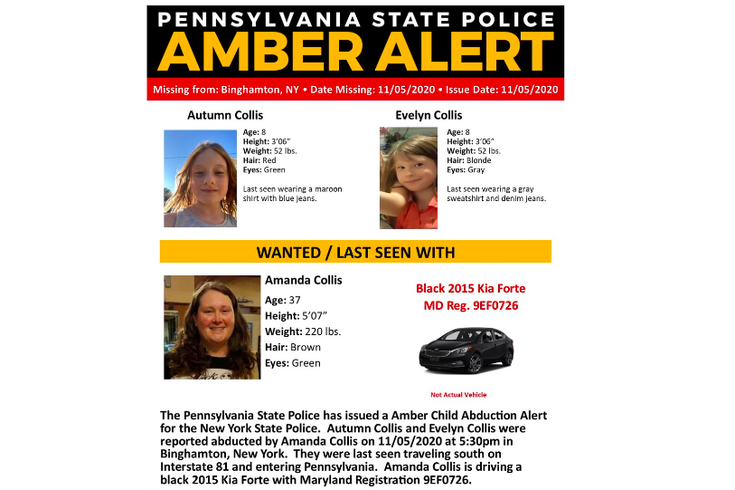 UPDATE: The two girls have been safely located, the Pennsylvania State Police said Friday around 1:40 a.m.

re: Amber Alert: Autumn and Evelyn Collis have been safely located.

Authorities are searching for 37-year-old Amanda Collis, who is believed by police to have abducted eight-year-old Autumn Collis and eight-year-old Evelyn Collis. The girls are from Binghamton, New York, which is about 10 miles north of the Pennsylvania's border in the northeast part of the state.

Investigators said Amanda Collis was last seen driving a black 2015 Kia Forte with a Maryland tag number 9EF0726. The girls were believed to be in the car, was was seen traveling south on Interstate 81 and entering Pennsylvania around 5:30 p.m. on Thursday. (Police had earlier been searching for a 1999 Black Eagle Talon with Maryland tag number 9884Z5, but later provided updated information on the Kia Forte).

Additional details from police were not immediately available.

Anyone with information on the whereabouts of Amanda, Autumn and Evelyn Collis is asked to call 911 or the Binghamton City Police Department at (607) 772-7083.