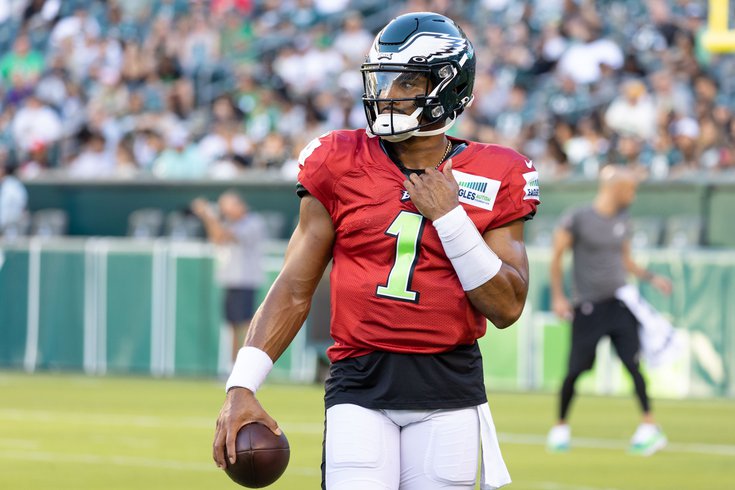 The Philadelphia Eagles' initial 53-man roster is set. Let's just get right to who made the team, and what might be next.

The Eagles' 2022 season will be squarely on the shoulders of Hurts, who has excellent personnel around him and coaching staff continuity. Minshew is a solid QB2 who can win should Hurts go down for a few games, especially against a weak schedule.

The Eagles like riding with three quarterbacks, but Reid Sinnett played his way out of a job. Expect Sinnett to join the practice squad, but also for the Eagles to explore other QB3 opportunities as the season approaches.

There are plenty of question marks at running back, with Sanders' durability and Gainwell's consistency. Might the Eagles add another someone before the start of the season? A power back would make some sense.

The Eagles were unable to trade Reagor, but that doesn't mean that they still can't/won't. In 2016, the Eagles traded Eric Rowe after final cuts, when they proved they were willing to keep him over cutting him.

Reagor aside, Smith and Brown are a top NFL duo, while Watkins and Pascal should form a compelling tandem in the slot.

This is arguably the best offensive line in the NFL, with an outstanding starting five, and plenty of depth behind them.

Most prognosticators had the Eagles keeping 10 offensive linemen, but I don't think anybody had the undrafted rookie, Josh Sills. He was the biggest surprise among all players to make the initial 53.

This was by far the easiest positional group to predict all summer long.

Marvin Wilson had a good camp, but there just wasn't enough room for a sixth interior defensive lineman. Tuipulotu entered camp on the bubble, but he was one of the most improved players on the team.

Overall, this is a very deep and talented group with a nice mix of youth, experience, and varying skill sets.

The Eagles simply couldn't expect positive results from this position a year ago when Genard Avery was the No. 1 SAM. Now they have an explosive speed rusher in Reddick, and a couple of promising young late picks in the two Johnsons.

Taylor's roster spot became dicey after some very shaky preseason performances, but he's in. The rest were locks.

Edwards is simply a good football player, even if not an elite athlete, while White had a strong camp and should be a significant upgrade over Alex Singleton.

The trio of Slay, Bradberry, and Maddox is one of the Eagles' best in years. McPhearson is the CB4, with Jobe cracking the roster as an undrafted rookie. Scott should play some safety in addition to slot corner.

Howie Roseman made a huge, surprise trade on cutdown day when he acquired Gardner-Johnson for a very reasonable cost, and released Anthony Harris. Gardner-Johnson will start alongside Epps.

The only question here was whether Siposs would survive, and barring any surprises post-cuts, it appears he will.

Jackson and Toth will miss at least the first four games of the regular season.