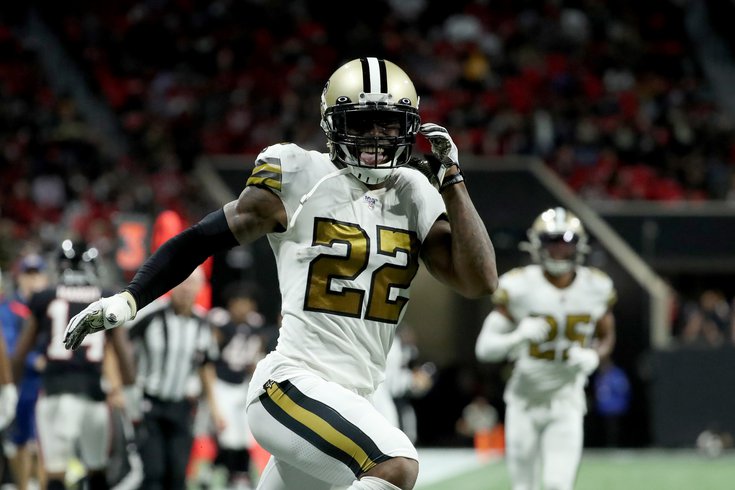 Chauncey Gardner-Johnson doing a Joe Horn-inspired celebration after an interception.

No one is busier than Howie Roseman. On a day where the Eagles needed to trim their roster down to 53 players, Roseman was active, continually tinkering with personnel in the hopes of a deep playoff run.

Things popped off Tuesday morning after the Eagles traded for Saints defensive back Chauncey Gardner-Johnson. Through the transitive property of trades, the Birds essentially traded J.J. Arcega-Whiteside and a fifth-round pick for Gardner-Johnson and a seventh. Talk about value.

The deal, understandably, sent football-starved Eagles fans into a frenzy and generated high praise from the media. The reactions keep pouring in:

ESPN analyst Mina Kimes is all-in on the Birds:

Holy smokes the Eagles roster is loaded like a baked potato. Unquestionably a top 5 (3?) group now.

FantasyPoints' Joe Dolan knows CGJ has that dawg in him:

Seriously, Eagles fans. I mean this with no exaggeration: Chauncey Gardner-Johnson may be at the peak of "Dawg In Eem Mountain." He is Sir Edmund Hillary of Dawg in Eem.

Chauncey Gardner-Johnson is the most Philly athlete to play in Philadelphia since Allen Iverson. Just an immaculate fit on a spiritual and emotional level.

We have a never-before-seen, wholly original nickname brewing for him:

I just thought of a new nickname for Chauncey Gardner-Johnson

Philly Twitter influencer Jeff McDevitt knows that CGJ is bringing trash-talking vibes with him to Philly:

if the guy the eagles just traded for has a 6 minute compilation of him trolling on youtube, i grade the trade a W pic.twitter.com/itXBZfpdVp

The Ringer NFL writer (and former Eagles blogger) Benjamin Solak seems to be calmly taking in the news:

THE EAGLES ARE WINNING THE SUPER BOWL https://t.co/utHuxF5gxi

"Good Morning Football" host Peter Schrager (my favorite non-"What We Do in the Shadows" show on TV) knows defensive coordinator Jonathan Gannon has an increasingly talented roster to utilize:

A fin note on the Philly move today… DC Jonathan Gannon’s specialty is DBs. What was once a team weakness is now one of its greatest strengths. @gmfb

IgglesBlitz's Tommy Lawlor throws out a lofty comp for Gardner-Johnson in Malcom Jenkins:

The Eagles did pretty well the last time they added a safety from the Saints. If CGJ can be anything like Malcolm Jenkins was, this is a home run.

Hoagie maestro Eric Fink is just a tad excited about the trade:

The @Eagles are going ALL IN this year.
Defense is LOADED on all three levels.
Offense has the best O-Line in football with diverse weapons at the skill positions. Jalen about to put a HURTING ON ALL HIS HATERS.