Analyzing the advantages and disadvantages of the Eagles' 2017 schedule 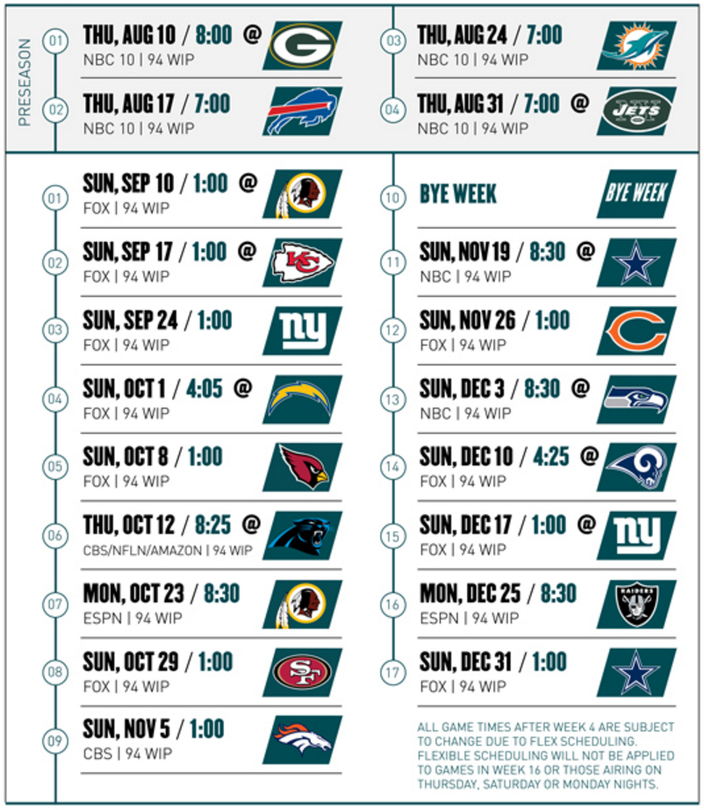 • A Week 10 bye is a big advantage. A season ago, the Eagles' Week 4 bye served as more of a detriment than an advantage. Oh, and that bye week comes before the Eagles' away game at Dallas.

• Last year the Eagles faced three teams coming off their bye week. This year they won't face any.

• The Eagles will have 11 days to prepare for their second matchup against the Redskins Week 7, which also happens to be a home game. That could be a nice boost against a team that has owned them in recent years.

• The Eagles have three straight home games Weeks 7 through 9. In fact, there is a gap of 38 days in between their Week 6 road game in Carolina and their Week 11 road game in Dallas.

• Thursday road games are very difficult. The Eagles have one this year in Carolina, Week 6.

• The Eagles got their wish when they requested to play two straight road games on the West Coast so they could just stay out there in between games, but it may have backfired. Weeks 13 through 15, the Eagles have a very difficult stretch of games. First they head to Seattle, where the Seahawks are among the best home teams in the NFL. Then they'll take a flight down the coast to Los Angeles, where they'll likely stay all week rather than come home to Philly to prepare for the Rams. And then finally, they'll return back to the East Coast, only to play their third consecutive road game against the Giants. The NFL typically tries to avoid scheduling three straight road games. In this case, the Eagles not only have three straight roadies, they have to play them very late in the season.

This looks like a fair schedule. There is nothing egregiously bad to complain about, and the Eagles got some significant advantages in regard to the placement of bye weeks.