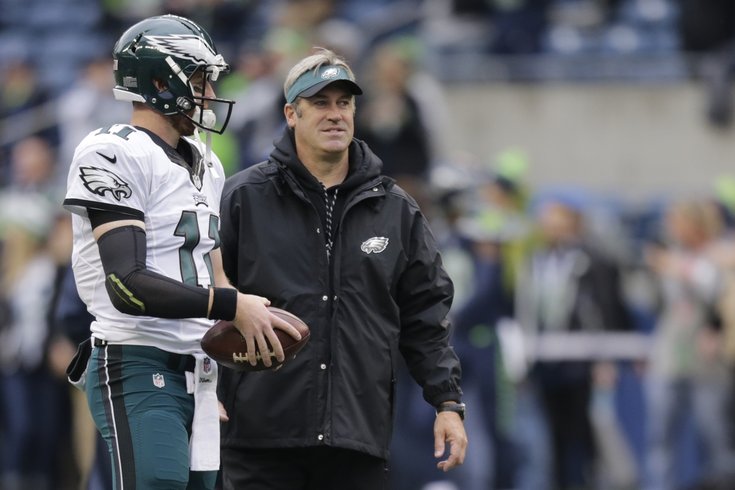 Should the Eagles make the playoffs, that would be a big accomplishment for a rookie head coach and quarterback, but at 5-5, there's a lot of work to be done.

On Thanksgiving Day, there were two very important games to the Philadelphia Eagles, and both went the Birds' way. Let's take a moment to re-calculate the Eagles' remaining games, playoff odds, and draft position.

The Eagles are not going to win the NFC East. For that to happen, the Eagles would have to win the rest of their games, while the Cowboys would have to lose the rest of theirs. That's not going to happen. If the Cowboys were to make a significant playoff run, that would almost certainly spawn a whole new wave of bandwagon Cowboys fans, if it hasn't already. Nobody needs that, and while it's certainly OK to be annoyed by that as a sidebar to this season, how the Cowboys fare the rest of the regular season in terms of wins and losses is irrelevant to Philly.

And so, Eagles fans should be turning their attention to the two wild-card spots, which are not at all out of reach. Let's take an updated look at the wildcard standings in the NFC:

If the season ended today, the Eagles would be ninth in the wild-card hunt, behind the teams listed above them in the standings above. However, as you can see, they are only one game behind the sixth-place Redskins. With a win over the Packers on Monday night, the Eagles could draw to within a half game.

Some notes on the Eagles' tie-breaker scenarios:

• The Eagles currently have a 3-5 conference record, which is the first wild-card tie-breaker after head-to-head games. That's bad, obviously. If the Eagles tied with a team they did not play this season, like the Buccaneers for example, they would lose out to them because of their poor conference record.

• Unless one of the remaining Eagles games results in a tie, they don't have to worry about a tie-breaker with the Redskins, who tied the Bengals in London earlier this season. Since the Redskins would have likely won tie-breakers over the Eagles based on a head-to-head win and a better conference record, their tie against Cincy was just as good as a loss from the Eagles' perspective.

• Should the Eagles tie with the Vikings, the Eagles would have the head-to-head advantage over them. We'll have to wait and see how the Eagles' second game against the Giants goes to better determine who might win that potential tie-breaker.

• Like the Cowboys, there are two other teams in positions of power within their respective divisions. In the NFC West, the Seahawks have a commanding three-game lead on the Cardinals. The Eagles likely won't have to worry about their loss to Seattle biting them later in a tie-breaker scenario with them. In the NFC North, when the Lions completed their season sweep of the Vikings on Thanksgiving, they essentially took a two-game lead over them for the division lead. If the Lions are able to hang on and win the NFC North, again, the Eagles likely won't have to worry about losing a head-to-head tie-breaker to them.

• There are a whole set of other rules when three teams have the same record. We won't dare get into those scenarios yet with six games to play.

Looking ahead at the Eagles' schedule going forward, it is not as daunting as it once seemed. The Eagles' remaining opponents:

Some notes on the rest of the schedule:

• While the combined record of the Eagles' remaining opponents is 35-25-1, a nine-game swing within that happens with the Cowboys' 10-1 record. If the Cowboys head into that Week 17 matchup with the No. 1 seed in the playoffs wrapped up, the Eagles may actually get to face the Cowboys' reserves, which could mean Mark Sanchez time once again in Philly. Additionally, two teams that looked like powerhouses at the start of the season (the Packers and Bengals), look anything like that at the moment.

• As the above shows, the Eagles have four home games remaining, and two road games. The Eagles are undefeated (4-0) at home so far this season.

The Eagles are the third and final road game of those three-game stretches in both instances. That is a huge advantage.

As for the Eagles' draft position watch, the Birds own the Vikings' first-round pick after the Sam Bradford trade. If the season ended today, the Vikings' draft pick owned by the Eagles would be 19th overall.