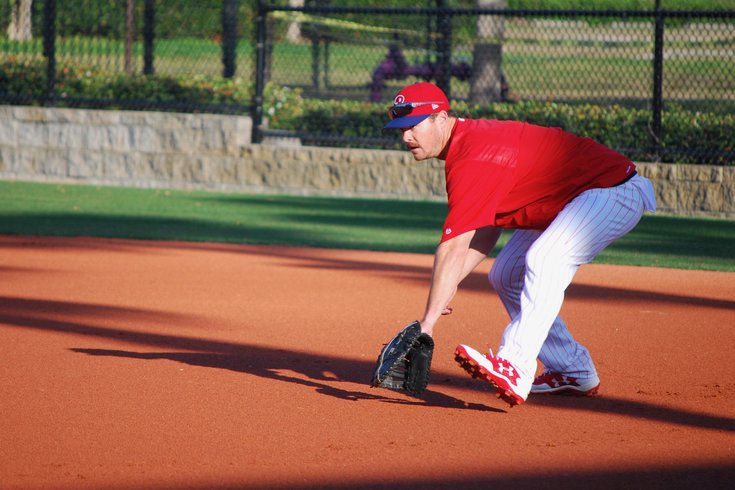 Andrew Knapp has spent his mornings in Clearwater, Fla., getting extra work both with infield and catching instructors in order to put himself in the best position to win a job on the Phillies bench for Opening Day.

CLEARWATER, Fla. – There have been more than a few glimpses of the future in Clearwater in the last three weeks and it’s been promising for a Phillies organization in dire need of a jolt of talented offensive youth.

The potential was on display during a six-run seventh inning at Spectrum Field on Saturday against the Atlanta Braves. Roman Quinn doubled and scored, Jesmuel Valentin walked and scored, Dylan Cozens hit a two-run single and stole a base, too.

“The IronPigs are really carrying this team, I’ll tell you what,” manager Pete Mackanin kidded.

That 7th inning tho. pic.twitter.com/Oawvs55rTo

But the biggest hit may have come from a player who has already done his time in Allentown, one that Mackanin could utilize on Opening Day in Cincinnati in four weeks. With the score tied and two outs, Andrew Knapp ripped an opposite-field laser of a line drive over the head of Atlanta left fielder Micah Johnson to give the Phillies the lead for good.

Knapp, who started 103 games at catcher at Triple-A in 2016, had come into the game a half inning earlier to play first base. The 25-year-old has spent the first three weeks of camp bouncing all over the Carpenter Complex, from the back fields for catching work to the short field to get extra, early-morning work at first, in order to increase his versatility and give himself the best shot at making a major league roster for the first time.

“Whatever, just throw it all on me,” Knapp said with a laugh earlier in the week. “Bring it on.”

Of all the hitting prospects the Phillies have acquired in drafts or trades in the last four years, Knapp might be the first to carve out a role for himself with the Phillies. The Cal-Berkeley product entered camp as the favorite for the backup catching job behind starter Cameron Rupp and hasn’t done anything to lose ground since games began last week.

“From what I’ve seen, he looks like a pretty solid catcher,” Mackanin said. “He hasn’t been tested that much but I like the way he looks behind the plate. He looks soft, he’s quiet, he gives a good target, I think he calls a pretty good game. He does a lot of nice things. He’s a switch hitter and he can play first base. So, he’s got a good chance.”

Bryan Holaday and Ryan Hanigan, two non-roster veterans with ample big league experience, would figure to be Knapp’s main competition for the backup catching job. Jorge Alfaro, who also contributed in the aforementioned seventh inning with one of his two doubles on Saturday, is ticketed for the starting job at Triple-A in order to get more seasoning both at and behind the plate.

“Last year it was more happy to be here, take it all in, listen to (Carlos Ruiz) as much as I can,” Knapp said. “Now it’s more, I’m trying to get these pitchers to want to throw to me and prove that I can be that guy.”

Mackanin said Knapp will begin to get more reps behind the plate this coming week when the team loses one of its seven catchers in camp – Alfaro is playing for Colombia in the World Baseball Classic). Although Knapp has always been known more for his bat (he had a breakout season in Double-A in 2015 to win the prestigious Paul Owens Award) his defensive acumen has improved with the workload he’s had in the last two seasons after missing some development time in 2014 after undergoing Tommy John surgery.

“I think he’s made good strides,” said long-time minor league catching coordinator Ernie Whitt. “He’s still working on it. I think in this industry you’re constantly working to improve and he’s been willing to do that. There’s so much you do, the normal stuff of blocking the ball, throwing the ball, footwork, that’s all part of it.

“The biggest part is learning your pitching staff, getting the best out of them. And Andrew is very good at that. To me, he’s further ahead handling the pitching staff than he is defensively.”

Traditionally, backup catchers in the major leagues are often strong defensive backstops, guys that can be counted to handle the pitching staff for a start or two every two weeks. Knapp probably doesn’t quite fit into that box, as he’s a prospect that would also benefit from a little more playing time.

But is his defense MLB-ready?

“I truly do believe that he’s capable of doing the job, I really do,” Whitt said. “Plus as an added bonus he can swing the bat a little bit. I think he will continue to get better defensively.”

Knapp’s versatility (being a switch-hitter who can also play first base) would seem to play well into a possible five-man bench that would give Pete Mackanin options. Right-handed hitting Aaron Altherr is strong defensively in all three outfield positions, veteran left-handed hitter Chris Coghlan can play pretty much everywhere on the field except shortstop, ditto switch-hitter Andres Blanco (who can play shortstop). Brock Stassi, another IronPig looking for his first big league promotion, has shown off a strong left-handed bat this spring and can play first base and left field.

Knapp hasn’t played the Opening Day 25-man roster game in his head, though. He’s been too busy running from one field to the other every morning to keep his catching mitt and first base glove ready when opportunity calls.

“I’m trying not to think about making the team as much as just going out there and doing what I need to do,” he said. “If I play the way I need to play and show what I need to show, then it will take care of itself. It’s definitely more of a ‘let’s go win a job’ type attitude.”