Rep. Andy Kim donates blue suit from the Capitol insurrection to the Smithsonian 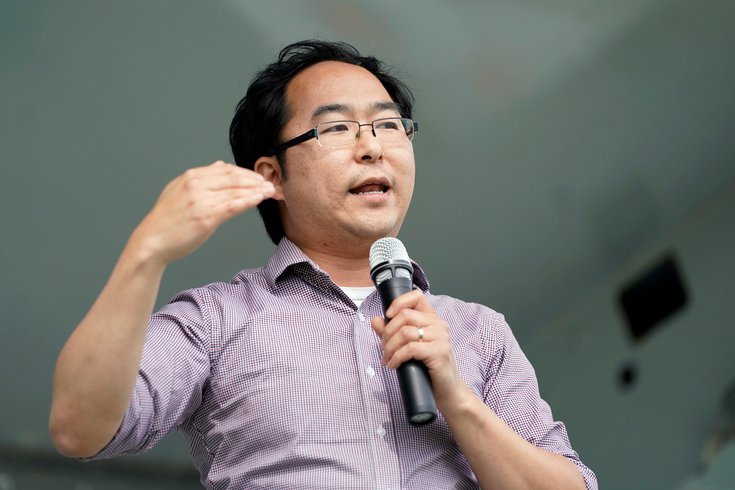 U.S. Rep Andy Kim, D-N.J., donated the blue suit he wore during the U.S. Capitol insurrection to the Smithsonian, saying it came to be seen as a symbol of hope.

U.S. Rep. Andy Kim helped clean up the U.S. Capitol in the aftermath of the Jan. 6 insurrection, staying deep into the night to assist cleanup crews.

Now, the blue suit he wore that day is headed to the Smithsonian.

The Democratic lawmaker, who represents New Jersey's third congressional district, said the museum reached out to him because it was looking for items that memorialized the insurrection. Kim donated the suit earlier this month.

The American History Museum confirmed that it has received the suit, but it does not have any immediate plans for its display.

Kim told NBC that he originally bought the J. Crew suit to wear to President Joe Biden's inauguration. Instead, he ended up wearing it as he cleared debris from the Capitol — an act that received national attention.

"This suit meant a lot of different things for me," Kim told NBC. "It was originally a suit that I purchased in a celebratory way … excited to have a new suit to wear for such a big occasion. The suit then took on a different meaning where I couldn't help but see the tragedy of Jan. 6 and then it became a suit that I started to see reflected in people around this country. They see in it a sense of hope and resilience from that day."

In a Twitter thread, Kim said he wanted to make sure the insurrection, in which former President Donald Trump's supporters disrupted the certification of election results, are remembered.

The suit kept bringing back "terrible" memories from that day, and he couldn't separate the suit from the events that took place, Kim said. Still, he came to see it as a form of resilience and hope.

6 months ago today I wore this blue suit as I cleaned the Capitol after the insurrection, now I just donated it to the Smithsonian. Jan6 must never be forgotten. While some try to erase history, I will fight to tell the story so it never happens again. Here is one story…(THREAD) pic.twitter.com/GKePd1ZMrr

"Like my suit, what I did on Jan 6 on its face was unremarkable," Kim wrote. "I saw a mess and cleaned it. I wanted to right the wrongs of that day as quickly and as tangibly as I could. Neither my suit nor my actions are on their own worthy of memory, but the story didn't end there."

Kim again wore the suit on Jan. 13 when he cast his vote to impeach Trump. He said it still had dust on the knees from the insurrection. He then vowed to never wear it again.

"I even considered throwing it away," Kim wrote. "It only brought back terrible memories. I could never separate that suit from the events of Jan 6. I hit it in my closet as I never wanted to see it again."

But when he received thousands of cards from people who had seen pictures of him clearing the wreckage from the Capitol, he realized it gave them a sense of hope.

So when the Smithsonian asked for it, he said yes.