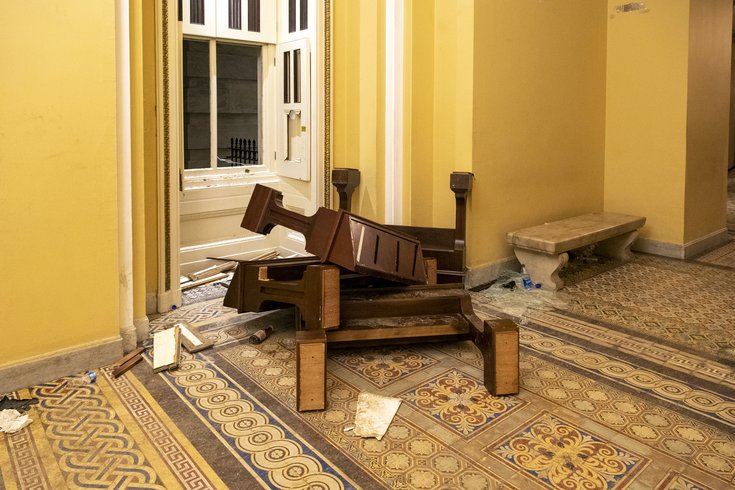 In the aftermath of Wednesday's insurrection on the U.S. Capitol, where four people died and dozens were arrested, much of the mess and wreckage inside the government building remained to be cleaned up.

Both Congressional chambers worked through the night to eventually certify President-elect Joe Biden's Electoral College victory, but that wasn't a wrap for U.S. Rep. Andy Kim.

The New Jersey congressman was pictured assisting cleanup crews at the Capitol early Thursday morning. An estimate for damages has not yet been determined.

Rep. Andy Kim, D-N.J., helps ATF police officers clean up debris and personal belongings strewn across the floor of the Rotunda in the early morning hours of Thursday, Jan. 7, 2021, after protesters stormed the Capitol in Washington, on Wednesday. (AP Photo/Andrew Harnik) @ap pic.twitter.com/hBsC70uxPW

Kudos to @AndyKimNJ for literally doing the dirty work for democracy (and not having staff document it for a fundraising email.) Photo via: @steve_dorsey pic.twitter.com/3xvfF2YzLl

This is our Congressman. A statesman. A patriot. We must follow his leadership come together and move forward. #AndyKim #NJ3Votes https://t.co/ofTMiOMfL6

Struck by this photo taken by @andyharnik.

Rep. Andy Kim, D-N.J., cleans up debris and personal belongings strewn across the floor of the Rotunda in the early morning hours of Thursday, Jan. 7, 2021. (AP Photo/Andrew Harnik) pic.twitter.com/LqvTEx9BYO

This is a dark day for our democracy and our country. The Capitol is a sacred land in our nation and should not be a place under siege. I am safe but heartbroken by this assault on our beautiful Capitol and our democracy.

I want to thank @PIX11News for taking a few minutes this morning to talk about the horrific events at the Capitol yesterday. We need to pick up the pieces - literally and figuratively - of the damage we saw yesterday. I stand ready to do the hard work of doing exactly that. pic.twitter.com/vipUlomAwo

"It was horrifying to see one of the temples of our democracy treated in that way, and we really didn't know what was going on at that time," Kim said. "We didn't know if the people coming in were armed."

Kim went on to explain his decision to help with the clean-up effort.

"The Capitol is our home," Kim said. "As I was cleaning up, I saw a plaque that reminded us that George Washington laid the cornerstone of that building. It's, in my opinion, the most beautiful building in the country. I love and I think last night with all the pain that was happening and the crisis, I felt in some ways my patriotism renewed and heightened, actually."

On Wednesday, Kim tweeted about the mob attack at the Capitol, saying he was safe but heartbroken by the events in Washington, D.C.

This is a dark day for our democracy and our country. The Capitol is a sacred land in our nation and should not be a place under siege. I am safe but heartbroken by this assault on our beautiful Capitol and our democracy.

Kim won his reelection bid in November against GOP challenger David Richter, having flipped the district from red to blue in 2018. He represents portions of Burlington and Ocean counties.

Looking ahead, Kim said he believes the country has a lot of work to do to overcome the climate that led to Wednesday's chaos at the Capitol.

"We've just gotten to this level where the partisanship just becomes so corrosive, and toxic to our communities and our society," Kim said. "We've gotten to the point where we just do not see each other as Americans first. I think that that's a real shame and a huge problem. This is not something we can legislate away or investigate away. This is going to be a long road ahead for recovery."