And we could not be more excited 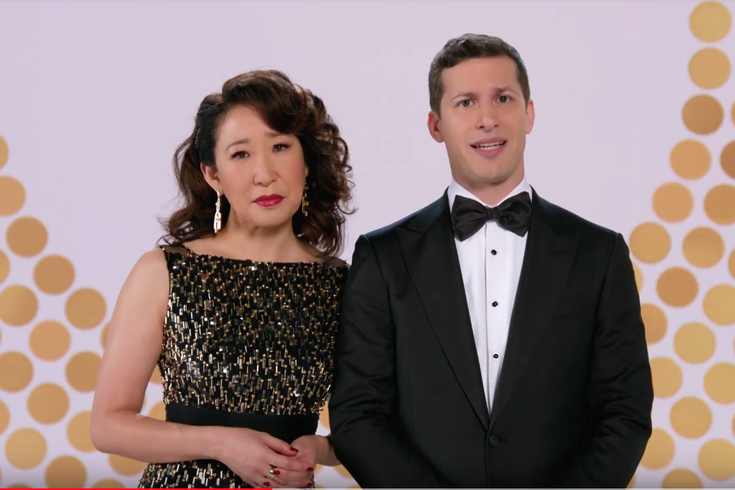 Andy Samberg and Sandra Oh will be hosting the Golden Globes this Sunday on NBC. The pair were chosen for their undeniable comedic chemistry that was noted when the two presented an award together in September.

The pair stole the Emmys with their award presentation when Oh decided to "be in the moment" and tore the winner’s envelope in half. After Samberg freaked out, she started naming whatever came to mind, including "La La Land" ( in reference to the "Moonlight"/"La La Land" mixup at the Oscars in 2017) and a supposed ex-boyfriend from high school.

"They were terrific together. They had great chemistry," executive producer Barry Adelman told USA Today. "If you've got the right chemistry, it's great to have a (co-hosting) team.”

NBC has released three promos in anticipation for Sunday night’s award show. In the first promo, 'best friends' Oh and Samberg talk of their excitement to host, adding in their secret best friend handshake which they can’t seem to get right. At the end Samberg yells, “Best friends!” Oh shakes her head, “We just met.”

In the second promo Oh and Samberg act glamorous, throwing out random words with a silky accent, like "celebrities" and "slap fights." Though the most topical and most recent promo pokes fun at the Oscars and their struggle with attaining a host.

Oh mentions “Tune in to the Golden Globes to see if we talk about the elephant in the room.” As Samberg chimes in, “Or if we’ve gotten it to leave by then.” As Oh motions to a door, “Seriously, there’s an elephant in that room. Please help us.”

Samberg hosted the Emmys in 2015. This will be Oh’s first time hosting an awards show.