Source: Anna Duggar feels it's 'not Godly' to get mad at husband Josh

After Josh Duggar checks into rehab, many wonder how wife Anna will respond to scandals 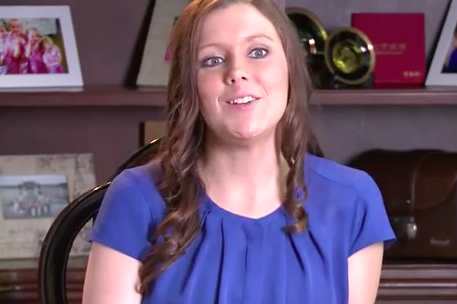 Anna Duggar, 27, appears in episode of reality show '19 Kids and Counting,' which was canceled by TLC in July.

As the portrait of a morally upright Josh Duggar continues to smear following revelations of molestation, cheating and a pornography addiction, Duggar's spouse, Anna, remains steadfast in her support of the former reality star and executive director of the Family Research Council's nonprofit FRC Action.

In an exclusive interview with People, a source close to the Duggar family revealed that Anna's reaction to the widening scandal has been highly reserved and tacitly supportive.

"She doesn't get mad," a source close to the Duggars told People. "You are not allowed to get mad. It's not godly for a woman."

According to the source, since her marriage to Josh, Anna's demeanor and personality have transformed into a likeness of Josh's mother Michelle, mirroring her ultra-conservative Christian lifestyle that demures to patriarchal influence.

The source added that Anna, a 27-year-old mother of four, has almost no support network outside the Duggar family. "Aside from Duggarville, no one can get to her."

In a brief encounter with Anna, the source said she told her that she has not absorbed everything and that she is "going to be pissed off" and angry.

Two anonymous members of the Duggar family, meanwhile, told Perez Hilton that "there is a dark cloud over the family" and "Josh's integrity is gone."

Josh, also 27, checked into a long-term rehab center last week after releasing the following statement about his infidelity and self-professed immorality:

"I have been the biggest hypocrite ever. While espousing faith and family values, I have secretly over the last several years been viewing pornography on the internet and this became a secret addiction and I became unfaithful to my wife.

"I am so ashamed of the double life that I have been living and am grieved for the hurt, pain and disgrace my sin has caused my wife and family, and most of all Jesus and all those who profess faith in Him.

"I brought hurt and a reproach to my family, close friends and the fans of our show with my actions that happened when I was 14-15 years old, and now I have re-broken their trust.

"The last few years, while publicly stating I was fighting against immorality in our country, I was hiding my own personal failings.

"As I am learning the hard way, we have the freedom to choose our actions, but we do not get to choose our consequences. I deeply regret all hurt I have caused so many by being such a bad example.

"I humbly ask for your forgiveness. Please pray for my precious wife Anna and our family during this time."