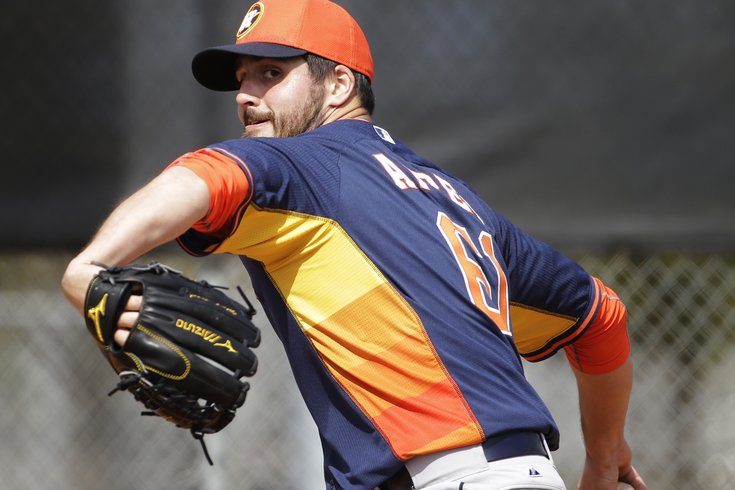 Former No.1 overall pick Mark Appel is eager to make the most of his change of scenery this winter. He joined the Phillies last month in the trade that sent Ken Giles to Houston. (David Goldman/AP)

The composition of a contending baseball team – one that an organization hopes to turn into a championship team – is not the final product of a perfect formula. There isn’t a direct recipe a front office can follow.

You have to draft well, obviously. You have to develop that raw talent and churn out major league players.

It takes more than homegrown players, too.

Sure the 2008 World Champion Phillies were filled with the likes of Cole Hamels, Jimmy Rollins, Chase Utley, Ryan Howard, Carlos Ruiz, Pat Burrell, Brett Myers and Ryan Madson. But others – like Jayson Werth and Shane Victorino – came from other organizations eager for another chance to prove themselves as big league players and fared well in that pursuit to become important cogs on that same team.

On Jan. 14 – a month and four days before camp officially opens in Clearwater, Fla. – it was way too early to determine if Mark Appel and Tyler Goeddel will turn out to be those types of talents, players who make the most of a change of scenery. But it’s surely a wager the new-look Phillies front office will make as they enter Year 2 of the organization’s rebuild.

And it’s also a path both Appel and Goeddel are eager to begin next month.

"The fact that the Phillies sought me and traded for me, it means a lot," Appel said. "My goal is to work as hard as I can, be the best teammate I can, have fun along the way, and show the Phillies why they traded for me.”

“When the Rays didn’t protect me I was obviously disappointed,” said Goeddel, a versatile, righthanded-hitting outfielder who was selected with the first pick in the Rule 5 Draft last month. “But at the same time, it created and even better opportunity. I’m so excited to be a part of this organization. It’s a great time to be a Phillie right now if you’re a young player. I couldn’t ask for a better opportunity right now.”

Appel, meanwhile, is a former No.1 pick of the amateur draft (and a two-time top 10 pick) who also came to the Phillies in December. He was among the five-player return from the trade that sent Ken Giles to the Houston Astros.

“A fresh set of eyes is always beneficial,” Appel said of joining a new organization. “You have new coaches to bounce ideas off, new minds. … So there’s definitely a lot of advantage to it. The fact that the Phillies sought me and traded for me, it means a lot. My goal is to work as hard as I can, be the best teammate I can, have fun along the way, and show the Phillies why they traded for me.”

Appel and Goeddel were among the eight players who spent this week in Philadelphia as part of the Phillies annual Prospect Education Program.

The seven other prospects joining Appel and Goeddel were outfielder Nick Williams and right-hander Jake Thompson, who came from Texas in the Cole Hamels trade, switch-hitting catcher Andrew Knapp, and right-handed pitchers Alec Asher, Jimmy Cordero and Ricardo Pinto. The nearly weeklong seminar included an outing to a Flyers game, hanging out with Roy Halladay, a trip to MLB Network in North Jersey, and a media session to familiarize themselves with dealing with the press.

In the latter session, on Thursday afternoon, you couldn't waive a bat inside the home clubhouse at Citizens Bank Park without bumping into a prospect eager to graduate from the minor leagues to the major leagues. Of course, this wouldn’t be different than in any in-season minor league clubhouse in any organization.

But with the current state of the Phillies – where a Who’s Who of star veterans have been shipped out in the last 15 months to bring in younger players – these minor leaguers know there is real opportunity at making that leap sooner rather than later.

Appel will be one of the more interesting names on the Phillies spring training roster next month.

It was just 3 1/2 years ago when the Pittsburgh Pirates selected him with the 8th overall pick in the amateur draft, couldn't sign him, saw him return to Stanford University and then get drafted by the Houston Astros with the top pick in the 2013 draft. So he obviously has the natural talent that at least two teams believed would translate to becoming a difference-making, top-of-the-rotation starter.

Joe Jordan, the Phillies director of player development, wouldn't pinpoint an exact plan the Phillies have for fixing Appel. But he is confident that will happen.

“I want to see him throw,” Jordan said Thursday. “I have some really good pitching instructors, coordinators, and coaches. We’re going to get him over the hump. … The weapons are definitely there. We saw that in the reports we got last summer. I’m just looking forward to getting him into camp, watching him throw, and with his help, obviously, we’ll put together and plan and maybe we can crack the code, if you will, and get him where he needs to be.”

From a personality standpoint, Appel is the positive-minded type who sees his journey from former No.1 pick to uncertain prospect as “character building.” Appel seems less focused on expectations – when will you reach the big leagues! – and more on personal goals.

“I think there’s a difference between expectations and goals,” he said. “It’s always been a goal of mine to get to the big leagues and I want to get there a quickly as possible. Because ultimately I want to help the Phillies win baseball games. But the expectation, because there are so many things that go into when a player is called up, I can only be accountable for my work, the work I put into my bullpens, how I perform in spring training. That’s really all my focus is.”

Goeddel, 23, is similarly focused on what he can do to make the best impression in Clearwater. As a Rule 5 pick, Goeddel has to make the major league roster – and stay on it for the duration of the season – or else be offered back to Tampa.

Given the Phillies rebuilding situation – and given the organization’s recent history of Rule 5 picks, a group that includes more than a couple who have stuck around, Victorino, David Herndon, Michael Martinez and Odubel Herrera last year – Goeddel should have a very good chance of eking out a role on the 2016 Phillies.

With regular production, he could even follow Herrera’s path to becoming a starter in the outfield, too. Goeddel hit .279 with a .783 OPS, 12 home runs, 17 doubles, 10 triples, and 28 stolen bases while getting action at all three outfield positions in 123 games at Double-A Montgomery last season.

“The tools were the most attractive thing,” Ondo said. “And each year he seemed to progress and get better and better.”

As they continue to take stock of a growing group of prospects in 2016, the Phillies front office can only hope their newcomers continue on that path this summer.

PHILL-INS: Former Phillies manager Ryne Sandberg is returning to the Chicago Cubs as a club ambassador, according to multiple reports. Sandberg, who was drafted by the Phillies but spent the majority of his Hall of Fame career with the Cubs, resigned as Phillies manager in June of 2015. ... The Phillies will take part in their annual January "Hot Stove" banquet tour at their minor league affiliates next week, with stops in Williamsport (Monday), Reading (Tuesday), Lakewood (Wednesday), and Lehigh Valley (Thursday). ... As a part of next week's #BackInTown campaign next week, manager Pete Mackanin will host a Twitter chat from the team's Twitter page next Thursday at 3:30 p.m.