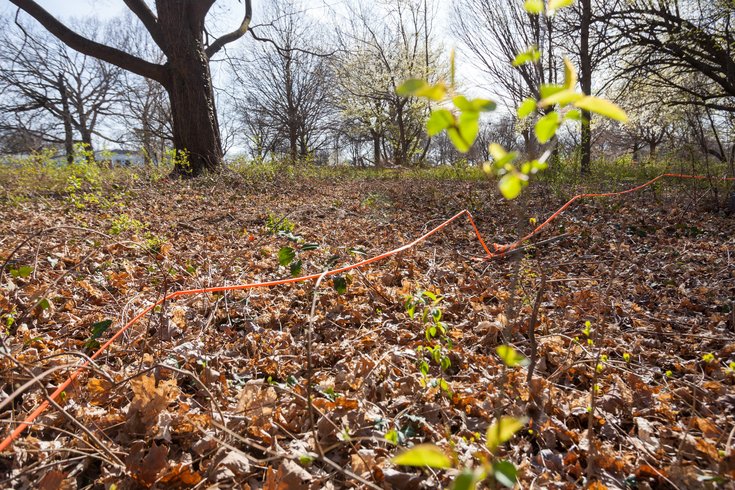 Orange marking tape remains in the location of a recent archaeological dig that took place just outside the grounds of the Shofuso Japanese House and Garden.

Three years ago, on an acre of land overgrown with poison ivy, just footsteps from Shofuso Japanese House and Garden in West Fairmount Park, Shofuso Executive Director Kim Andrews threw on a pair of long boots and old jeans and began rummaging.

Though what she was searching for was certainly elusive, if not niche, her mission was important to her. A longtime scholar of the 1876 Centennial International Exhibition, she was determined to find evidence of a Japanese bazaar that's long been known about, but often overlooked as a piece of history in Philadelphia. Its shadow lingering somewhere in Shofuso's backyard, its story was on a back burner for decades as the house and garden gained acclaim.

She wandered through trees and bushes that spring day until finally, kicking around, she felt pavement beneath her feet. Immediately, she realized it was a sidewalk that once outlined the two-building bazaar constructed 140 years prior.

The light bulb went off.

"It was one of those thunderstruck moments of ‘Oh my God, this is it! This is the place!’" Andrews told PhillyVoice. "I went out there looking for it and knew it had to be somewhere around there, but didn’t think I would actually be able to find the sidewalks."

And thus, with a kick of her boot, began a journey to uncover and interpret one of the centennial's most precious exhibits.

What is the Japanese bazaar?

The bazaar, a U-shaped and 40-foot-deep structure then chock-full of Japanese exports, was created by carpenters who temporarily immigrated for the centennial exhibition -- a World's Fair-like cultural congregation of 36 other countries that pitched up exhibits across Fairmount Park. Japan's two-building bazaar was the first fully formed Western showcase of Japanese culture -- significant, as Japanese culture was an unknown to Philadelphians (all Western nations, really) until Navy Commodore Matthew Perry's expedition in 1853 opened up Japan to trade and travel. Even in the two decades that sandwich the centennial and the island nation's opening, Andrews explained, a formal presence of Japanese culture in Western society amounted to little more than a table at a World's Fair in France in the early 1870s.

But here's the kicker: When the centennial ended, the bazaar left a footprint of Japanese culture in its wake, forever cementing that section of the park, located at the intersection of Horticultural and Lansdowne drives, as an unlikely Japanese destination in Philadelphia.

That began in 1904 when John Morris, namesake of Morris Arboretum, commissioned a Japanese garden adjacent to the site of the bazaar (which has since disappeared) and continued when Japan gifted a Buddhist temple gate to Fairmount Park in 1905 that would remain there until it burned down in 1955. The enduring Shofuso House, meanwhile, was donated to the city of Philadelphia by Japan shortly after the fire; it had previously been an exhibit built for the Museum of Modern Art.

For Andrews, that bazaar is not just a symbol of American and Japanese relations, but a way to place the site of Shofuso in the grand context of Philadelphia history at a time when foot traffic through Shofuso is up 30 percent year-over-year.

"For me, [the bazaar] is the greatest connection of all, because it takes us into Philadelphia history," Andrews said. "[Shofuso] can’t be Ben Franklin, but we have our own place in history, and it’s not just Japanese sleeping on the floor.” 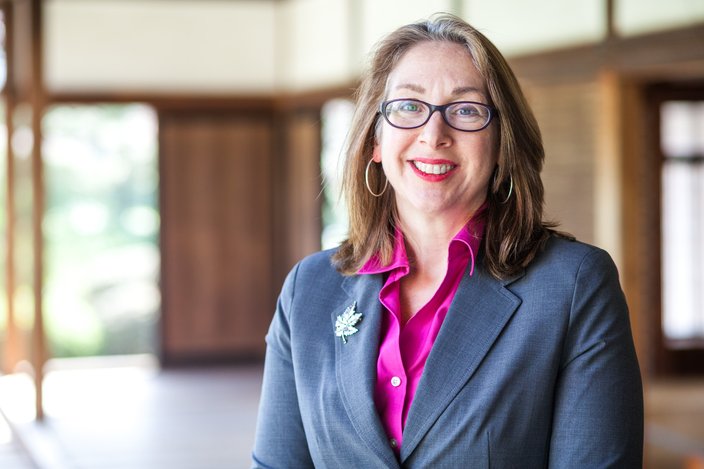 Around the same time Andrews discovered the pavement, she conducted some personal research, combing through old copies of Harper's Bazaar and Atlantic Monthly. She was captivated by descriptions of the bazaar's elaborate tile-topped roof (it remains an architectural marvel by any standard) and the 20-plus workers who lived out of its longhouse for 10 months. Curiously, though, she realized there existed no real explanation of what happened to the bazaar.

Which, of course, prompted the question: Underneath all that overgrowth of trees and poison ivy, might there be an answer?

Digging up the past

The search for answers about the bazaar began looking a lot more fruitful when, in 2015, the William Penn Foundation awarded a $25,000 grant to excavate the site of the bazaar. Andrews got right to work: By August, she'd hired AECOM Burlington, a Burlington County-based archaeology team, to dig up the site for remnants of the bazaar, using ground-penetrating radar as a guiding tool.

On the first day of digging, out came a monkey bobblehead.

"The first day they dug that up -- talk about early gratification," Andrews laughed. "I didn’t expect we’d find much of anything." 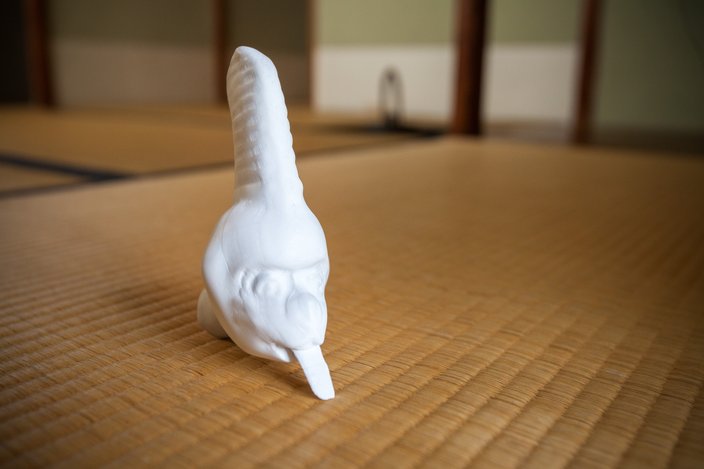 A 3-D print of a monkey bobblehead found at the West Fairmount Park archaeological site. Once sold in the Japanese bazaar, it's a caricature of a kabuki theater character.

But as the days went on, more objects sprung up: broken pieces from teapots, postmolds, a sake bottle, ceramic tiles from the structure's roof -- all mysteriously still there. By the end of the excavation, Shofuso walked away with 2,209 new artifacts -- many of them shards or fragments of artifacts -- in its collection, including seven Native American stone tools found by accident.

Though the buildings' joinery was not found, the objects discovered are enough to offer insight into the motivations behind the bazaar and serve as a jump-off point for further research. Most telling among those objects, Andrews explained, was the monkey bobblehead. By connecting its presence with what had been written about the bazaar in Japan, they determined its value was a little like a Philly "LOVE" figurine sold at an Old City gift shop: more a souvenir than an authentic representation of culture.

"Americans at the time would think these are -- and to some degree, they were – novel Japanese works of art which we’d never seen. We’re supposed to think of it as part of traditional culture, and it was sold that way," Matt Harris, AECOM project manager of the dig, told PhillyVoice. "But documentation in Japan is ‘Americans will love this stuff; let’s make more of them.’ It was an economic venture.

"We like to romanticize it -- as we do with a lot of Japanese things in our culture, for whatever reason. But nobody was being dumb about how they make their objects and where they were sourcing them from." 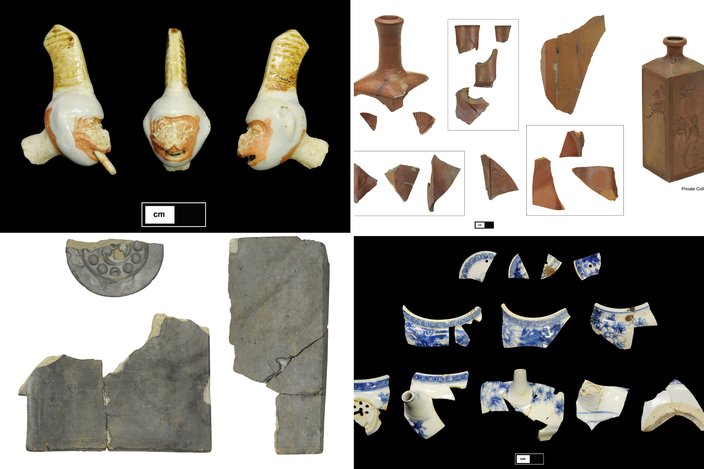 Objects discovered by AECOM Burlington, shown from top left going clockwise: a monkey 'nodding head,' part of a full ceramic figurine sold at the bazaar; fragments of a saki bottle, likely used by Japanese carpenters who lived in the exhibit; bazaar roof tiles, one of which has a water symbol at its center meant to protect against fire; shards of a Japanese teapot.

The other significant find was the tiles, one of which was engraved with the name of their manufacturer. And, aside from also being a new addition to Japanese architectural history (they'll be taken to Kawara-Kan Tile Museum in Kyoto), those tiles may be useful in eventually determining whether the bazaar, likely stripped for spare parts, may still exist today.

"Everyone assumed [the bazaar] was taken away with the other buildings after the centennial, but it turns out there was a sizable lobbying effort to keep it preserved because the architecture was so amazing," Harris explained. "That went on for a little bit and fizzled out after a number of months, and a plasterer -- I believe on Pine Street -- had bought the centennial building for $150; we don’t know what happened after that ...

"The question now," he added, "is could the Japanese bazaar exist somewhere else in the city and have been reincorporated into something else?"

For now, that question goes unanswered -- but maybe not for long.

Earlier this year, Shofuso received an additional $30,000 grant, this time from the United States-Japan Foundation, for a second archaeological dig set to take place in September. That excavation, Andrews explained, will double as a community outreach program: Shofuso will work with neighboring teens and The Franklin Institute to create projects based on archaeological findings; those teens will act as weekend docents for Shofuso visitors. There's also an educational curriculum being planned for outreach with surrounding West Philadelphia schools. 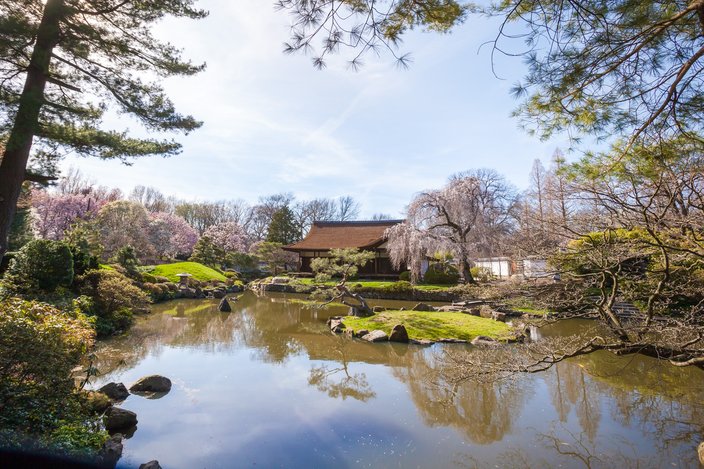 The Shofuso Japanese House and Garden in West Fairmount Park, captured on March 30, 2016.

In the meantime, objects found continue to be processed and sorted for a three-week exhibit, to be on display at Shofuso starting May 11 -- the 140th anniversary of the centennial. The exhibit, viewable for the price of standard admission, will consist of select objects and be woven together to tell a story of the continuity of Japanese culture, particularly highlighting the difference between Japanese and American architecture.

To boot, she hopes to eventually secure funding to restore the site in some capacity -- likely as a sort of "ghost house" of the bazaar, though those details are still fluid.

But the larger purpose of the project, Andrews explained, is to remind people that Philadelphia history doesn't start and end with the American Revolution. Nineteenth-century Philadelphia history -- the centennial, especially -- deserves its moment in the spotlight, right next to Ben.

"The centennial exposition is, for me, a way to raise Shofuso’s profile in the history community. In Philadelphia, it's ‘Yay Independence Hall and Colonial times,’ and all that," Andrews said. "But Shofuso history is not just a piece of Japanese history; it’s a piece of Philadelphia history."