The numbers don't jive with the vocal #WalkAway movement 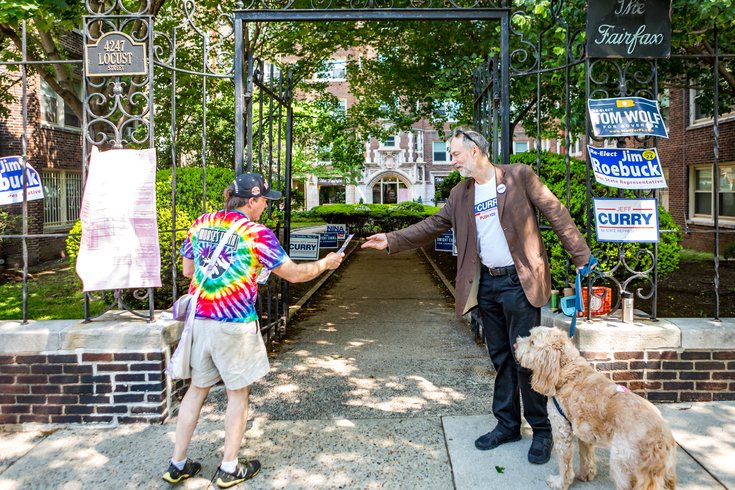 Outside of the Fairfax Apartments on Locust Street in West Philadelphia, volunteer Eric Orts hands information about candidate Jeff Curry to West Philadelphia resident Dean Ritts, as Ritts walks into the polling location, Tuesday, May 15, 2018.

With the midterm elections one month away, voters are starting to zero in on their upcoming decisions. People realizing their beliefs and values have shifted, or party lines have shifted, since the last election is nothing new.

But one sign in Lackawanna County in September referenced a huge departure from the left ahead of the elections, including the hashtag #WalkAway.

#WalkAway is an online “movement” tracking Democrats who’ve left the party because it’s leaning too far left. The movement has seen a national platform since early July, when the Washington Post examined it at length.

So, was that sign telling the truth? Is there a big ground swell movement of Democrats in Pennsylvania fleeing the party for the right side of the political spectrum?

Fact-checking site Politifact Pennsylvania took a close look at the question and found that… well, no, things are about normal for now.

This year, 28,595 Democrats in the state of Pennsylvania have switched their registration to Republican, while 21,022 Republicans became registered Democrats, according to Politifact.

That leans towards supporting the #WalkAway movement… until Politifact pointed out that Democrats going Republican have outnumbered Republicans going Democrat in every year dating back to at least 2013.

Why do Democrats going Republican always outnumber their counterparts? There are probably a host of reasons. But it’s nothing new.

And in an interesting wrinkle, nearly 10,000 more unaffiliated voters have joined the Democratic Party than the Republican Party this year, making 2018 technically a net gain for the Democrats, at least as far as party affiliation is concerned.

Of course, party affiliation doesn’t determine voting patterns, nor does it determine who gets elected.

This year’s midterm elections will be held on Nov. 6.