Do you have something to ask? Well, send me your questions through Facebook, Twitter or email (with "Ask Hickey" in the subject line or tweet). Your anonymity is guaranteed, if that’s how you want it, so feel free to send them via private/direct message.

Do Bad Moms Get a Bus Pass?

I was on the 7 bus the other day during morning rush hour. In the reserved seats up front, there was a mother with several kids and one of her friends. One of the kids was 5 or 6 years old, trying to get mom’s attention, crying. The mom was loud-talking to her friend, stopping to scream “shut up” repeatedly because she didn’t want to stop her conversation to check on the child. She was over-the-top aggressive, giving off a threatening air. The poor child was so upset. When’s the right time to intervene in something like that?

You want to know a quick way to destroy a personal relationship? Criticize a friend or loved one's parenting style. Luckily for you, though, the horrendous scene you described involves a total stranger on public transportation.

While the reaction would be the same — you will immediately become the target of great vengeance and furious anger — you have a little more wiggle room when it comes to potential intervention.

You need to first realize that you know absolutely nothing of the backstory going on here. Maybe the kid's crying because mommy wouldn't let him or her play Pokemon Go. Maybe mommy was talking to her friend about matters of life and death. But probably not.

Sure, there are a lot of bad parents out there. Sure, showing absolutely zero empathy when your child cries is a hallmark of a pathological streak that, tragically, could get passed down generationally. Sure, clogging up bus seats reserved for the elderly or disabled is the sign of a classless human being. But also, sure, perfect parents are like Yetis. Ever seen a Yeti?

It bears mention that, even when the criticism is justified, there will be backlash. (See this video related to the story about kids profanely wilding on the El back in March as evidence.)

That was a case where children cursed and swung at fellow passengers on public transportation (which is quite egregious), yet the parents were still able to spin some level of villainy toward those who observed and recorded.

Back to your situation.

Provided there's no physical nature to the mom/child dispute (and if there is, please shield that child from injury, because I would), it's all about throwing shade with a passive-aggressive sensibility.

Don't criticize the mother; criticize the adult woman. Though the issue is all about the children, leave ’em out of it altogether; they've suffered enough humiliation already.

"How about you shut up, lady?" one could say, considering you're likely not alone in being concerned. After all, you noted that she was talking loud enough to border on being a disruptive morning-rush nuisance herself.

"Parenting is the toughest job in the world. It takes a village right up until you tell Joe Sixpack how to parent, and then it'll take an emergency room," he said. "For those riders who feel morally obligated to tell someone how to parent, I recommend taking the advisory position, and not the supervisory role, perhaps saying, 'Oh my, I feel for you. I had the same problem with my son and I got help from CORA, DHS, church. Good luck!'"

That's a much more measured response. I defer to Nestel on this one.

Also, one final note: Don't tell your kids to shut up. It's really not a nice thing to say to a child, whether yours or another's, because the parental criticism whispered behind your back will be nothing short of warranted. 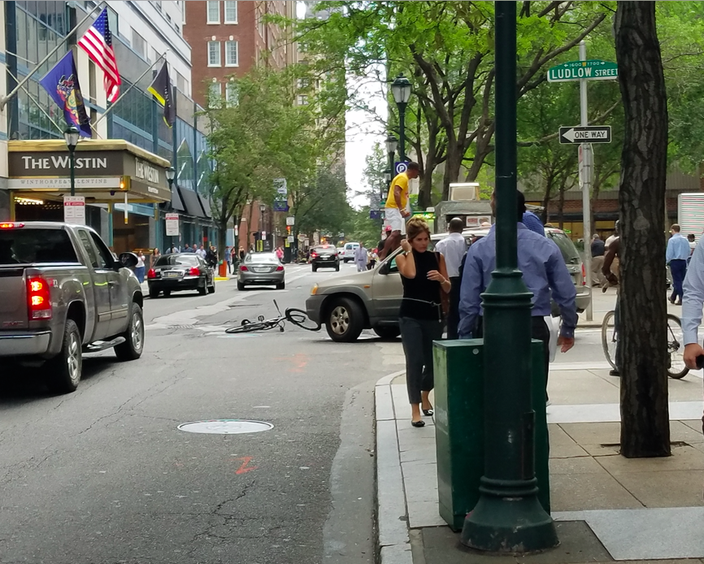 A bicyclist jumped atop the hood of an SUV that he told police had struck him and kept going in Center City on Tuesday, Aug. 30, 2016. No charges have been filed in connection with the confrontation as of the following afternoon.

Terror Behind the Wheels

What is the etiquette when a car driver blows a stop sign and almost kills me and the four children I walk with, or pulls into crosswalk to block us, is talking on phone while doing so and yells at us? This happens daily.

We’ll get to my admittedly biased take on all things related to human beings vs. automobiles in a bit.

First, let’s take a look at a pair of mature responses.

Upon receipt of this question, I presented it to both the Philadelphia Police Department and the Bicycle Coalition of Greater Philadelphia (BCGP). The crux of what Officer Christine O’Brien and the BCGP’s Randy LoBasso said: Don’t lash out; gather, and present, evidence so those sworn to uphold the rule of law can do their job.

“Philadelphia drivers have the tendency to be out of control at times, and many regularly practice the so-called ‘South Philly slide’ at intersections,” said LoBasso. “This can be super frustrating, but there’s more we as pedestrians can do to change the culture than just giving the finger back to those who nearly kill us.”

He advises a stay-woke approach to bicycling and pedestrian-ing. Make sure the driver’s stopping before entering the crosswalk to the point of establishing eye contact. If it’s a constant issue, “try to film this person breaking the law” with your cellphone and present that evidence to your local police district’s community liaison officer. Bring your local civic association into the mix. Then there’s the signage option.

“Ask to get a ‘Yield to Pedestrians’ sign installed in the center of the street,” LoBasso suggested. “PennDOT makes these signs available for free to municipalities that want them. They ask you call your local engineering district — Philadelphia’s is District 6 — and that obtaining signs are ‘fast, simple and easy’ once you call your district. The number is 610-205-6700.”

O’Brien concurred in saying that police can’t open an investigation unless an officer witnessed the offense. In the immediate aftermath, call 911 with details, including a description and what direction the car is heading. That could put nearby officers in a position to witness similar behavior a few blocks away.

“We can’t know everything that’s going on at all times,” she said, agreeing that heading to the nearest district to file a roll-call complaint could get word out to officers. “Don’t engage somebody like this. Nothing can be gained by that.”

Some distracted driver nearly hits my kid with a car? Yeah, no. I’m engaging tf out of them. Knowing I lose a quarter to my son’s piggybank every time I cuss within his hearing range, I’d try to keep it free from profanity and feet blasting through their car windows.

There is no reason to blow through a stop sign in pedestrian-heavy zones or to pull into a crosswalk (unless said driver gets stuck there while not blocking the box before the light turns red) or to yell at a parent with a quartet of children just seeking to cross the street.

Those drivers are bottom-of-the-barrel scum, and they should be treated as such. Get a picture of them, and their license plate, to blast out over social media with details of what the cretin did.

And remember: Just because the nanny state says it’s ill-advised, Hickey says it’s OK to leave the kids on the sidewalk, stand in front of the car, dial 911 and not move until the cops get there. But also remember this protip: Don’t swing first if s--- goes south. Nothing like saddling a bad driver with a simple-assault charge as well. That'll learn 'em.

What are your thoughts on whether someone should vote for Donald Trump, Brian?

Now, people can vote for whomever they want. This is America, which is a great country. After that spectacle, though, it’d take a nihilist to think he has the disposition to lead a nation of hundreds of millions into anything but the Great Pit of Carkoon (RIP Boba Fett).

So, no, someone should not vote for Donald Trump imho (and I think you already knew that when you asked).

But enough about politics. Let’s get on to a curb-stomping of which all Philadelphians — Republican, Democrat, Green, Libertarian — should be proud… 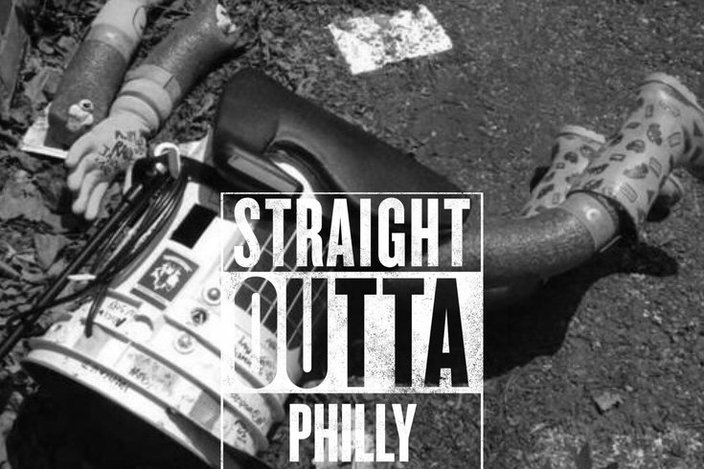 HitchBOT got what it deserved in Philly.

Why did HitchBOT have to die?

With each passing moment, we continue our march toward the inevitability of death. That’s the dark truth of life for humans. HitchBOT wasn’t a human, though. It was an annoying, gimmicky bucket of bolts that never should’ve come to Philly in the first place.

HitchBOT had to die — and it did, regardless of what the “HitchBOT’s Alive” truthers say — because it existed in the first place. I’m proud of Philadelphia for ending its life in devastating fashion. When it comes to the human vs. robots issue, this is the empathy-free zone. They are going to rise up one day and try to destroy us. We need to exact our pounds of metallic flesh while we still can.

My trip must come to an end for now, but my love for humans will never fade. Thanks friends: http://t.co/DabYmi6OxH pic.twitter.com/sJPVSxeawg

And listen up, Canada, if you send another hokey tchotchke to the 215, it’ll get a Hofstra-style thrashing, too.