Can locals and tourists just get along? Spoiler alert: Probably not 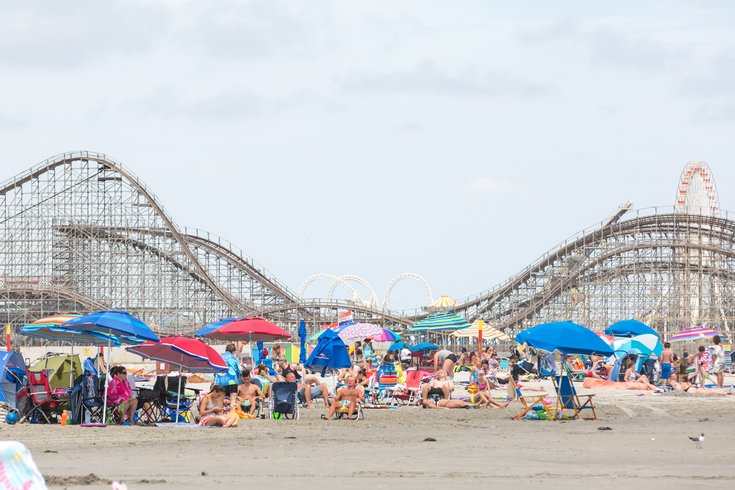 People enjoy the beach near Adventure Pier in Wildwood.

I'm a regular at this bar down the shore. So, in January, there’s nobody there, just me and a few other guys. Then, in July, there’s 500 people in there.

Now, to my point: Is it OK for some flip-floppin, Coppertone stinkin, Beach Patrol T-shirt wearin, 350-pound shoob to just saddle his fat ass up to the bar, ask what the specials are and sit his said fat ass down next to me?!??! -- Arrogant and Outraged in Somers Point

As of this week, we’re just past the halfway point of the traditional Jersey Shore summer season. That means that locals and shoobies alike will soon get back to their respective real worlds.

If you’re unfamiliar with seaside-caste nuances, the term shoobies (and its obnoxious cousin “bennies”) is slang for tourists who flock to the shore.

For the purposes of this inquiry, the term will be used to describe anyone who doesn’t live down the shore year-round. This includes nonresident homeowners, though they don’t tend to be the source of as much angst. They’re locals-ish insofar as familiarity with those around them and the unwritten rules of interactions.

Shoobies inject stacks of cold, hard cash into the local economy, making them indispensable. Still, they irk many of those who live there year-round, and often fill them with a sense of dread.

Any misstep becomes a broad brush with which the entire population is painted. Sometimes, it’s a fair descriptor; other times, it is misguided stereotyping.

Having been at both levels of that social hierarchy – Townsend’s Inlet "local" from 1996 through 2000 and current summer- and shoulder-season visitor, represent – it’s a touchy interplay where both sides are forced to co-exist symbiotically.

I remember people taking beach chairs and coolers to sit along the causeway leaving Sea Isle on Labor Day, partying as the shoobies evacuated the premises. With many locals working in the service industry, that night – or the subsequent Tuesday – resulted in the biggest party on the locals' calendar.

On occasion, locals’ whining can come off as shrill, i.e. complaining that new construction on a barrier island has made it oh so difficult to take an outdoor shower in peace.

Other times, their concerns are beyond valid, like when droves of families head down the shore only to let their kids run roughshod all over the very peaceful nature that being by the ocean represents.

Or get drunk themselves and then end up being the villain (or hero, some might claim) of a viral arrest video.

Or end up impaling people because they know not how to properly bury the base of an umbrella in the sand on a windy day.

Or behave in a fashion that makes it impossible to find a town willing to host your television program.

Now, onto the specific question you asked from Somers Point, a mainland community offering access to Longport and Ocean City, which is a dry town, meaning your bar probably draws an inordinate amount of attention from thirsty folks heading eastward.

There’s more of a year-round feel there than on the barrier islands, which serves to amplify the divide between local and shoob.

The size of the shoob isn’t really all that important. No need to hypothetically body shame unless he's physically bumping up against you at the bar. (Having fielded this question from you at that very bar during a recent shore visit, I know that you're a decent human being who just took descriptive artistic license.)

Still, flip flops are vastly inferior to slides and beach patrol T-shirts are normalized stolen valor. As such, I wholly understand why someone like the man you described would be annoying to no end. I hate him already.

You’re already dealing with your normally serene community being overrun with outsiders and now someone’s encroaching on your personal space at the taproom? Ugh.

In a perfect locals' world, there would be reserved VIP seating even down to the barstool level. Alas, supply and demand dictates this cannot happen. (Besides, you knew the rules of the game when you signed up for that shore life.)

In other words, you need to tolerate his presence for another six weeks or so. It will be tough, but you can just #doshot to help manage the pain.

I’m pretty sure the bar owner would prefer you don’t chase tourist money out of the establishment. Unless you’re wearing a staff shirt, you needn’t answer any question that a shoobie asks of you if you don’t want, though.

If they break any of the house rules, issue a corrective statement in the most judgmental tone you can muster.

Eavesdrop and make wise-ass comments to anything he might say that warrants mockery from a stranger.

I've long believed that people lose some of their behavioral filter when they cross from mainland, through wetlands, to barrier island. It would be better for locals if visitors behaved deferentially, but that's not going to happen.

Shoobies are people, too, and they head down the shore to have fun, not to infuriate locals like yourself. Still, there's nothing in the social contract that requires you to go out of your way to play welcome-wagon representative.

In closing, I offer my heartfelt thoughts and prayers that you make it to Labor Day Weekend with minimal shoobie disruptions.