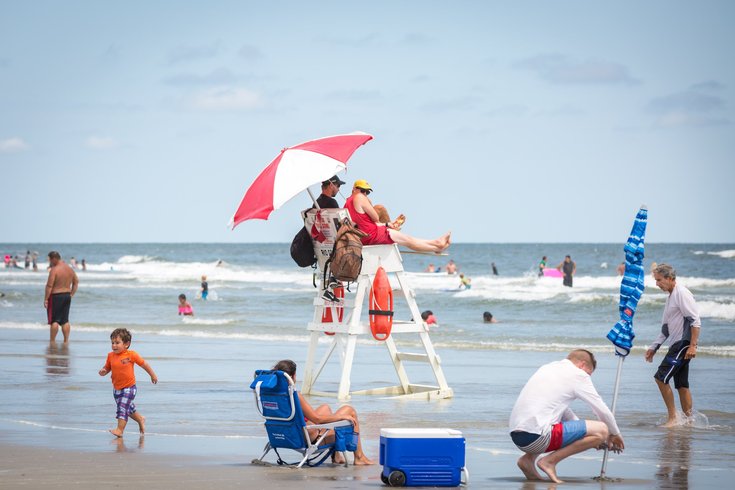 Lifeguards sit under a beach umbrella at the Jersey Shore.

A 67-year-old-woman was struck by a beach umbrella carried by a gust of wind that put her in the hospital for a few hours during her Jersey Shore vacation this week.

The woman was hit with the umbrella flying with so much force that the aluminum end of the umbrella went right through her ankle and out the other side, the Asbury Park Press reported.

It all happened around 4:30 p.m. on Monday during what the woman — identified by NJ.com as Margaret Reynolds from London, England — and other beachgoers described as a "beautiful day" when a gust of wind that must have had some other-worldly power sent the seemingly harmless beach accessory into the air and right into the woman's leg.

According to NJ.com, about five inches of remaining metal framework were sticking out of her ankle.

Reynolds was treated by emergency responders immediately, bystanders said, and freed from the umbrella with a pair of cable cutters. She was later taken to the Jersey Shore University Medical Center in Neptune.

Reynolds remains in good condition, as per a hospital spokesperson.

Wild wind-blown umbrellas have been known to kill in the past, so take precautions. The beachBUB is a base that comes highly recommended from avid beach umbrella users that will prevent anything going flying.

Also, make sure you wet the sand before you try to screw in one of those anchors. Here are some other tips.