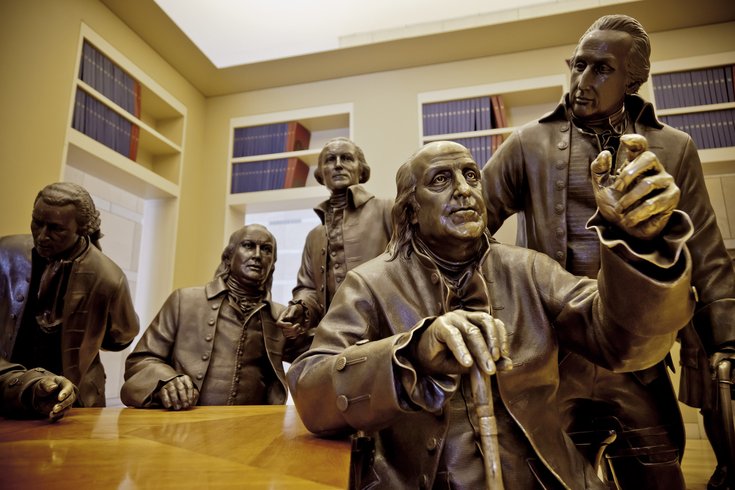 Say, guys, what do you think Brian Hickey will think of the Bill of Rights in a couple hundred years?

You have a lot to say about politics, so rank the Constitutional amendments. – B.G., in person

Yes, I do have a lot to say about politics, but not enough to rank all 27 amendments. Besides, it gets really tricky – in the land of Amendments 11 through 27 – trying to reduce the abolition of slavery, poll-tax elimination and expanded voting rights to mere listicle entries. (That said, the 16th and 18th Amendments are punks.)

OK, now onto the Bill of Rights, ranked from worst to best:

10. Second Amendment. Oh, you really thought Obama was coming for yer guns? Did he ever show up? Wait, are you telling me that Obama did not show up to take yer guns? Jeez. That’s kinda silly then, Big Lobby pawn. Grow up. Think for yourself. Keep your toddlers away from them so they don’t kill or get killed. Be the responsible gun owner you want everybody to believe you are. Lose the paranoid delusions. Nobody's going to take your guns away unless you prove yourself unworthy of having one.

9. Ninth Amendment. Other rights kept by the people? What does that even mean? I mean, besides being the equivalent of a cop-out “et cetera” addendum to the Constitution. Get specific or go home. You’re lucky you didn’t hold down the 10th spot, to be quite honest.

8. Tenth Amendment. No, this Bill of Rights coda doesn’t necessarily protect state’s rights. It only says they have some wiggle room when it comes to powers not given to the feds or prohibited to the states. It’s the type of thing that led to slavery, per my non-constitutional-law-trained mind.

7. Seventh Amendment. Civil trials are a necessary evil. Wish there were less of them, what with their installation of America as an over-litigious society. Also, there are too many lawyers. Sorry, not sorry. Most of you are decent people. Most, not all.

6. Third Amendment. God bless the troops. That’s not to say I’d want a bunch of them squatting at my house without my permission. That would be annoying. This amendment just feels unnecessary in an era in which we could totally crowd-fund hotel and motel rooms for the troops instead.

3. (tied) Fourth, Sixth and Eighth Amendments. Having life, liberty and property would be substantially less important to you if we lived in a nation where you weren’t (supposed to be) protected from unreasonable searches/seizures, have rights when you stand accused of wrongdoing and not (supposed to be) subjected to excessive bails, fines and punishments. This trio of amendments serve as the basis for what the American criminal-justice system is supposed to be. Perhaps one day we’ll truly live up to their expectations.

1. First Amendment. If you started reading this response without knowing this is how it’d end, you don’t know me very well at all, do you? In a country where the First Amendment is under attack, public discourse more important than ever. This goes along the entire ideological spectrum (from speech and press to religion, assembly and petition). On the former two, when people say "I hate the media," I hear them saying “I hate knowing that the media provides the stories that its audience craves because I think the audience should crave different stories.” Without free speech, America doesn’t exist. Well, I like America. I want it to exist. That’s why I’ll fight for anyone’s right to be heard, even if I loathe what it is they’re saying. Even you, yes you, the dolt twitching because you haven't finished your NRA-talking-points comment about the Second Amendment yet.

Children’s questions, more difficult than they should be

What is the difference between a hotel and a motel? (L.H. in person)

When my son asked me that question above, I made something up on the fly. Then, I looked it up. (It was close).

Here is the answer, per a USA Today travel story:

"Hotel," according to Merriam-Webster, originated in the year 1765 and comes from a French word for an establishment that provides lodging, meals and other services.

"Motel" came along much later, in 1925, according to Merriam-Webster. It blends the words "motor" and "hotel" and is meant to describe an establishment that provides some, but not necessarily all of the services associated with a hotel.

Motels, according to San Jose State University communications professor Andrew Wood, are an entirely American phenomenon: They originated as inns along the country's first major motorways, offering rest to weary explorers and families on vacation.

Here are some videos that delve into the question, as well:

Now, you won't be caught off guard if your kids ask you that same question.

What do you want to talk about on my new blodcast? (Tod, via Twitter)

Whether your use of “blodcast” was a) a typo or b) an indication that you plan to creatively ripoff the apparently erstwhile podcast of “two Hetero-lifemates @GreyBixler & @Z4CH3RY telling the world about their worlds:"

That's what I want to talk about, Tod.

What do you want to talk about?

This is an example of the type of question I'd love to see submitted for #askhickey. pic.twitter.com/4GVQ1AEF3C