Ask Hickey: Would you rather be a whale or transcribe Trump's thoughts?

What neighborhood's best for us?

I have read a number of your articles about neighborhoods/areas around Philadelphia and would like to ask for some information.

My wife and I are preparing to retire, young-minded, early 60s but very urban-oriented after living in a number of cities – NY, Hoboken NJ, Richmond VA and several in Europe.

We are looking for an urban feel, but do not need to be in Center City and have started doing research on Manayunk. I am wondering, given what I have read, if we will fit or if you know of other areas which might be good fits. (Ron B., via email)

Judging from your brief description, Ron, I’m thinking Old City, Washington Square, Fairmount/Art Museum area or Society Hill might be good fits for you. Not in Center City itself, but close enough to have an urban vibe that feels a bit European (walkability, outdoors offerings for recreation and dining/drinking, etc.)

I live in East Falls, the neighborhood over from Manayunk. Our neighbors have a distinct Main Street area, yes, but it is often over-run with white-capped bros. (It’s where I sometimes went to party in my younger days).

I’ll always sing the praises of the neighborhoods in which I lived, though, so East Falls and Fairmount fit that bill. (Except for that whole dual-Halloween thing Fairmount's got going on, but that's a discussion for another time.)

Parking is a mess in Fairmount (unless you have a driveway), but it’s right by the Ben Franklin Parkway, home of the Philadelphia Art, Rodin and Barnes museums, and those sound like places you might be interested in seeing. In fact, an old-head empty nester I know recently made that move from the burbs, and he and his bride seem to dig the Fairmount life.

Also, readers, if you have suggestions for this soon-to-be-Philadelphian couple, send them along in the comments section or email them to me and I'll pass them along. 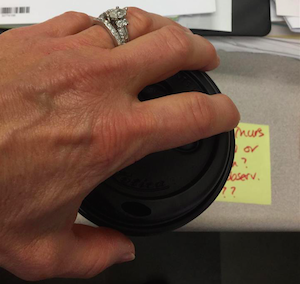 Is it ever OK for a Wawa store clerk to touch a customer's coffee like this when ringing it up? Why is she touching my coffee at all much less the lid?!? (I got a new lid lol) – JD, via Facebook

When you think about getting coffee at Wawa or another convenience store, one of the underlying realities is the fact that a customer who was there just before you may have touched the next lid in the stack.

When I touch an extra lid, I throw it away. That's just common (albeit wasteful) courtesy. But that's neither here nor there, for you asked another question, so here's another answer:

But for context, Sheetz cashiers lick your lids, so Wawa’s still better. LOL.

Would you rather work for PEOTUS or be a creature of the sea?

The world is a weird place.

Donald Trump comes to you with his child-sized hands on some kind of Men in Black-style remote and says you have an option: You're not allowed to watch any more soccer, either in person or on television unless you pick one of the following two options, and if you decline both, soccer is forever off the table for you; you know it exists but you can't see it anymore.

You can either spend the rest of our glorious Cheeto-covered leader's life transcribing every one of his thoughts in 140-character bursts, or you can spend the rest of your life as a whale, albeit one who can enjoy soccer (and the Cubs, and have access to your social media accounts).

What kind of whale do you choose to be so as to ensure continued marvel at the Divine Gift to Man that is Lionel Messi? (Sean P., via email)

Provided I still can stay in touch with my family (and if I can’t, I’m thought-transcribing), that’s easy.