At CHOP, helping to see a better way to diagnose concussions

After FDA balks, a clinical trial for brain injuries leads to eye tracking and EyeBOX. 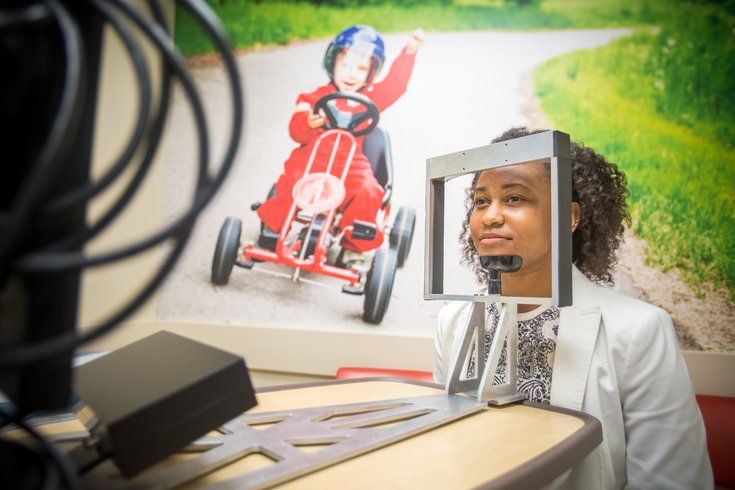 Cecilia Poole, a research assistant at the Children's Hospital of Philadelphia, watches a short video on a screen as she demonstrates the use of EyeBOX, a device that tracks and records eye movement. The technology is being developed as a way to diagnose concussions and traumatic brain injury in patients.

Brilliant discoveries are sometimes spawned through sheer serendipity. If it wasn’t for a messy lab bench and the mold that contaminated a Petri dish when Dr. Alexander Fleming arrived back from a vacation in 1928, he would have never discovered Penicillium notatum — or what we now call penicillin.

Without the rigid guidelines laid out by the Food and Drug Administration in May 2011, Dr. Uzma Samadani, M.D., Ph.D., a former neurosurgical resident at the University of Pennsylvania, might have never developed the EyeBOX CNS, a novel neuro-optic tracking device that accurately detects cranial nerve function resulting from concussions and traumatic brain injuries via non-invasive measurement of the effects of elevated intracranial pressure.

Samadani, associate professor of neurosurgery at the University of Minnesota and co-founder of Oculogica Inc., which developed EyeBOX, is receiving help locally from a Penn connection, through Dr. Christina L. Master, M.D., a pediatric sports medicine specialist at the Children's Hospital of Philadelphia.

“We’re trying to get FDA clearance and we’re planning on submitting soon,” Samadani said. “We’re essentially a software service company, with the aim to provide a service to hospitals looking to evaluate concussion patients or suspected concussion patients. First, we have to achieve FDA clearance, that’s the first mountain, then, we have a business model behind that. We’ll see where it goes. We’re very close. We have to get everything in a row.

“Our goal is to become the gold standard for detection of optical motility dysfunction associated with traumatic brain injuries," she added. "As of right now, there are different ways to assess brain function. We feel this is one of them that will be very valuable.”

And to think it may not have happened at all. 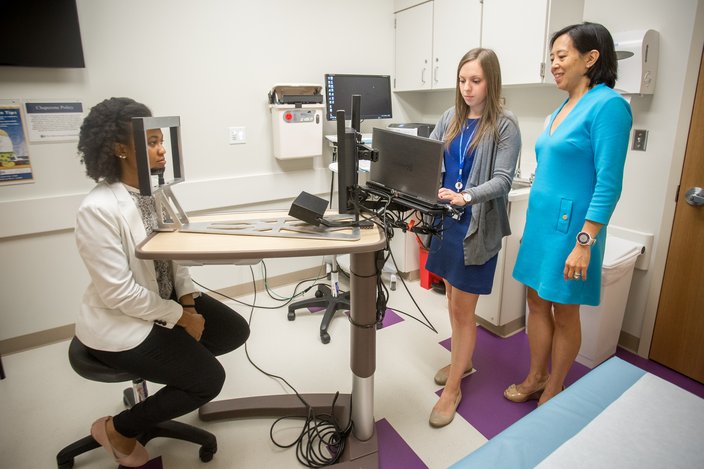 Dr. Christina Master, right, a pediatric primary care sports medicine specialist at the Children's Hospital of Philadelphia, oversees a demonstration of EyeBOX with research coordinator Olivia Podolak, center, and research assistant Cecilia Poole. “This is a tool that has the potential to be portable...” says Master, of the concussion diagnosis device. “It has the potential to be on a sideline, or a locker room, or ringside.”

In 2010, Samadani received a research grant to run a clinical trial for brain injuries. As part of the grant, she needed to find an outcome measure for a traumatic brain injury trial. She initially investigated the use of a functional MRI scanner, a neuroimaging procedure that measures brain activity by detecting changes associated with blood flow. But the FDA balked, saying it did not want to put brain-injured patients into the scanners out of concern for their safety.

“This came about because we spent basically a year and a half wrestling with the FDA whether or not we could use the FMRI as an outcome measure for traumatic brain injury trial,” Samadani said. “Ultimately the FDA was worried the patients were brain-injured and they wouldn’t be able to relate if they were in distress. They said we needed to come up with an alternative way to assess how the patients were doing other than putting them in an MRI scanner, and the alternative way was eye tracking.

Around for more than 30 years, eye tracking is well-established way to assess neuropsychology, with heavy empirical research data behind it. For example, doctors have used it to assess patterns of eye movement in those with autism or schizophrenia. There is extensive psychiatric research in eye tracking. All of those studies, however, utilize spatial calibration, when a patient is asked to look at one particular location, say up, or down, or right, or left.

"I don’t care what a patient is looking at; what I care about is whether or not they’re capable of moving their eyes. That’s the information we are getting from eye tracking.” – Dr. Uzma Samadani, Oculogica Inc. co-founder

During that type of calibration, when a patient is asked to look up, the amount of light that reflects off their cornea is measured and used to assess subsequent eye positions. But it presents problems with assessing TBI patients.

“What happens is, suppose they’re brain-injured and you may tell them to look up, but their eyes only go halfway up, they calibrate that as up, and the computer assumes that amount of movement is normal,” Samadani said. “The assumption with spatial calibration is that the patient has a normal ability to move their eyes."

Out of concern that their brain-injured patients would be unable to follow instructions to allow spatial calibration, Samadani said her team had to develop a different method of eye tracking. Instead, the team developed software to record and analyze the position coordinates of the patient's pupils over time.

"That was the big difference," she said. "If you do not spatially calibrate, you get information about the raw pupil position that can tell us how well their pupils are capable of moving. I don’t care what a patient is looking at; what I care about is whether or not they’re capable of moving their eyes. That’s the information we are getting from eye tracking.”

In the case of the EyeBox, patients watch a video for less than four minutes. 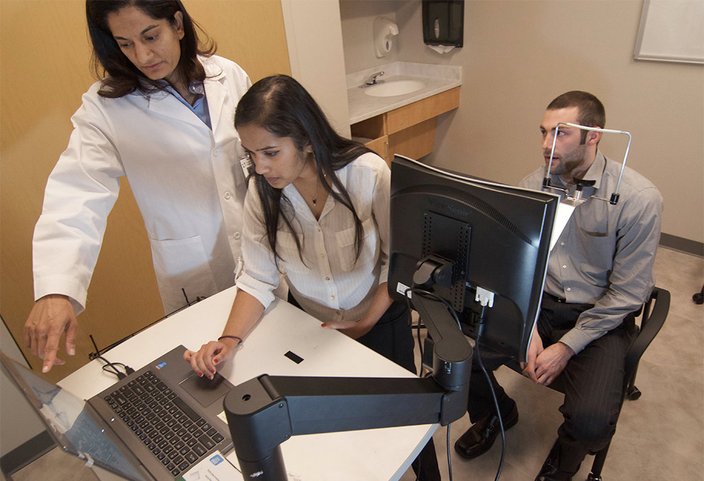 Out of concern that brain-injured patients would be unable to follow instructions to allow spatial calibration, a different method of eye tracking had to be developed by the research team headed by Dr. Uzma Samadan, left, associate professor of neurosurgery at the University of Minnesota and former neurology resident at Penn. Here she works with researchers Vikalpa Dammavalam, center, and Sam Daly.

So it seems the eyes may not be the windows of the soul, but to the brain. Master certainly experienced an eye-opening revelation when she sat in on a lecture Samadani was giving at Penn in 2013. She, too, was working with concussions and brain-injured patients, but her patients were children and young adults.

“In our clinical practice we saw a lot of visual eye tracking problems in our kids,” explained Master, who’s been at CHOP for 25 years. “When we get their histories and symptoms after a concussion, you can imagine school and the daily life of kids are heavily visually oriented these days. You need to use your eyes for everything that you do, and if there are any problems with eye tracking after a concussion, that permeates every facet of a child’s life, especially school.

“Dr. Samadani’s algorithm can assess how together the eyes are working, and how not together they’re working after concussions....It does seem to be a promising measure." – Dr. Christina Master, CHOP sports medicine specialist and researcher

“They do so much reading, tracking on smart boards, tablets, computers, so when a concussion disrupts that visual function, it becomes really prominent. We were interested already before we met Dr. Samadani in how technology could help us identify these deficits in a more precise manner to objectively eye track these deficits that we saw clinically. What we found in clinical examination in people after concussions is that their two eyes don’t work well together; they’re not working as closely together as before the injury.”

With EyeBOX, the program is temporally calibrated, capturing the eyes separately, looking for conjugate gaze, or when both eyes work together.

“Dr. Samadani’s algorithm can assess how together the eyes are working, and how not together they’re working after concussions," Master said. "We have been collecting data and studying kids here at CHOP. We have a manuscript that’s being currently reviewed for publication. It does seem to be a promising measure. 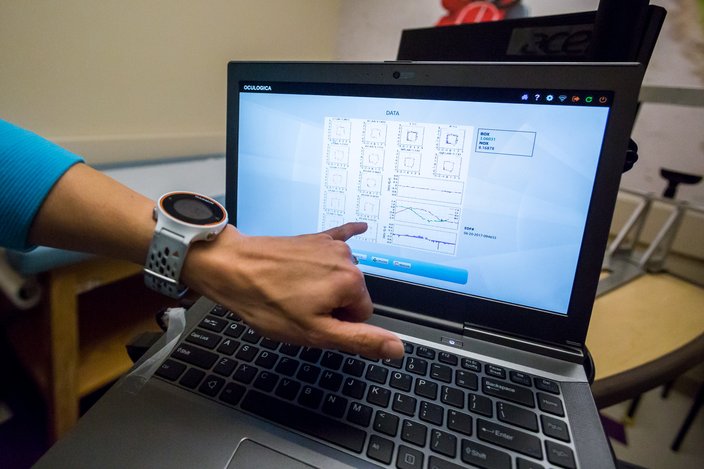 Dr. Christina Master indicates patterns recorded by EyeBOX as it tracks eye movement. Here, case research assistant Cecilia Poole watches a short video that moves in a pattern around a screen to demonstrate the technology at CHOP.

“We can work with children as young as four for the eye tracking; the trick is having a Disney video on the screen that they can watch. We’re excited about this as a tool. Concussions are still a complicated diagnosis. This is a tool that has the potential to be portable, but right now, there is a cart-based version. It has the potential to be on a sideline, or a locker room, or ringside.

“What we like about this is that it’s truly an objective measure. You can’t be a football player saying he tanked his eye-tracking test, because you can’t," she said. "So the player can’t be cleared because he tanked his Baseline test to play. The whole industry of measuring physiologic functions is exploding right now. This fits into that explosion of technology. I can see it in an NFL training room someday.”

Master travels the country giving lectures. She related a specific passage that she likes to open with involving two definitions of concussion: one from Berlin Consensus Statement on Concussions, released this year, that says: “Sport-related concussion is a traumatic brain injury induced by biomechanical forces;” and the other from the “Annals of Surgery,” dated 1896, which states: “Symptoms of concussion are produced by the transmission of the blow to the brain in the form of oscillations which disturb the relations of the molecules of the brain.”

“We have come a long way with concussions, even in the last 10 years,” Master admitted. “But when you look at the definition of concussions, the one we use now is not that different from the one they used over 100 years ago. From that standpoint, we still have a long way to go. The problem is, concussions are a mild injury and still hard to pick up. We’re the generation that hopefully can crack that puzzle with our technology.”