At East Falls polls: Children, tiny dogs and smiling women – and a long line to vote 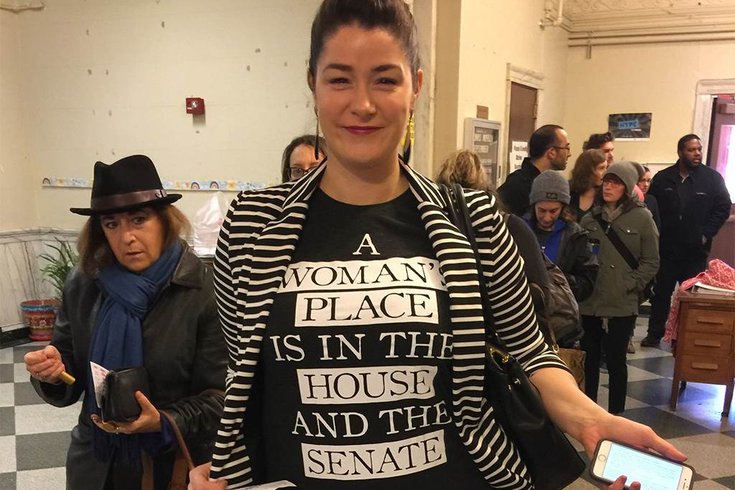 Mary Alice Duff didn't try to mask her voting intentions when she went to the polls at Thomas Mifflin School in East Falls on November 8, 2016.

The polls wouldn’t open until 7 a.m., but Ginger, Marlene and a friend showed up at East Falls’ Thomas Mifflin School a half hour early to beat the lines.

“We always get here early, but not until 7,” said Ginger. “I don’t think we’ve ever seen anything quite like this, the historical importance (of this election).”

“This” was a line about 75 voters deep when Election Day officially started.

“We were worried about the long lines,” said Marlene. “It’s also about what’s at stake in this election, and what will still be at stake once Hillary (Clinton) is in office.”

The “what’s at stake” she mentioned tied closely into their friend’s account of her niece – a kindergartener – hearing a classmate in Delaware County say “Hillary Clinton is a murderer.”

They were correct to anticipate those long lines.

All across Philadelphia, reports are pouring in of early turnout. Here in East Falls – where the line spilled outside of the Falls of Schuylkill Library branch and around the corner – election officials reported 134 out of 800 people had voted in one division by 8:30 a.m.

“I’ll explain on the way to school that sometimes, grown-ups cry when they’re happy.” – Mary, after voting in East Falls

There were parents with elementary school-aged children and babies. There were women of all ages beaming with pride, including Mary Alice Duff, who sported a T-shirt reading “A Woman’s Place is in the House and the Senate.”

“This is great,” said Ginger after being the first person to vote in Ward 38. “I got the chills, literally.”

Walking by the polling place and peering in to see the long lines, Deirdre Mullen considered coming back later. She entrusted the care of her two tiny dogs, Henley and Izzy, to me for 20 minutes so she could do so around 8:15 a.m.

“People,” she said of the scene inside, “are hopeful.”

Mary, a mother walking out of the polls with her two sons, noted that she had one important thing to do after voting.

“I’ll explain on the way to school that sometimes, grownups cry when they’re happy,” she said.