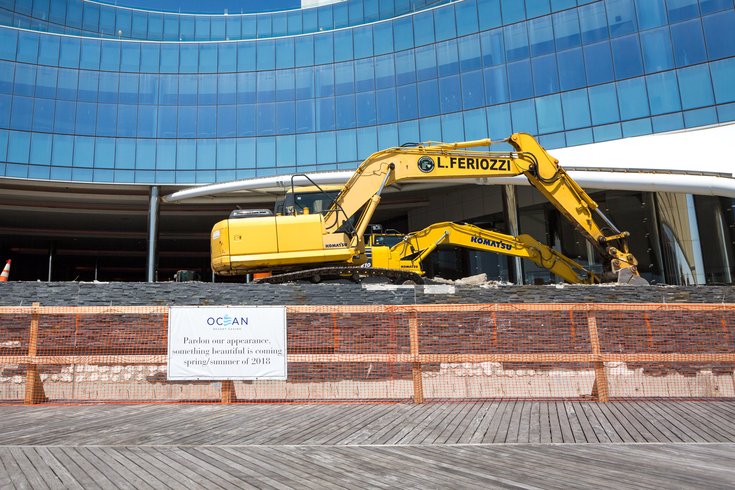 Construction continues on the Ocean Resort Casino in May. It is located at the site of the former Revel on the north end of the boardwalk in Atlantic City. Ocean Resort is one of two casinos – along with the Hard Rock Hotel and Casino – opening in Atlantic City on June 28.

Ocean Resort Casino, which will officially join the Atlantic City boardwalk in the old Revel Casino building when it opens June 28, is already preparing to offer sports gambling with a high-profile partnership.

Just as the Borgata announced earlier this month that it plans to offer sports gambling as soon as state regulators make it legal in New Jersey, Ocean Resort Casino is similarly minded. Pending legislation, the operators of the new casino say it also will offer sports betting on its opening date.

Ocean Resort announced it partnered with sports book operator William Hill, the largest legal sports book operator in Nevada, to oversee a 7,500-sq. ft. betting facility on the gambling floor of the casino. The area will include a center bar surrounded by a video wall for viewing both sports events and live InPlay betting odds.

Ocean Resort is one of two new casinos opening in Atlantic City, built in the shells of formerly thriving businesses – the other is the Hard Rock Hotel & Casino at the old Trump Taj Mahal property. Hard Rock is also scheduled to open Thursday, June 28.

The casinos' plans come just a couple weeks after the U.S. Supreme Court ruled that the Professional and Amateur Sports Protection Act, which significantly restricted sports betting, was unconstitutional. As state lawmakers are preparing to regulate sports betting, New Jersey is expected to pass legislation in June.

Elizabeth Muoio, the state treasurer from New Jersey, recently estimated that legal sports betting would bring $13 million in tax revenue to the state in the fiscal year beginning July 1, though other estimations have suggested revenues will be considerably higher.

In addition to tax revenue, officials look forward to the number of jobs the new law could create in New Jersey, which has been estimated at around 3,500.

As the Borgata and Ocean Resort announce plans for sports gambling, other Atlantic City casinos will likely follow suit.