All the info you need about beaches, weather, events and more for New Jersey's seaside gambling resort 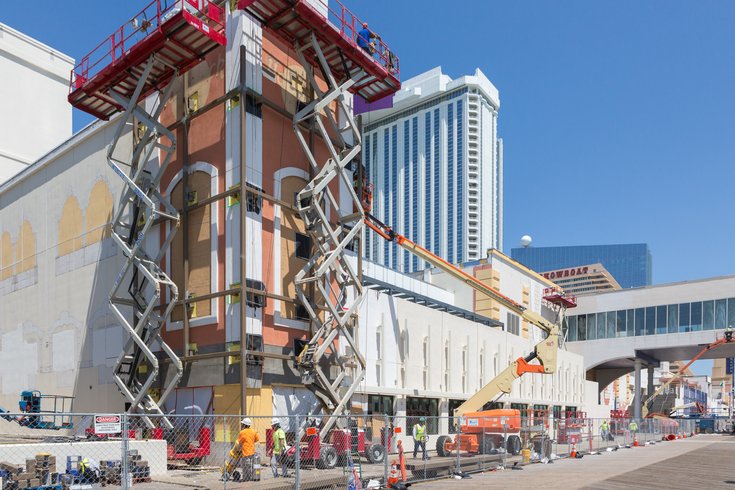 Construction crews work on the new facade of the Hard Rock Hotel Casino in Atlantic City, New Jersey, which opens June 28 on the site of the former Trump Taj Mahal.

It doesn't take an expert on the Jersey Shore to know that Atlantic City is for the beach goers looking to relax during the day, maybe grab a bite to eat, and then at night head to the casinos, drink at a sand bar or see Britney Spears in her latest show.

Atlantic City boasts some of the best accommodations, nightlife and concerts in this area — especially when it comes to other Jersey Shore towns.

<<<TO THE NORTH: Brigantine

Ventnor: TO THE SOUTH>>>

But it's not for everyone. It's not quaint like Cape May, or as quiet as Brigantine.

Your experiences in Atlantic City can vary, depending on what you're looking for. This guide will help you decide where to stay, which beaches to visit and what to do.

Below is the latest weather forecast for Atlantic City, New Jersey, and here is the current surf report.

No beach tags here. All Atlantic City’s beaches are free.

Lifeguards are on duty from 10 a.m. to 6 p.m. at 50 locations on Atlantic City beaches. There are also 11 stations that provide first aid, EMTs and are places where you can call for help. They're located on Caspian, New Hampshire, States, South Carolina, Kentucky, Michigan, Texas, Chelsea, Albany and Bartram avenues.

You can surf, fish, swim, kayak and windsurf on Atlantic City beaches, but you need to go certain beaches for each activity.

Surfers: Head to the Downtown Beach, Crystal beach or Delaware Avenue Beach. You can even take surfing lessons and rent gear there.

Kayakers and windsurfers: You can only do these activities on Jackson Avenue Beach.

Fishing: Try the jetties on Maine Avenue or the inlet off the boardwalk during non-bathing hours (before 10 a.m.; or after 6 p.m.).

Swimming: Swim only when a lifeguard is present from 10 a.m. to 6 p.m.

Here's a map of where handicap-access ramps onto the beaches are available.

While you’re disputing Yanny or Laurel, we’ll be admiring the beauty of a days rain (📸: @informl) #doac #atlanticcity #visitac #yannyorlaurel

If you come to Atlantic City, you'll most likely be staying in a hotel, resort or casino hotel. Parking will vary based on where you stay.

To get you started on where to look, here's a list of all the accommodations in the area.

Atlantic City is probably the most event-heavy of all the shore towns — for obvious reasons.

At any given time, the casinos will host musical performances, theater shows, concerts and all kinds of cool events. That's kind of their thing.

The centerpiece event each summer is the Atlantic City BeachFest Concert Series. So far shows by Sam Hunt, The Chainsmokers and, most recently, Demi Lovato have been announced. Ticket information, the summer concert series schedule and more can be found at acbeachconcerts.com.

At the Borgata this summer, Barry Manilow, Britney Spears and Cher will all be putting on performances for a few days at a time. What more could you want in life than Barry, Britney and Cher all in one place?

There are always themed nights at casino clubs and bars, comedy clubs with a rotating calendar of comedians slated for the summer months, burlesque shows and more.

Here is a list of relevant links that you might need while you visit Atlantic City — the library, transportation authority, historic Absecon Lighthouse and the aquarium.