B & B reopens in home of Atlantic City's founder

The Jonathan Pitney House in Absecon is back in business, run by a hospitality family 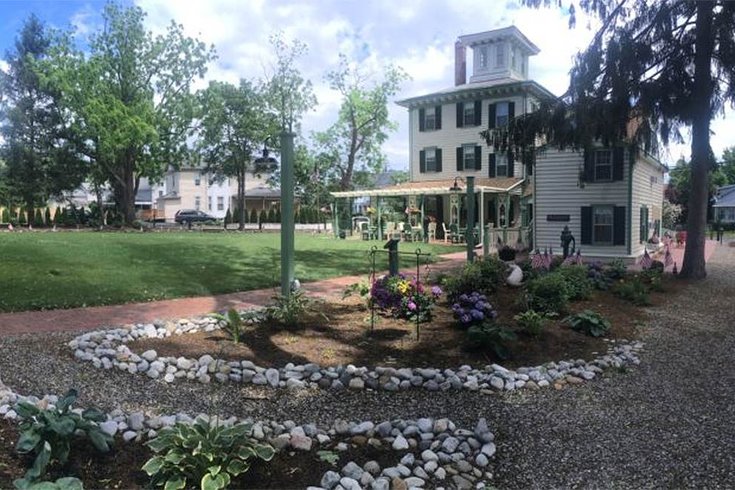 The Jonathan Pitney House at 57 N. Shore Road in Absecon reopened as a bed-and-breakfast in July.

When Columbia College medical school graduate Dr. Jonathan Pitney relocated to Absecon in 1820 to open a practice, he rented a room in Samuel Read’s home on Shore Road and eventually purchased the property for his home.

Pitney established a successful practice, but his claim to fame was the role he played in the founding of Atlantic City six miles away. He cajoled investors from Philadelphia to fund a railroad from Camden to the shore, the impetus to create a resort on mosquito-infested, barely populated Absecon Island in 1854.

More than 125 years after his passing in 1869, Pitney’s house became a bed-and-breakfast while the city the good doctor helped birth basked in the glow of the casino era. But like Atlantic City itself, the inn fell on hard times and folded a decade later. In July, the Dr. Jonathan Pitney House came back to life as a B & B.

In 1848, Pitney added a three-story enlargement to the 1799 original house. The property remained in family hands until a 1946 sale, according to the 1998 application for inclusion on the National Register of Historic Places. Vonnie Clark and Don Kelly bought the property in 1995 for $150,000, Clark said.

After major renovations, Clark and Kelly opened a six-bedroom B & B a year later that thrived enough to add a second, four-bedroom building.

“I had a dream to own a B & B since high school,” said Clark, a longtime official with the Greater Atlantic City Concierge Association who also works in risk management for Trump Entertainment. “When we started, it was the beginning of the internet and we had guests from all over the world.”

Just prior to the 2008 economic crash and expansion of gaming in Pennsylvania – triggers which led to the stunning downturn of Atlantic City – the Pitney House ended its days in hospitality.

“It went downhill in 2004 and I left in 2005,” Clark said. “I had nothing to do with the later sale but I understand it went for less then what we paid for it.”

According to Richard Perniciaro, executive vice president of planning, research and facilities at Atlantic Cape Community College, the innkeepers had a difficult time making a go of the property even when the casinos still performed well.

“I will say that the connection to the founder of Atlantic City was not played up in the past, not in ads as far as I remember,” he said.

'NOT CONCERNED WITH ATLANTIC CITY'

Fast forward to last year. Ed and Wendie Fitzgerald and their daughter, Tracy Walsh, bought the building with no worries about Atlantic City.

The Fitzgerald clan comes with a hospitality pedigree. The family founded and owns the Village Green, the collection of eclectic shops adjacent to the Historic Towne of Smithville north on Highway 9. Part of the development includes the 28-room Colonial Inn bed & breakfast

“We have our own customers, and they’re not Atlantic City people. We sell out during weekends,” Ed Fitzgerald said.

The Pitney House expects to partner with nearby inns to house guests for weddings and other events, Walsh said.

“We’ll also be an overflow for the Colonial Inn,” she explained. “We already have dozens of weekends on hold. So we’re not concerned with Atlantic City.”

Pitney was, however. Among his many extracurricular activities, he served as Atlantic County notary, a job that included documenting the aftermath of shipwrecks in Absecon Inlet.

“Pitney fell in love with what would become Atlantic City, which had seven houses at the time, six belonging to one family,” Fitzgerald said.

INN-TERESTING HISTORY, BUT NOT MAIN DRAW

Pitney, who saw Atlantic City as a tonic for city-bound Philadelphians, took more than 10 years to convince investors and the state to build the railroad. In 1850, he began writing letters to Philadelphia newspapers extolling the virtues of Absecon Beach – Pitney’s proposed name, one which lost out to Philadelphia engineer Richard Osborne – as a health and summer resort, based on information in the historic register application.

These letters attracted the attention of factory owners with mills along the route, including those in Camden County. Along with Pitney, the owners would later become directors of the Camden & Atlantic Railroad board.

In 1852, New Jersey approved the charter for what one railroad man dubbed a “road to nowhere.” In early 1854 the governor approved Atlantic City's charter.

A.L. English wrote in the "History of Atlantic City": "There seems to be little doubt that Dr. Pitney was the real founder of Atlantic City, the spirit that first appreciated its wonderful curative powers, and placed effectively before capitalists its attractions: dryness of atmosphere, bathing facilities, gunning, fishing and sailing privileges.”

Atlantic City continued to grow until the 1960s when cheap air travel and a failure to reinvest in a tired resort led to its first downfall, one that lasted until the opening of casino gaming in 1978. The return to prominence had little to do with the decision to open a bed & breakfast in 1995.

But it didn’t hurt.

“I believe bed and breakfasts draw a different clientele then a casino so even the new one will survive, but it certainly helps to have shows, restaurants and casinos to help market the draw,” Clark said.

Though their web site mentions the proximity to Atlantic City, the Fitzgerald family said they bank on the community, their team and the natural appeal of the inn.

“We love the history associated with the house. But it’s not our main goal. People choose to stay here because it’s a beautiful building,” Walsh said.