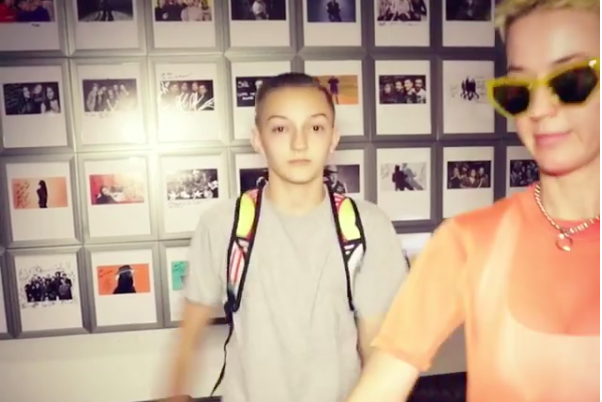 'The Backpack Kid' posted video on Instagram before taking the stage with Katy Perry on Saturday Night Live on May 20, 2017.

One important thing that I learned while watching this season of “Saturday Night Live” was less about the show and more about its audience in these politically tumultuous times.

This trend was so strong that websites on this here internet – ours included! – knew it was folly to do anything but share those embedded videos with its readership.

That remained the case this week when Dwayne “The Rock” Johnson “announced his bid for the presidency.”

And while many thought that was the highlight of the show, I’m here to tell you that that was not the case.

Nope. Not by a longshot.

You see, Katy Perry was the season finale’s musical guest.

And, as everybody knows, Katy Perry is an American treasure.

She performed her new release, an outright banger called “Swish Swish.” KP deemed this track an anthem against bullying. (Which is kinda what she said about "Firework," but who am I to call an American treasure out for messaging repetition.) Many saw it as the latest chapter in an ongoing feud with an inferior artist named Taylor Swift, though.

On the downside, Nicki Minaj – who gets “feat.” acknowledgment on said track – wasn’t on hand to drop her verses.

On the plus side, it provided a grand stage for America to meet Russell Horning, a 15-year-old Instagram star from Georgia.

I won’t delve too deeply into the overall performance itself, which was best described as KP’s “Beetlejuice Stefon Queer Rave.” (As in her costume looked as if it were from the movie “Beetlejuice,” and the performance – featuring numerous dancing drag queens – seemed inspired by former cast member Bill Heder’s wonderful character Stefon.)

Rather, it was Horning’s 48 seconds of TV fame that really stood out to me and to many of you as evidenced by the Q&A that Horning conducted with USA Today en route home.

Check it out in this video that's already queued up to the proper moment:

In the wee hours of a Sunday morning, it was nothing short of mesmerizing to watch Russell “swing my arms and sway my hips” in a move called either “The Russell” or “flossing.”

As far as I'm concerned, it was the best moment of SNL’s season, Spicey's puppet shows be damned. Sometimes, mentally escaping from the partisanship that controls a nation's narrative is the best thing possible to best protect one's mental health.

So, in any event, I tried to perform “The Russell” on Sunday morning. In doing so, I made a fool of myself.

I’ll try it again when KP arrives in Philly to perform at the Wells Fargo Center on Sept. 18. And if she shows up on the Art Museum steps like she did in 2014, I’ll try it again there, too.