Bad For You - Pepsi Fire

Remember what Pepsi accidentally did to MJ? 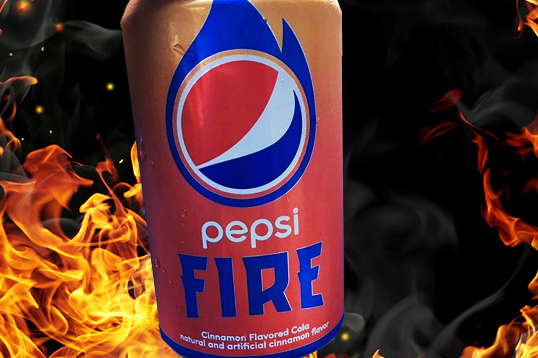 People like their beverages cold. Whether it’s water, beer, even coffee, it’s without a doubt – one of the three most refreshing temperatures. There’s even a classic local song about it. (“Remember G. Love & Special Sauce? They were real big on Y-100!”, said the ever-growingly out-of-touch man in me.)

The whole gimmick of soda is being cold. You put ice in it and everything. Nobody wants hot soda because that sounds as appetizing as mixing it with milk like Laverne. Trying to have it both ways, soda kings Pepsi have introduced a new limited edition flavor that, while cold, is also hot. Introducing Pepsi Fire, the cinnamon-flavored soda only available for eight weeks.

It’s a very interesting experiment. Will soda companies follow the same trend as liquor companies? Over the past few years, cinnamon-flavored drinks and whiskeys like Fireball or Jim Beam Fire have become a big hit. Plus, we already know that the company has been influenced by alcoholic drinks with the previously reviewed Mountain Dew Black Label.

Perhaps the more peculiar thing is the release date. Pepsi is pushing the new drink over the summertime, seemingly targeting young folks going to the beach or pool. In that respect, it’s a good season to advertise, but on the other hand, who wants to drink hot things when it’s hot? You don’t eat hot soup when it’s 92 degrees out, unless it’s gazpacho, which, as we all know, is a summer soup. While the soda will be cold, the taste will be spicy. That’s not going to cool you off on a hot day. I would think Pepsi would want to market it over the wintertime, spinning it as warming you up like cult-favorite Pepsi Holiday Spice.

While this is the first time it's hit the shelves in America, Pepsi Fire had already been released years ago in Mexico, Guam, Thailand and several other nations. There have been other Pepsi fires in the past as well: in our area, Pepsi will fire 80-100 people in what they claim was a result of the soda tax; there was that offensively tone deaf Kylie Jenner commercial which I’m sure resulted in a firing at the ad agency; even back in 1984, there was a Pepsi fire which caused Michael Jackson’s head to go up in flames.

So is Pepsi Fire as bad as its naysayers feared?

Not exactly. I expected this to contain a burn-your-throat level of cinnamon, but the end result is way more subtle than that. It’s akin to a regular bottle of soda with a couple of sticks of Big Red gum disintegrated into it. Most of the actual cinnamon flavor reaches you on the aftertaste and is not too overpowering. Perhaps this is a good mixer for cinnamon-flavored alcoholic drinks.

Yet, while not as bad as some predicted, it’s also not especially good. The best part of the drink is still the taste of Pepsi, with the cinnamon almost becoming a slight annoyance that gets in the way of the original.

This was a combination that I don’t think anyone ever wanted and now it’s here. It will likely be gone in two months, riding into the sunset as another lost cult-favorite soda. Years from now, there will be Facebook pages dedicated to bringing it back, but not enough "likes" to warrant it. It will live on in soda hell next to Pepsi Blue, Pepsi Kona and Cool Spot.

Verdict: If, for some reason, you wanted ever cinnamon in your soda, then this is your time. For everyone else, Pepsi Fire is a somewhat-unsavory carbonated oddity.