By Bryan Bierman
PhillyVoice Contributor
Bad For You Reuben
from 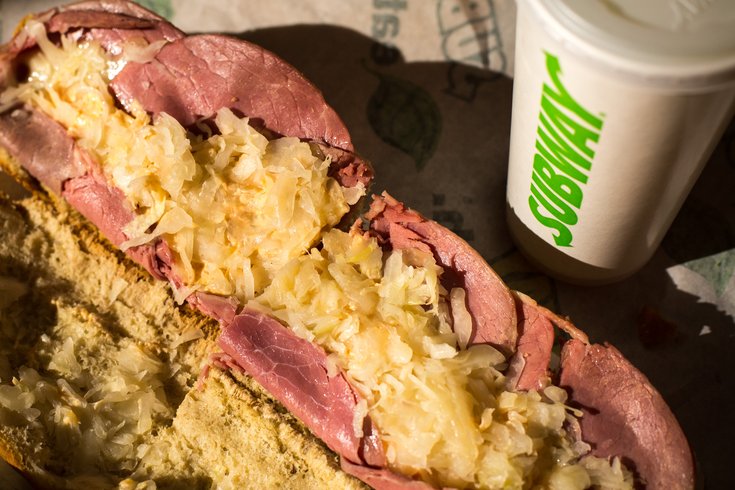 Inside Subway's Corned Beef Reuben you'll find sauerkraut, thousand island dressing - and corned beef, of course. This particular sandwich didn't come with Swiss cheese, but it's supposed to be included.

Over the past few years, fast food restaurant sales have been continuously dropping across the board. There are many factors theorized for this, from the drop in grocery prices to economic uncertainty.

Subway’s sales have dropped even more than the average. In 2014, the company’s overall sales dropped 3 percent, an estimated loss of $400 million. Last year, they dropped another 3.4 percent.

Years ago, Subway was one of the first fast food restaurants to brand itself as a healthy alternative. With their promise of fresher ingredients and tales of spokesperson Jared’s weight loss, conscious consumers all over the globe bought in, leading to the chain eventually expanding to over 44,000 restaurants in 110 countries. Subway became a real juggernaut in the fast food game and did it by offering something that the other chains didn’t.

Since then, there are a few big companies that joined in to supply this demand of supposedly healthy foods. Chains like Chipotle and even grocers like Trader Joe’s and Whole Foods began to eat into Subway’s profits, in addition to more options at its competing fast-food brethren. There are more options for healthy-ish fast food now than ever before.

An often-heard complaint of Subway is that their sandwiches don’t contain enough meat and cheese. Competitor Arby’s has seemingly tapped into this with their slogan promising that “[they] have the meats.” (Arby’s profits have recently gone up.)

Subway has fought these claims and slipping numbers by introducing more “meatier” meats like their new thick-carved turkey, rotisserie-roasted chicken and applewood-smoked bacon. 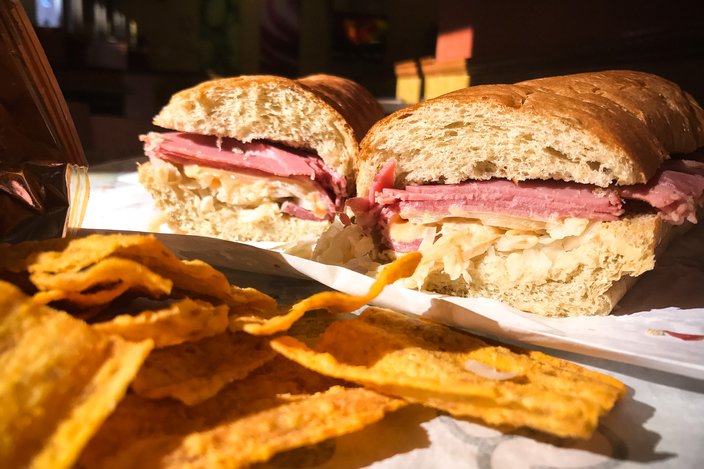 However, now that Subway has meatier sandwiches, they made a very cocky choice by offering two new Reuben sandwiches: corned beef or turkey. All of a sudden they’re experts now? Do they think they can already handle a Reub?

Corned beef Reubens are a staple of Jewish delicatessens everywhere. If you get a Reuben at the currently-fo-sale Famous 4th Street Deli, you’re gonna get a sandwich almost larger than your face that you’ll be eating for like a week. These things were made to be stacked to the brim with salted meats, heavy enough to dent the hood of a Hyundai if you were to drop it from a significant height.

So how does Subway’s new limited-time corned beef Reuben stack up?

First thing to note is that Subway’s isn’t exactly a Reuben, if we’re using the official Reuben recipe as written in the Bill of Rights. While a Reuben consists of corned beef, Swiss cheese, sauerkraut and Russian dressing on rye bread to be grilled, Subway’s uses the similar yet different Thousand Island dressing on a rye roll and toasts the sandwich.

The rye roll replacing rye bread just doesn’t have the same effect. Rye bread is usually harder than the Subway version and architecturally speaking, the stiffness of the bread helps keep the mound of meats from avalanching out onto your shirt. The larger size of the roll eradicates this problem.

There’s also just not as much meat and cheese as a standard Reuben. Obviously, they’re not gonna be serving up mile-highs, but there’s really only a few slices of corned beef here and a paltry amount of Swiss triangles. A “real” Reuben should be large enough to feed five moderately hungry alley cats. This would feed two and a kitten at best. They do have the option double the meat for $1.50 or $3 for footlongs.

There’s also a blandness to the corned beef that’s disappointing. It’s not inedible, though it doesn’t “pop” or “zing” like it should. Where’s all that zing?

The Thousand Island dressing is actually the star of the sandwich, even though it slightly goes against Reuben tradition. Russian dressing contains horseradish and other spices, while Subway’s G Island tastes like nothing but mayonnaise and ketchup mixed together.

Having said that, mayonnaise and ketchup mixed together is excellent.

Luckily, the smothering of savory dressing drowns out the zingless beef and sauerkraut to take over the dish, which ends up saving it. Unfortunately, it also completely blocks out the taste of the tiny cheese slices.

Verdict : It’s a thing you can eat but there are way better Reubens out there. Would also have preferred a skosh more zing.

Bonus Pun I Couldn’t Work Into The Article : Reub Goldberg