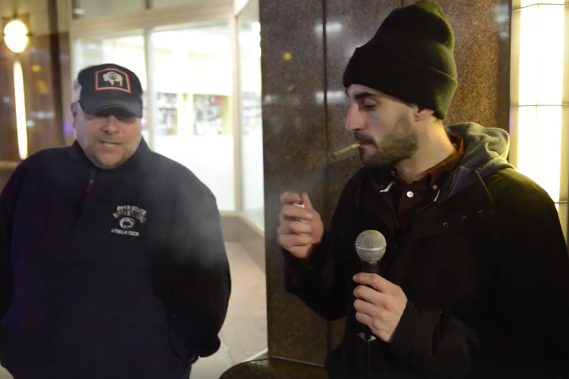 Marijuana activist Nikki Allan Poe lights a joint in front of a man during protests in Philadelphia.

Common Pleas Court Judge Tracy Brandeis-Roman knew she was “taking a chance” with the decision she was about to announce late Monday morning.

Still, she went ahead and rolled the dice as the defendant’s mother, sister, girlfriend’s parents, supporters, attorneys and a few reporters looked on.

When the day started, Richard Tamaccio – aka Nikki Allan Poe – was still being held at Curran Fromhold Correctional Facility on $250,000 bail nine days after Philadelphia police and the Department of Licenses and Inspections raided a marijuana “Smoke Session” party in Frankford. Tamaccio was saddled with some hefty charges including causing/risking a catastrophe.

His girlfriend, Rachael Friedman, was in the same bind, a level of legal entanglements that prompted her parents to fly in from California on Sunday night.

After a pair of morning hearings – the first of which included a gaggle of attorneys working out the hearing schedule for 20 co-defendants who face various lesser charges – Poe’s bail was set low enough that the $4,500 his mother Joanne had to her name would more than cover it.

That’s what had the judge worried.

“If there’s another party, we’re bringing him back in and he won’t get out until after the trial. That’s two years from now,” she said to Chuck Peruto, the defense attorney currently representing Poe.

“It would be really bad if he had a party and a fire broke out. My name would be on the front page of the newspaper, the judge who let him out,” she continued. “Not on my watch.”

That was expected to happen before day’s end, if it hasn't happened already.

Those several hours in court offered a glimpse into law-enforcement and the legal system’s take on the case itself.

“The cops knew. They had multiple undercover (officers) in the party from the beginning. Would they have been held accountable if something happened?” – Mike Whiter

On one side, you have those who support the defendants claiming it was a marijuana party that the police not only made too big a deal of, but allowed to continue in order to secure a bust of an outspoken activist who didn't exactly avoid the attention.

“I think the risking catastrophe thing is bulls***. I think it’s entrapment if nothing else,” said Mike Whiter, Poe’s friend and a former U.S. Marine with a focus on overmedicated soldiers and marijuana’s benefits for those suffering from post-traumatic stress disorder. “The cops watched people go in and out for two hours and they knew what it looked like in there.

“The cops knew. They had multiple undercover (officers) in the party from the beginning. Would they have been held accountable if something happened?”

On the other side, Assistant District Attorney Ryan Slavin maintained that “it was more than just a pot party in the basement.” The organizers – namely, Poe and Friedman – put together an event that could have proved catastrophic had fire broken out in the Worth Street warehouse, he said.

From Slavin’s perspective, the $250,000 bail was “appropriate based on the risk (the party presented) to the community in Frankford" had a fire broken out after party goers lit torches in a space where the smoke detectors were allegedly disabled.

“This is not as simple as a basement pot party,” he said. “Smoke detectors were disabled. There were armed guards there. This was a substantial risk to the community. This wasn’t just activists trying to lobby their Harrisburg legislators.”

Neither Poe nor Friedman, who is being represented by attorney Brad Shuttleworth, were in the courtroom for the hearing in the high-profile case, but there were certainly moments of levity.

Peruto told the judge that he’d known Poe’s mother so long that she’d seen him kiss his first girlfriend.

That basis of knowledge enabled him to declare that Poe wouldn’t miss hearings, and not just because “his mother would kill him” if he didn’t.

“He wants to go to trial, because he’s using the trial as a cause celebre,” maintained Peruto who sought a release on his client’s own recognizance.

When all was said and done, Brandeis-Roman knocked the pair’s bail down to $10,000 each which meant that they’d have to post $1,000 that did not come from illegal means.

The judge also reminded Poe’s mother that her son could not pay her back using funds gathered through drug sales.

Slavin also argued that Poe should be subject to random drug screening – “Everybody has different opinions (on marijuana legalization), but it’s illegal every time,” he said – which Peruto laughed off.

While telling the judge he thinks his client can refrain from hosting such parties between now and the trial because “he’s scared,” it’s not likely that he’d stop smoking marijuana.

In shooting down that request, Brandeis-Roman openly mulled the fact that decriminalization is the law of the Philadelphia land.

She did, however, restrict the defendants from leaving the commonwealth, which meant saying bye bye to a scheduled trip to Bermuda because “that’s what happens when you’re arrested.”

After the hearings, Peruto was asked whether he was concerned that federal prosecutors might step in to take the case away from locals, what with Attorney General Jeff Sessions railing against marijuana at a time when it's trending toward legalization or decriminalization across the country.

"Any time you have a high-profile case like this, that's a worry," he said, "but I don't think that will happen here."

While hearings for the other defendants are scheduled throughout the month, Poe and Friedman are due back in court for a status hearing on May 30.