The former Heisman Trophy winner was honored at his alma mater, but the QB's likeness resembles Glenn Howerton 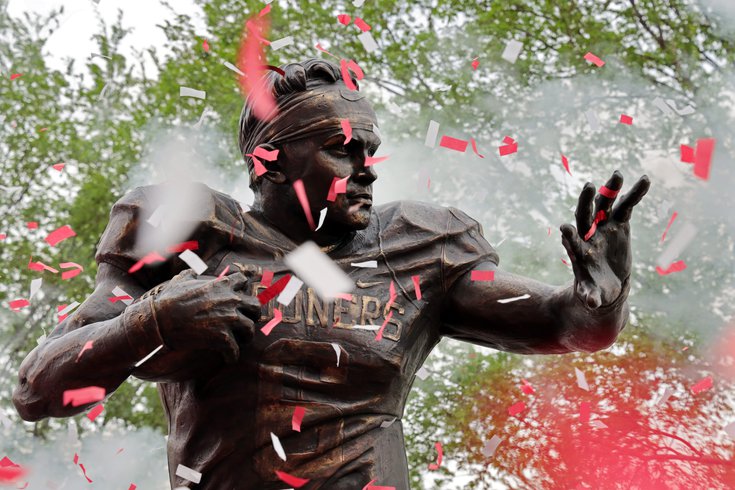 Confetti falls on Baker Mayfield's statue Saturday during its unveiling outside Gaylord Family/Oklahoma Memorial Stadium in Norman. Some say the statues makes Mayfield look like Dennis Reynolds, played by Glenn Howerton on 'It's Always Sunny in Philadelphia.'

As the dust settles on the first round of the 2022 NFL Draft, it's hard to reconcile the current predicament of Browns quarterback Baker Mayfield with the mountaintop he reached when he was taken with the first overall pick back in 2018.

Four years later, Mayfield is out of a job in Cleveland and not at all certain where he'll land next season, now that Deshaun Watson has emerged as his successor. Some of the doubt should be clarified as more quarterbacks come off the draft board Friday night, but Mayfield and 49ers quarterback Jimmy Garoppolo are both in a state of limbo waiting for the market to settle enough to scope out probable trade destinations.

Mayfield could still have a promising NFL career ahead of him. It's never been easy being a Brown, and he managed to help turn the franchise around through a lot of dysfunction. Even if Watson is an obvious upgrade — legal issues and a terrible perception notwithstanding — Mayfield would do well to remember his college achievements at the University of Oklahoma that won him a Heisman Trophy. It's not his fault the Browns were there to draft him, and their moral indifference is setting him free from the mess.

Last week, Mayfield returned to his alma mater to be honored with a statue recognizing his accomplishments on the field. Fellow Sooners and past Heisman winners Sam Bradford, Kyler Murray and Jason White were all on hand to support and congratulate Mayfield.

As far as statue criticism goes, the Mayfield statue doesn't look especially goofy or anything. The face is not the most faithful resemblance of Mayfield, but it's not unrecognizable as a whole piece.

The issue with it is that it looks a lot more like Dennis Reynolds, Glenn Howerton's deranged character on "It's Always Sunny in Philadelphia," than it does Baker Mayfield. A number of people couldn't help noticing this.

Mayfield may be a bit sensitive, but he's always had a good sense of humor. He's got to be able to laugh at this knowing it could have been a lot worse, like the travesty of the Cristiano Ronaldo statue or the "Mars Attacks"-level forehead on Peyton Manning's Hall of Fame bust.

The indignity here is that the sexual assault allegations against Deshaun Watson are a lot more Dennis Reynolds-like than anything Mayfield has ever done.

If nothing else, the statue at Oklahoma is a reminder that Mayfield isn't very far removed from those days and should get a legitimate chance to be the type of quarterback who flourishes somewhere else, even if it ends up taking a few seasons to shake out for him. He just needs to get out of Cleveland ASAP knowing it's doubtful he could fall much harder in his football life than Johnny Manziel, who's getting fan-ordered touchdown passes to Terrell Owens these days.