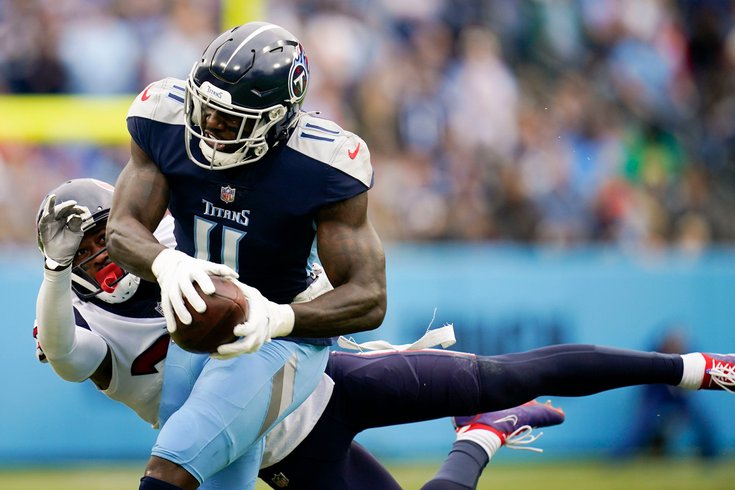 AJ Brown is an Eagle now...

In the first round of the 2022 NFL Draft, the Philadelphia Eagles added a massive man to their defensive line and a big-bodied, tackle-breaking stud to their wide receiving corps. We'll find out in time how good Jordan Davis becomes and how much of an impact A.J. Brown has on the Birds' offense.

For now, let's grade each move on the process of the acquisitions.

Assuming he stays healthy, Davis' floor will be that of a run-stuffing nose tackle on early downs. There's little doubt that he'll be at least that, whereas other prospects are a little more "boom or bust." As long as injuries don't derail him, Davis is virtually guaranteed to have a long NFL career as a rotational run down defensive tackle because of his sheer size and strength, again, at a minimum.

Of course, if that's all he becomes, then that is not the profile of the player that you're looking for with the 13th overall pick. There are some who point to Davis' underwhelming seven sacks over his 37-game college career, which is a reasonable concern.

The Eagles believe that Davis is more than just a run-stuffer.

"I think when you see a guy with that type of size, athleticism and explosion who loves to play the game, he did what they asked him to do in their defense," said personnel chief Andy Weidl, when asked if Davis can affect the passing game. "He fit the bill. He made them strong in the middle of the defense. But you saw the lateral quickness, you saw the range, you saw the ability to get down on the line of scrimmage and run down running backs and hawk down quarterbacks. So, we think he has it in his body, the explosion in his body. We're excited to get him in here and get him in our program."

We've covered Davis' athleticism at length, but humans like this just don't exist in nature.

I mean, the guy is 341 pounds and he ran a faster 40 time than some running backs and wide receivers. When Weidl says, "We think he has it in his body, the explosion in his body," that's an understatement.

As for doing "what they asked him to do," Davis did a lot of two-gapping at Georgia. What's that mean? The short-short explanation is that it's a technique in which the defensive lineman engages with the blocker, and he is responsible for the gap on each side. When the defender identifies which gap the play is heading toward, he is tasked with getting off that block and helping make the play. Davis is an outstanding two-gapper against the run. When you watch him play, you'll see a lot of this:

Over the years, we've become accustomed to watching defensive linemen attack up the field, whether that be in Jim Schwartz's or Jim Johnson's schemes. Eagles defensive linemen have mostly been tasked with one-gap assignments, trying penetrate through the line of scrimmage and creating disruption in the backfield. Under Jonathan Gannon, the Eagles do both.

Georgia's scheme was partly responsible for Georgia's defensive linemen not putting up huge numbers statistically, while the linebackers behind them did. It's why you saw Georgia have three players in Davis, Travon Walker (No. 1 overall), and Devonte Wyatt (No. 28 overall) get picked in the first round despite a lack of gaudy numbers.

But if given more opportunities to create disruption as opposed to just controlling the line of scrimmage, Davis is certainly capable. For example:

Jordan Davis when he gets to rush the passer…. pic.twitter.com/qBCMdqbonU

But even if he doesn't do that 👆 on a regular basis, Davis will require double teams, which will give his defensive line teammates one-on-one opportunities across the board. He will also push the pocket, limiting the ability for quarterbacks to step up to avoid the outside rush.

Another reason for Davis' lack of impressive numbers was that he only played a little more than 25 snaps per game for Georgia in 2021, which is a separate concern in and of itself. On the one hand, Georgia had an embarrassment of riches along their defensive line, which allowed them to rotate their linemen in and out of the game, keeping everyone fresh. However, Davis himself even admitted that his conditioning could have been better after an SEC title game loss to Alabama last season.

Credit him for being honest about himself as a player, but obviously, the Eagles are going to want him to be in optimal shape as a pro. Early in his career with the Eagles, he'll be part of an outstanding rotation on paper that will include Javon Hargrave, Fletcher Cox, and Milton Williams, so he should have time to get his stamina where it needs to be.

As for his personality, Davis is widely regarded as a well-liked teammate.

As for the cost to move up, it wasn't cheap.

"I think first, you have to think about where those draft picks are and the hit rates on those draft picks," Howie Roseman said, when asked about the six picks allocated to landing Davis and Brown. "All draft picks are not created equal. It's not like we gave up six first-round picks. I don't think that's necessarily fair to just say six picks. It's where they are."

That's true, however, the 2022 draft is regarded as a very deep one, so parting with a bunch of mid-round picks isn't ideal. Certainly, Roseman wouldn't downplay the third round pick he acquired from the Saints a few weeks ago.

Ultimately, the Eagles have a strong desire to be dominant in the trenches, and Davis brings good baseline value with a chance to be a special player.

First, let's be honest in pointing out that the Eagles traded for A.J. Brown because they whiffed so badly on the draft selections of J.J. Arcega-Whiteside and Jalen Reagor. If either of those players had panned out, the Eagles would have used the 18th overall pick on something else, whether that be on a rookie prospect, a trade back, a trade for some other player, etc.

It's not unlike when Roseman traded for Darius Slay after Sidney Jones and Rasul Douglas did not live up to expectations in Philly.

Now that we've gotten that disclaimer out of the way, the more important analysis here is... HOLY CRAP THE EAGLES GOT A.J. BROWN!!!

In our final Eagles-only mock draft, we had the Birds selecting Treylon Burks, a big-bodied, yards-after-catch machine who would perfectly complement the smooth route-running DeVonta Smith and the speedy Quez Watkins. The most common pro comparison for Burks? A.J. Brown! Ironically, the Titans selected Burks with the 18th overall pick they acquired from the Eagles.

The big difference is that the real A.J. Brown costs $25 million per season, while the "we hope he's A.J. Brown" guy will be on a cheap rookie contract for four years. Your preference may vary, but after all the Eagles' misses at the wide receiver position over the years, maybe just getting the real A.J. Brown is the better move.

Looking ahead, a major positional weakness is now a strength. Smith and Brown have a chance to become one of the best wide receiver duos in the league.

There is downside. Brown's rugged style of play puts theoretically puts him at higher risk for injury, but ultimately I respect the big swing by Howie.