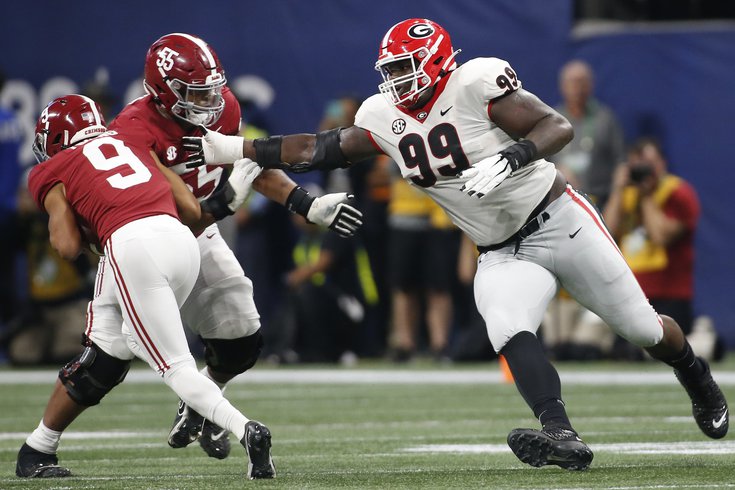 The 2022 NFL Draft is now three days away, so let's go ahead and put out our final Philadelphia Eagles-only mock draft of the season. As a reminder, after various trades, the Eagles currently have 10 draft picks this year, with two in the first round.

There are many who believe that Davis is just a run stuffer who will play a very limited number of snaps. I would disagree with both assessments. Davis played on one of the most talented and deepest defenses in NCAA history. As such, he often gave way to very talented pass rushers who kicked inside on passing downs. Hell, a potential top 10 pick in this draft (Jermaine Johnson) transferred out of Georgia just so that he could play.

As a pass rusher, Davis has extreme size, strength, and quickness. He's going to make plays, but even if he never becomes a guy who puts up big sack numbers, he can still be very effective. He is a player that centers will not be able to single block, so he'll at least provide one-on-one matchups across the board against the pass when he's doubled. Against the run, if you plop this dude down in the middle of the line, thus allowing Jonathan Gannon to commit fewer resources toward stopping the run, he would make a lot of sense in the Eagles' defense.

But at a more basic analytical level, Davis is a "unicorn." There may not be anyone on Earth his size who can do what he can do athletically, and in my opinion, he would be way too hard to pass up. Don't overthink it. Just take the freak of nature.

As you might expect of a player his size, Burks is able to run through tackle attempts by much smaller defensive backs, and is a yards-after-catch beast. He was also a deep threat down the field, both running away from defenders on go routes, and making contested catches on fades. Most importantly, he can, you know, actually catch the football. A highlight reel:

Burks was productive the last two seasons, averaging 5.6 catches for 92 yards and just shy of 1 TD per game:

Admittedly, some of that came on manufactured touches. Of course, he was also Arkansas' best skill position player, usually drawing special attention from opposing defenses, and he still consistently averaged over 16 yards per catch despite a high volume of targets within 10 yards of the line of scrimmage.

Some enthusiasm for Burks waned after the Combine, when he ran a disappointing 4.55 40. That timed speed did not jibe with his actual tape, as he routinely dusted SEC corners and fared well on the GPS.

Treylon Burks hits 21.9 MPH as he's catching the ball here. It isn't just speed. It's the ability to accelerate to the ball that makes Burks so special. This acceleration is what allows him to get YAC on deep balls.pic.twitter.com/i4cACMib8E

In other words, the notion that Burks isn't fast is nonsense, in my opinion. The bigger concern areas for me would be his bad 7.28 3-cone time, and his route running, which isn't bad, but isn't a plus attribute.

But ultimately, what Burks does well outweighs some of the areas of concern. As for his fit in Philly's offense, he fills an immediate need in the slot and would give Jalen Hurts a target for easy throws who can make plays with the ball in his hands.

If you've followed NFL mock drafts throughout the entire offseason (and not just more recently), you no doubt saw Ojabo commonly linked to the Eagles. Unfortunately, Ojabo tore his Achilles while working out at his pro day.

God got me!! ima be back stronger than ever🖤all part of my story.

Ojabo is inexperienced, as he has only played in 14 career college games. He was born in Nigeria, and moved to Scotland, before heading to the United States for high school. That makes his 2021 breakout season for Michigan all the more impressive, as he collected 35 tackles, 11 sacks, 5 forced fumbles, and 3 batted passes.

After a strong performance at the NFL Combine, where he ran a 4.55 40 time, Ojabo solidified his lock first-round pick status. The Achilles injury likely changed that, obviously.

The Eagles have taken swings on injured players in the second round in recent years, with mixed success. Cornerback Sidney Jones also tore his Achilles at his pro day in 2017, and the Eagles selected him at 43rd overall. That didn't work out. In 2021, they selected Landon Dickerson 37th overall. Dickerson had a long injury history in college, including a torn ACL in December of 2020. So far, it looks like that gamble will pay off.

Ojabo likely won't make it to the Eagles in the second round at pick 51, but a modest trade up should get it done, if the Eagles are OK with the early stages of his recovery.

Taylor-Britt is a versatile player who has had success both at safety and cornerback for Nebraska. For example, in 2019 playing (mostly) safety, he had four forced fumbles, and three INTs (including a pick-6). As a corner in 2021, he had 51 tackles and 11 pass breakups.

He is a physical, aggressive hitter in run support, and a smart player who is particularly good in zone coverage. A look:

I think what Nick Sirianni will love about Taylor-Britt is that he is a competitive player. I loved watching him at the Senior Bowl this year, for stuff like this:

I think he's more likely a corner in the NFL than a safety.

Pierce didn't get as many opportunities as he should have while playing in a running back by committee offense at Florida. Over his four years in college, he only had 329 career carries, with a season high of 106. In 2021, he had 16 total TDs, and he was a standout during Senior Bowl practices.

At 5'10, 218, Pierce has a low center of gravity. He has great balance, lateral agility, and tackle-breaking power. He also has some receiving chops, as he caught 19 passes for 216 yards and 3 TDs, again, in limited usage. A look:

There are a ton of hefty, tackle breaking backs in this year's draft, and the Eagles should be able to land one on Day 3. Pierce is one of my favorites in this class.

If you strip out positional importance, Araiza might be the best player in college football. Like, this dude has some kind of bionic leg. And he can hit! Yes, you will watch this punter highlight reel:

Araiza was also SDSU's kicker. He was a good college kicker, too, though he's not as good at placekicking as he is at punting. For his career, he hit on 73.5 percent of his field goals, and 96 of 97 on PATs. He had three makes of over 50 yards in 2021, though he probably won't kick in the pros, unless it's an emergency.

Arryn Siposs struggled mightily down the stretch for the Eagles, and needs to be replaced. Why not with a guy who might become the best punter in the NFL?

There are some who believe Araiza could get picked on Day 2. That's nuts. If some dumbass takes a punter on Day 2, just fire them immediately. But in Round 5, where you already have a bunch of other picks? Sure, what the hell. Make punting "must watch TV."

The Eagles love them some versatile offensive linemen, and Tom played both at OT and C at Wake Forest. His home in the NFL will almost certainly be at center, and he brings outstanding athleticism to the position.

Give Jeff Stoutland a year to coach this guy up to eventually take over for Jason Kelce.

Smith was a highly rated player coming out of high school (22nd ESPN, 39th Rivals) who didn't have much in the way of splash plays (one career INT, 1 FF) at Penn State, but did at least have decent tackle production in 2021 (81 tackles, second on the team).

Any team drafting Smith will be doing so on his impressive blend of size and athleticism.

Unfortunately, Smith was more of a workout warrior than a trustworthy player in Penn State's defense, and it'll be a big challenge for any team drafting him to get him to live up to his potential. Maybe someone will draft him sooner? If not, the fifth round is appropriate value as an upside flier, in my opinion.

McKinley doesn't have great size, and he didn't have a great workout at the Combine, but he is a highly instinctual, productive, playmaking safety who had 77 tackles and 6 INTs for Oregon in 2021.

The Eagles have a rather obvious need at safety, and McKinley is perhaps a player who can help immediately because of his high football IQ.

Waletzko competed at the Senior Bowl, and held his own against some highly rated edge rushers. He here is in the game (LT, green helmet):

Wow! Great job @matt_waletzko on the 2nd level LB! 💥 Making the most of his reps!!! pic.twitter.com/jWNqWttalA

I'd be lying if I said I watched any of North Dakota's games, but read any scouting report on him, and they all say the same thing — that he needs to add functional strength, and is a multi-year project.

For the Eagles' purposes, that's fine. Like with Tom above, let Stoutland groom Waletzko over time, and potentially have him ready to contribute in 2023 or 2024.