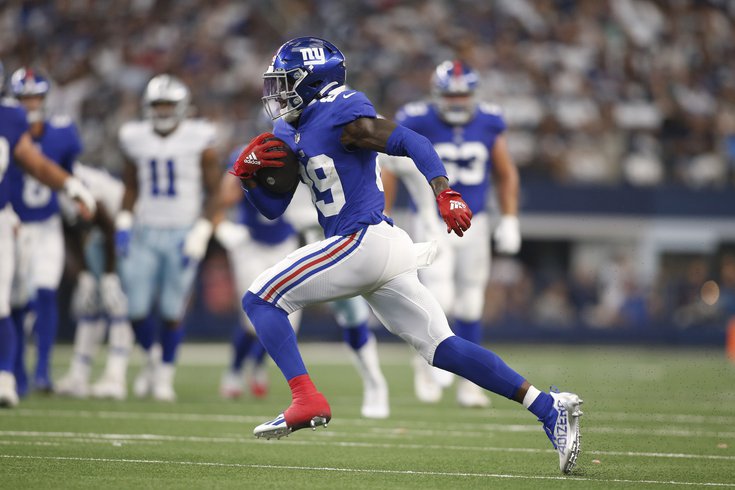 We didn't have a chat this week, but I solicited questions and comments from Twitter and via email so that we could still have our weekly mailbag. Let's just get right to it.

Question from Obed Torres: List your 3 favorite non-first-rounders this draft.

1) Cam Taylor-Britt, CB, Nebraska: He's a versatile player who has had success both at safety and cornerback. For example, in 2019 playing (mostly) safety, he had four forced fumbles, and three INTs (including a pick-6). As a corner in 2021, he had 51 tackles and 11 pass breakups. He's a smart player who is particularly good in zone coverage, and thus a good fit for this defense, but he makes this list because he is a physical player who is an aggressive hitter in run support, and he's super competitive. I loved watching him at the Senior Bowl, for stuff like this:

There's also just something about the No. 0 that I like on the type of player he is for some dumb reason.

Question from Andrew Stevens: Would you trade 15 to Detroit for 32 and 34?

On the trade the Eagles did with the Saints this year, or even the one they did last year with the Dolphins, those were too sweet to risk losing by saying, "Welllll, maybe when we're on the clock."

But on a trade scenario like this with the Lions, you wouldn't ever do that before the draft begins, because for all we know a player who has no business falling could fall. There are certain players I would rather have than a couple of picks in the low 30's. But if those guys are all gone at 15, then sure, that's not a bad trade-back option.

Question from Nick Becker: There’s a hopeful but realistic dream scenario where the Eagles get Kyle Hamilton and Jordan Davis in the first. If that (or two other good defenders) are picked in the first, who are your favorite WR targets at 51 or later? (I like the X profile of Alec Pierce)?

It would be hard for me to see Hamilton getting past Washington at pick No. 11, but you never know. I think Davis is more likely to be available at 15.

As for second round receivers, I think you're looking at guys like George Pickens, Christian Watson, Jalen Tolbert, and Skyy Moore. And sure, Pierce is 6'3 and he runs a 4.41, so he could sneak into that group as well.

I think Pickens is the guy who offers the most upside, but is a gamble because of his injury history. While Nick Sirianni would rightfully claim that X receivers can come in all different shapes and sizes, Pickens would fit sort of the classic X receiver description.

Question from Joshua Murray: Which of the second-tier LBs do you prefer for the Eagles? Assuming Devin Lloyd and Nakobe Dean are tier 1, I’m thinking Troy Andersen, Christian Harris, Chad Muma, and Quay Walker would be tier 2. If all four of those second tier guys are there at 51, who would you choose?

Your "tier 2" is probably about right. Some might have Walker in "tier 1," and some might add Wisconsin's Leo Chenal to "tier 2."

Of your four, I'd take Walker for his blend of size, athleticism, and ability to do a little of everything. He's a three-down linebacker. The group as a whole is really impressive in terms of measurables. Links to spider charts:

I think there are good values to be had at linebacker in Rounds 2 and 3.

Question from Todd Bailey: Of the approximately 27 other CBs they currently have on the roster and assuming they don’t draft another one early, who is most likely to start opposite Slay?

Of the players currently on the roster, it's Zech McPhearson. We did a deep dive on his 2021 season here. The team's reported interest in Stephon Gilmore is interesting. If that reporting was accurate, it means they had some level of interest in adding a one-year Band-Aid, though my guess is that it would have been after the draft if they did not take one with an early pick.

Question from Braman: I know you’re not excited about Drake London (neither am I). That’s why I’m gonna trust your answer to this question: If the Eagles draft him, what would have to happen for this to actually turn into a brilliant addition to our offense?

I actually think he'd be a good fit. He played in the slot quite a bit at USC, and one of the best things he does is work the open areas of the field against zone coverage. That type of player could be effective in an offense led by a mobile quarterback that is likely to see a lot of zone coverage from opposing defenses. And with a wide catch radius, London's presence would help a quarterback who doesn't always have pinpoint accuracy. London could absolutely have success in the Eagles' offense.

Question from Jack Fogarty: Should the Eagles trade for Kadarius Toney?

In case any of you missed it, the Giants are looking to trade Toney, per Pat Leonard of the New York Daily News.

🚨BREAKING: Giants are looking to trade WR Kadarius Toney, making calls on what they can get for their 2021 1st round pick https://t.co/dr3EjB0iDe https://t.co/S8yiQQZYCR

As a rookie last year, Toney skipped OTAs. Which, I mean, really? According to Dan Duggan of The Athletic, it was because he hadn't yet signed his rookie contract, even though rookies routinely participate in offseason activities sans contracts because they're covered by rookie participation agreements.

This year, he's skipping them again, despite the team bringing in a new coaching staff. Toney is talented and he showed exciting flashes as a rookie, but I can't imagine Nick Sirianni isn't going to want that guy anywhere near his team.

Question from Jan Mellon: Greater chance of being traded during the draft, Andre Dillard or Jalen Reagor?

Dillard should have value to other teams around the league. Reagor likely does not. So I'll say Dillard, followed by Gardner Minshew. I don't think any players already on the roster will be dealt next weekend, though.

Question from Zach Teutsch: What's Milton Williams' best plausible outcome? What do you think the most likely outcome is?

That unproductive early part of the season was probably to be expected of a late bloomer from a smaller school who had sort of bounced around at a few different positions. I think he projects as a rotational guy in 2022, like he was as a rookie, but I think you'll see a full year of production instead of having to wait a while for the light to go on. He has a chance to become a good starter in the NFL, but he'll have to wait for Fletcher Cox to clear out of the way.

One of the things that stood out to me last offseason when watching Jordan Mailata's 2020 season was how he looked to punish defensive linemen as his confidence grew. He was bigger and stronger than everyone, and once he began to refine his technique, he could become a bully on the field. I think the Eagles would like to see Williams begin to realize that he's stronger and more athletic than almost anyone who attempts to block him (we've all seen his spider chart, right?), and as he becomes more comfortable with how to play at the professional level, it would be nice to see some nastiness.

Question from DawkinsJersey: How much urgency is there to draft Jason Kelce's replacement? Cam Jurgens seems like an intriguing third-round pick.

If you an get a good value on a guy like Jurgens or Zach Tom (Wake Forest), then those types of highly athletic players would be in a great position to learn under Kelce and Jeff Stoutland for a year or so before eventually taking over at center. But I don't think it's something they need to do urgently.

Because they have some G/C versatile starters on the team already in Landon Dickerson and Isaac Seumalo, the Eagles have some flexibility in how their offensive line will look whenever Kelce hangs up his cleats. They shouldn't rush finding an apples-to-apples replacement like Jurgens, Tom, or Tyler Linderbaum, for example, unless the value is truly there.

Question from Steve Bond: Do you think the "center of the future” is on the roster right now or will he be drafted?

I think he'll be drafted, in 2023. As a disclaimer, I can't claim to know what the center position will look like in the 2023 draft.

Question from Kev O'Content Jr.: As much as we dog Lurie for keeping Howie long-term, isn't it nice having a GM who isn't looking to save his job by making only short-term focused moves out of desperation? I'm loving the "accumulate high draft picks long-term" kick he's been on since moving Wentz.

Even though it was such an obvious fleecing, the trade that Howie made with the Saints isn't one that a lot of other GM's around the league would be willing to make, because they feel like they need to win now. So yes, one of Howie's strengths is his indestructibility, which allows him to make moves that are beneficial long-term.

Question from Ezekiel Quasar: Mike Florio (PFT) wrote an article about Howie Roseman's comments that the Eagles needed to be different than other teams to escape mediocrity. He thought this meant that you settle on a second-tier quarterback and build a leviathan around him. Given the crazy money being given to quarterbacks and wide receivers, any sense to this?

I respect Mike for thinking outside the box, but no, the Eagles tried to trade for Russell Wilson and Deshaun Watson this offseason. They are very much interested in adding a top-tier quarterback, and if they find the right one, they will be more than willing to compensate that player richly.

Also, I had to google leviathan.

Question from J.R. Willis: If Andy Weidl is hired for the Steelers' GM job, who do you see as Howie’s next lieutenant? Mike Mayock?

The Eagles have touted for years that they really value their ability to develop future general managers in their scouting department. In fact, it was something that Jeffrey Lurie pointed to as one of Howie's strengths after the 2020 season at a time when he really had to reach deep for something.

My bet is that they'd promote someone from within.