Fried chicken and Champagne pair together at Bar Poulet in Rittenhouse

The new restaurant will serve buckets and bubbles 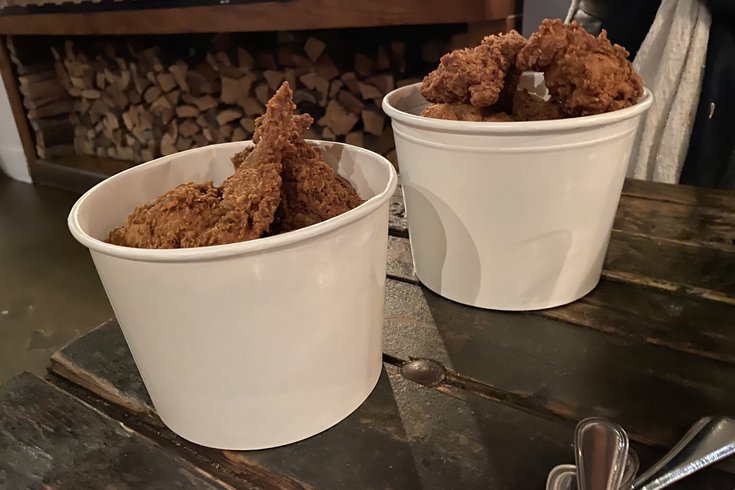 Bar Poulet, a fancy fried chicken bar concept, is set to open sometime in late April. The restaurant will serve buckets of fried chicken alongside glasses of bubbly.

Bar Poulet is coming to Rittenhouse, selling buckets of fried chicken and glasses of Champagne.

Buckets of fried chicken will be available for both dine-in and takeout. The chicken is organic, antibiotic-free and certified humane raised and handled, states Bar Poulet.

It will be served hot with a choice of dipping sauces. The French-inspired options include dijonnaise, "beer-naise," roquefort, curry mayonnaise, black pepper-lavender honey and truffle velouté.

There will be a few options for vegetarians, too. Bar Poulet also will offer fried portobello and maitake mushrooms "prepared with the same care as their tender chicken," as well as appetizers and side dishes.

Plus, two desserts will be on the menu. The salted crème caramel and the mousse au chocolat will be offered as a sweet ending to a savory meal.

The Tria Taproom space has been transformed for the new concept with reclaimed wood floors, tufted green banquettes and marble tabletops, in an effort to play up Bar Poulet's French vibe.

To pair with the fried chicken will be a completely French wine list, overseen by Tria wine director Lauren Harris. Sparkling wines are the main attraction, but there will be a range of other wines, too, all available by the glass. Whiskey, craft beer, cider and draft cocktails will round out the drinks menu.

Bar Poulet will offer dine-in, takeout, delivery and contactless curbside pickup. The restaurant also plans to offer a special to-go package, in addition to the buckets of chicken. The Chicks & Champs for Two will be a prix-fixe menu that includes chicken, dessert and a bottle of sparkling wine. Additional details will become available following the restaurant's opening.

"The odd-couple pairing of bubbles and birds has taken on a life of its own in recent years," said Myerow. "Champagne is a well-known palate cleanser due to its acidity, and that tongue-tickling effervescence cuts through rich, heavy foods like fried chicken. Besides, who doesn’t love a glaring contradiction? The irony of this pairing and the stylish setting is 100% intentional."