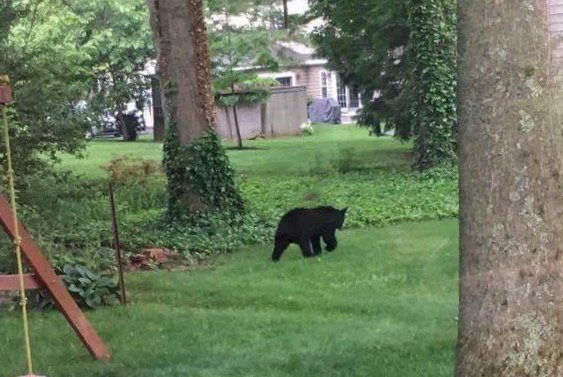 This black bear was spotted in the Old Orchard section of Doylestown on Thursday, June 1.

After the conclusion of #BearWatch2016, in which many local media outlets tracked the seemingly frequent sightings of the animals in the Philadelphia suburbs last summer, PhillyVoice spoke to Pennsylvania Game Commission official Dustin Stoner, who confirmed that "our bear population has been increasing over the past several decades."

Sure enough, the trend seems to be starting up again this year. The borough of Doylestown posted the following message and photo to social media Thursday morning:

A black bear has been sighted and was last seen in the Chapman pool area of Doylestown Borough. The Gaming Commission is aware and in the area. Please DO NOT attempt to interact or feed the bear. Any sightings should be reported to the Radio Room at 215-348-3524.

Bear spotted this morning in Old Orchard. Use caution and keep pets inside. pic.twitter.com/SOXNszdT5l

Stoner told us in March that the public shouldn't fear bears in the area but also noted that you should leave bears alone and not harass them. For more information about bears in the Philly area, read more here.