Brady, Belichick say they don't know how balls were deflated 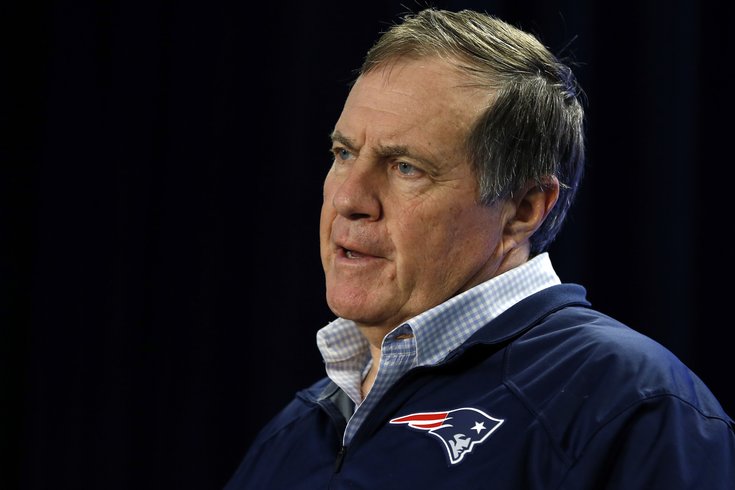 Patriots coach Bill Belichick speaks during a news conference prior to a team practice in Foxborough, Mass., Thursday.

FOXBOROUGH, Mass. — The two men most responsible for delivering wins for the New England Patriots both said Thursday they have no explanation for how footballs used to reach the Super Bowl were underinflated by 2 pounds per square inch.

Patriots quarterback Tom Brady said he has not been contacted by the NFL, even as league officials investigate whether the team cheated against the Indianapolis Colts.

"I get the snap, I drop back, I throw the ball," Brady said. "I don't sit there and try to squeeze it and determine that."

Unlike Belichick, who briefly answered questions after a long opening remark by repeatedly saying "I've told you everything I know" and "I don't have an explanation," Brady answered many questions and said he doesn't think about football conditions during games.

"I get the snap, I drop back, I throw the ball," Brady said. "I don't sit there and try to squeeze it and determine that."

He does, however, have his preferences — he likes the football to be pumped to 12.5 pounds per square inch of air pressure, he said. The NFL requires balls to be inflated between 12.5 and 13.5 pound per square inch.

"To me, that's a perfect grip for the football," he said. "I would never do anything outside the rules of play."

With different approaches, Belichick and Brady sent a unified message: Both said they have no clue how the footballs were tampered with or switched, and started learning about the issue along with fans and everyone else.

"I have no knowledge of anything, any wrongdoing," Brady said when asked who on the Patriots was responsible for the underinflated footballs. "I'm very comfortable saying nobody did it as far as I know."

Brady said he picks the game balls he wants to use several hours before kickoff, then doesn't think about them at all. He said he didn't know the protocol for handling game balls after he chooses them.

"Once I approve the ball that's the ball that I expect out there on the field," Brady said. "It wasn't even a thought, inkling or concern of mine that they weren't the same ball."

Belichick said that before this week, he didn't give air pressure in footballs much thought at all.

"I've learned a lot more about this process in the last three days than I knew or have talked about it in the last 40 years that I've coached in this league," Belichick said during an 8 1/2-minute opening statement during an 11 1/2-minute news conference Thursday morning.

While neither Belichick nor Brady took responsibility for the underinflated balls, neither absolved anyone besides themselves of potential wrongdoing.

Softer balls are generally considered easier to throw and catch, and quarterbacks, specialists and equipment managers are known to have very individualized preferences in how footballs are readied for games. Belichick said he was unaware of the process for game balls until the accusations were raised.

Belichick said he sometimes hears quarterbacks, kickers and other specialists talk about their preferences.

"I can tell you and they will tell you that there is never any sympathy from me whatsoever on that subject. Zero," Belichick said.

Under league rules, each team provides 12 balls for use on offense. Referees approve the balls more than 2 hours before game time, then keep the balls until they're turned over to ball handlers provided by home teams just before kickoff.

Belichick said the balls used by the Patriots offense are inflated to the "12 1/2-pound range" and "any deflation would then take us under that."

Going forward, he said, the Patriots will inflate footballs to a safe level to prevent them from dropping under allowable air pressure during games.

The coach who has won three Super Bowls said he generally forces players to practice under bad-ball conditions.

The issue has drawn inflated reaction from around the game and its fans as the Patriots prepare to play the Seattle Seahawks on Feb. 1 in Glendale, Arizona, for the NFL title.

Several players said it would not distract them in preparing for the game.

"We'd rather be celebrating our trip to the Super Bowl," special teams captain Matthew Slater said. "It's important to us that we respect the game and deal with things in a way that's considered professional."

But Brady said the topic of the sport's integrity is serious.

"Everyone's trying to figure out what happened but at the same time you've got to prepare for the Seahawks," he said.