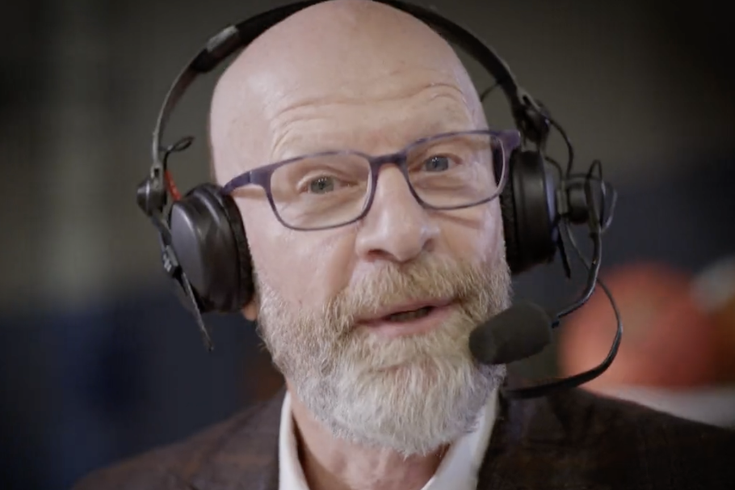 The Philadelphia 76ers' season has been held hostage by a holdout and trade demand from All-Star guard Ben Simmons, who hasn't suited up for the team since their Game 7 playoff defeat against the Atlanta Hawks over the summer.

Sixers fans have understandably grown weary of the stalemate as the team looks for a suitable trade, but president of basketball operations Daryl Morey may have an unconventional option to turn to, if need be.

In a hilarious political campaign ad, Pennsylvania Attorney General Josh Shapiro, who's running for governor in 2022, teamed up with beloved former Sixers broadcaster Marc Zumoff to show off his capabilities at the free throw line.

As your Governor, I’ll always work to turn *garbage into gold* and put points on the board for Pennsylvanians. @MarcZumoff, I’m ready to get in the game. pic.twitter.com/e2x3xN0jwB

"We're hearing a lot of talk from the Sixers about trading for a new All-Star guard who can make free throws down the stretch," Zumoff says in the ad. "Josh Shapiro is at the top of their list."

Shapiro claims to have knocked down 11 free throws in a row during the making of this ad. That's kind of an arbitrary number. Maybe he's not making it up?

Simmons, of course, shot an abysmal 32.7% from the foul line during the Hawks series and showed virtually no offensive initiative as the Sixers squandered their best chance to contend for a championship in 20 years.

Shapiro, 48, was re-elected attorney general last month and is the Democratic party's presumptive nominee for next year's gubernatorial election. A former state representative and chair of the Montgomery County Board of Commissioners, Shapiro has been regarded as a protege of Gov. Tom Wolf, who is finishing out his second term.

Zumoff, 65, retired as the Sixers' play-by-play announcer in June after 27 years calling games and a legendary collection of situational phrases.

In what figures to be a contentious race next year, Shapiro is opening his campaign with a pretty great warm-up that should keep him fresh on the minds of pivotal Philadelphia voters, who he'll need to be engaged and ready to turn out in full force.