Ben Simmons' leadership was more important than his jumper vs. Knicks 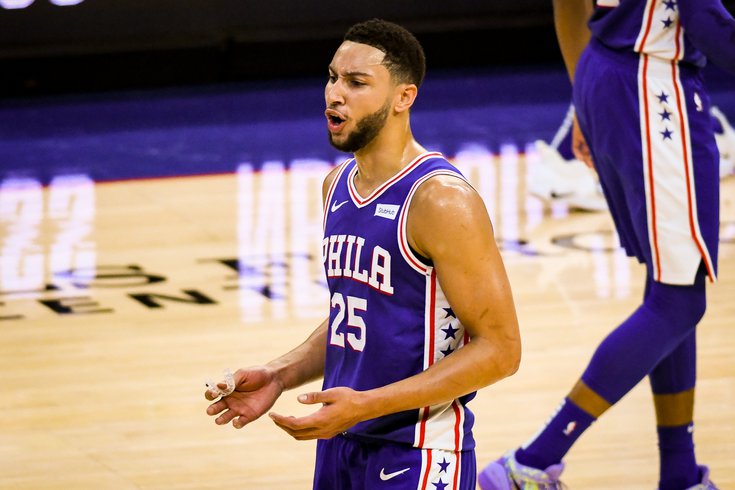 Ben Simmons is famously stoic. He is the sort of person who could perplex a mood ring, pregame emoji tweets aside. JJ Redick used to call him "the man who sits behind the glass" for his habit of looking removed from the moments unfolding around him on the court, and when Simmons hit his first three in the preseason, the image of he and Joel Embiid running down the court together couldn't have summed them up better as people — Embiid with a shit-eating grin on his face, Simmons as serious as he has ever been.

His reaction to his first three in a regular-season game, then, was classic Simmons. But on the other end of the floor, with Philadelphia falling into a double-digit hole in the third quarter, was quite the opposite. He was bold, loud, even demonstrative for the Sixers in the second half, barking after forced turnovers and trying to vocally lift the Sixers up on top of doing so with his play.

It is a side of Simmons we don't often see, and one the Sixers needed desperately.

"I thought Ben's defensive intensity was as good as it has been," Brett Brown said after the game. "I thought he was outstanding with his presence. I really thought he helped change the whole landscape, especially in the second half."

These are plays fans are accustomed to seeing from the scrappers of the NBA, the guys like T.J. McConnell, Patrick Beverley, and the men who make their living annoying the hell out of their opponents. But down double digits, it was Simmons who decided he would be the guy to try to liven things up and take a game back from an inferior opponent. The results and attitude were interconnected.

"He was great man, he was telling us to pick up our defense and be more physical, myself included," Mike Scott said after the game. "His athleticism, he hit that shot and I mean that feels good for him. He's our leader."

That much was reflected in how the Sixers allowed him to approach the game. In Brett Brown's world, being "the point guard" is not just some throwaway title. And Brown gave him a lot of rope with which to work as Wednesday's game went along. Simmons, he says, was given the freedom to call plays for the Sixers out of free throws based on what he thought was working on the floor.

(Philadelphia, it's worth pointing out, had just 10 turnovers on the evening, a number far below their season average of 17 per game.)

And that gets at an important point the Sixers mention it a lot that is often glossed over by the public: Simmons has been unreasonably successful through two seasons and change as an NBA point guard despite spending a lot of his amateur days as a bull-in-a-china-shop forward. The job of being the team's guide through calm and rocky waters alike is tough for any player, let alone one making foundational changes to his game on the fly.

As a result, his coach and his teammates have been publicly patient with Simmons to a degree that has actually generated criticism. But even in the wake of this long-awaited moment, they walked on that same path.

"The spacing is going to be a little different [if he takes threes], but I told him yesterday just to be himself. Obviously I'm extremely happy for him, I'm extremely happy that he gets to do that and he actually made it," Joel Embiid said after the game. "He's a basketball player, whatever he feels comfortable doing I support him. So if he wants to do that, great, if he doesn't, great, we're going to figure it out either way."

It's a bit easier to say that with a straight face when Simmons is the defensive equivalent of the Tazmanian Devil for the last 18 minutes of the game, but the Sixers are on this journey with him, for better or for worse. Wednesday was the former in emphatic fashion.

Rotational changes behind the starters

Given the start in Josh Richardson's absence, Furkan Korkmaz had a disastrous outing against New York. He lasted just 3:35 in the second half before Brown called a timeout, boos echoing through the arena, almost exclusively to get him out of the game and remove the defensive target.

They threw stuff at the wall and tried to figure out what would work. And to open the fourth quarter, Brown landed on a lineup choice I mentioned when Richardson was ruled out, with Burke playing alongside Simmons. It worked.

"I thought his intensity changed the speed, the energy in the gym," Brown said. "You end up going to a point guard, a scoring point guard like Trey is, and treating him like [Allen Iverson]. Letting him kind of run off of the ball, looping him up and giving him the ball, putting him in pick-and-rolls, I thought he was really good. But the iterations to get to that were frustrating."

It is frustrating on some level that Brown hadn't tried this style of lineup before circumstances forced his hand. Playing T.J. McConnell alongside Simmons was a frequent occurrence for Brown in years past, and now the Sixers have two backup guards who can play in that same role with an offensive package that fits much cleaner.

But that's life as a backup in the NBA. Burke, who went from superstar college guard to a young man out of his depth when he entered the league, is now a veteran who has seen many sides of the business, very much aware of his own mortality.

"I was in a situation last year in New York where I was in the G-League, got called up, was kind of the last man on the bench, and then a month later I was playing 30-plus minutes a night. Situations could change depending on your mentality," Burke said. "I know it's easier said than done staying locked in mentally, you got to have something you can lean on when things get tough because we're humans as well. We gotta go home and face reality just like everybody else."

For now, the pendulum is swinging in his favor.

Sometimes the numbers speak for themselves. You can print these in big, bold letters:

Anyone with eyeballs has seen the Sixers struggle to make it work with two big men on the floor at a time. It's no indictment of Horford, who has fared better as a center without Embiid, too, but it is reflective of a fundamental issue with their team construction.

Horford had a nightmare game against the Knicks, and a few nice defensive plays aside, the Sixers were better off with him on the bench. The pitfalls of single-game plus/minus are real, but his big —15 felt representative of the team's struggle with him on Wednesday, and Brown had the guts to leave him out of the closing lineup against the Knicks, sticking instead with James Ennis and Mike Scott on the floor to close it out.

Is Brown worried about Horford yet? Not in the slightest, as far as he'll tell you.

"As good as he is, as long as he's played, what we all should be mindful of is just go back and look at his body of work and statistics that he's produced over a long period of time," Brown said. "He's a hell of a shooter and in the moment he's struggling making some shots, the worm will turn. I don't panic about that."

But you would have to be a fool to ignore what you're seeing so far, the confirmation of many offseason fears about how this project will come together. Will improved shooting change what has been an ill-fitting tandem in the frontcourt so far? Time will tell.