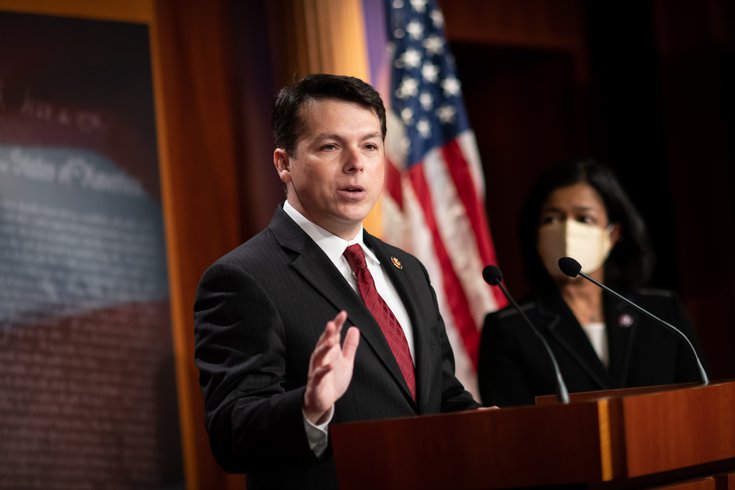 U.S. Rep. Brendan Boyle has no interest in seeing Ben Simmons play for the Sixers again.

The ongoing soap opera between the 76ers and Ben Simmons took another turn earlier this week when the disgruntled All-Star returned to Philadelphia, opening the possibility that he may be on the court for the season opener.

Some fans may be willing to welcome Simmons back to the team. His presence on the floor certainly makes the Sixers better and, if he plays well, Simmons could improve his trade stock and net the team a nice return package.

But many Sixers fans understandably have had enough of the Simmons experience and will be more than happy to never see him play for the team again. Count U.S. Rep. Brendan Boyle as a member of that club.

The four-term congressman took to Twitter on Tuesday night to share his displeasure over Simmons' potential return with a GIF of a well-known scene from "The Office."

In the scene, Michael Scott, played by Steve Carrell, explodes into a fit of rage when one of his least favorite co-workers, Toby Flenderson, unexpectedly returns after moving to Costa Rica and breaking his neck in a zip line accident.

This isn't the first time that the 44-year-old Boyle has used his Twitter account to take aim at the city's professional athletes and teams.

Last month, the Philly native tweeted that he never wanted to see Simmons play for the Sixers again. Last year, he jokingly suggested a law banning the Phillies' bullpen, whose performance was historically bad.

Other notable people also have taken aim at Simmons in recent weeks, including NBC10 meteorologist Glenn "Hurricane" Schwartz and Eugene Bozzi, the Philly native who famously captured an alligator with a recycling bin in Florida.

However, Kevin Hart recently came to Simmons' defense, saying that the team should better play to the 25-year-old's strengths.

While the former No. 1 overall pick appears to be rejoining the team, no clear resolution between Simmons and the Sixers appears in sight at this point. There will certainly be several more twists and turns to this saga before his fate is determined.

But one thing's for sure: Whenever, and with whomever, Simmons takes the floor again at the Wells Fargo Center, there's a pretty good chance he'll face a plethora of boos from the fans for the way his standoff with the franchise has played out.