Down North Pizza, Laser Wolf and Korshak Bagels were praised among 50 other spots around the U.S. 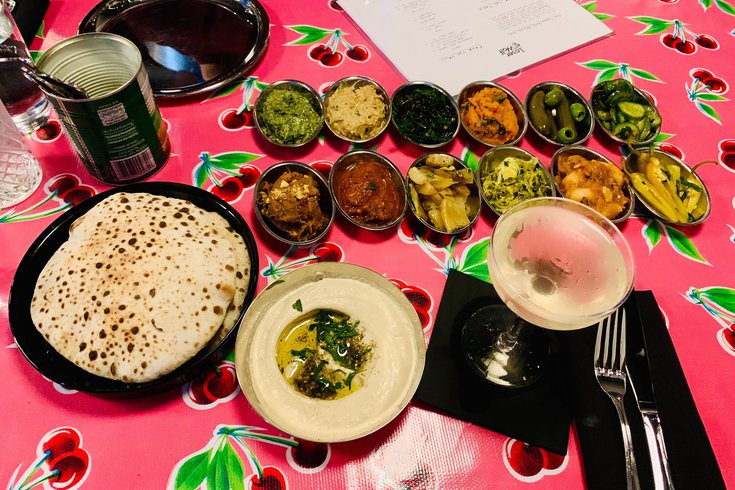 The New York Times wrote that 'few restaurants give as much flavorful bang for the buck' as Laser Wolf. Pictured above are salatim, hummus and pita, which is served with each meal at the restaurant.

Three Philadelphia restaurants – a Detroit-style pizza shop, an Israeli grill and an innovative bagel maker – are included in the list the New York Times compiled this week of "the 50 most vibrant and delicious restaurants in 2021."

Down North Pizza, Laser Wolf and Korshak Bagels were selected by food critics, reporters and editors who were tasked with finding restaurants around the United States that "reflect the rich mosaic of American dining."

In addition to its thick-crust, rectangular Detroit-style pies, Down North Pizza was lauded for its efforts to exclusively employ formerly incarcerated people .

"A mission like Down North's – to provide gainful employment for the formerly incarcerated – would normally be enough to land a restaurant on any number of laudatory lists. But the pizza (Detroit-style, delicious and well worth the trip beyond Philadelphia's Center City) is why it deserves a place on this list. Take the pie called Uptown Vibes: Pungent red peppers and red onions dot the sauce, a perfect complement to earthy kale and mushrooms, and the generous serving size will feed one person for days."

Down North Pizza opened earlier this year, at 2804 W. Lehigh Ave. in Strawberry Mansion. The restaurant also serves wings, fries and shakes. All pizzas must be ordered in advance.

The Times writes that "few restaurants give as much flavorful bang for the buck" as Laser Wolf. The publication praised the restaurant's owners, Michael Solomonov and Steve Cook, and its Israeli cuisine – specifically its salatim, grilled skewers and barbecue-style lamb with pita bread and pickled cabbage.

"Any restaurateur of a certain pedigree will say that the longer a place is around, the harder it is to keep up with the tastes of the restaurant-going public. Laser Wolf is a rare exception. Philadelphians of all ages are obsessed with this restaurant from Mike Solomonov and Steve Cook (their eighth project) and its fantastic array of meze-like salatim (schug with sweet pineapple and bitter celery, creamy kale baba ghanouj) and hearty grilled skewers. There's also a new entree, lamb served barbecue-style with pita fresh from the oven and two kinds of pickled cabbage. Few restaurants give as much flavorful bang for the buck, and what's more exciting than that?"

Laser Wolf opened in early 2020, at 1301 N. Howard St. in Old Kennington, just before the onset of the COVID-19 pandemic, in a remodeled warehouse. The name of the latest addition to the CookNSolo empire in Philadelphia is derived from Lazar Wolf, the butcher from the musical "Fiddler on the Roof."

Led by chef Andrew Henshaw, who came to Laser Wolf after working for five years at Zahav, the grill house prepares its meat, fish and veggies on skewers over charcoal. The restaurant's hummus and salads are worth the visit too.

Korshak Bagels is "like culinary poetry," the Times writes – explaining that owner Philip Korshak is a poet, himself – with "pillowy-soft" bagels and cream cheese made with goat's milk and mozzarella rind.

"Anyone who has ever enjoyed a New York bagel tends to go in search of that doughy delight even when far from the city. Korshak Bagels will make you crave a Philly bagel, which in this case means a pillowy-soft, sourdough bagel with a healthy schmear of cream cheese made with mozzarella rind and goat's milk. If this sounds like culinary poetry, that's because the bagels' maker, Philip Korshak, is himself a poet who believes that 'the love and respect for the bagels will feed our hearts.'"

Korshak has been making bagels since 2003, but he opened his own shop, at 1700 S. 10th St., in South Philly's East Passyunk neighborhood in May. His crispy bagels are made with a natural, wild yeast fermented starter and go through a 48-hour slow-rise process. The bagels are briefly boiled and then baked in a deck oven, part of the time on soaked cedar planks while wrapped in burlap.

Korshak Bagels' website describes its doughy creations as not New York-style bagels and not Montreal-style bagels, but rather a unique style of their own.

With three restaurants on the list, Philadelphia was in a three-way tie with Seattle and San Francisco for the city with the second most places included by the Times. New York City had the most with five restaurants.