The national chain has a new menu item, but there's no way it's better than these rectangular pies found across Philly 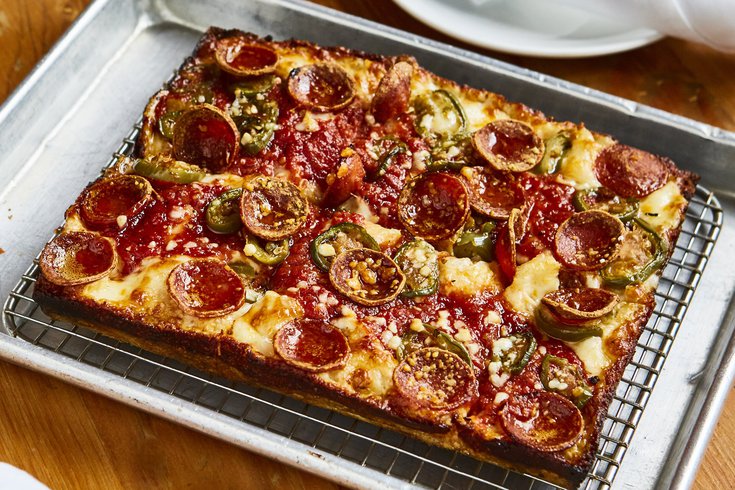 Typical Detroit-style pizza is rectangular with a thick crust, cheese and tomato sauce. Pictured above is a pizza from Emmy Squared in the Queen Village neighborhood of South Philly.

The chain said it spent more than a year developing its Detroit-style pizzas, trying out more than 500 iterations and creating a new tomato sauce.

That ... seems like a lot of work. But it might be a step in the right direction to gain new customers and keep people talking about the brand.

As far as I can tell, he's right that it's not a regional novelty, because here in Philly we have plenty of delicious Detroit-style pies – and those places deserve some recognition.

Sure, sometimes you have a Pizza Hut craving and nothing else will do. Plus, people seem to like the new Detroit-style.

However, there are other, arguably much better, options out there and you deserve to know about them.

Before jumping into this list of where to get Detroit-style pizza in Philadelphia, let's establish some ground rules. Some of these places clearly describe their style as Detroit. Others don't put a true label on it, but these restaurants are included because their pies fit the description of a rectangular pizza with a thick crust that's both crispy and chewy, and the cheese, toppings and sauce reach to the edges.

In my opinion, all the pizza options below are good even if they're not perfectly pure Detroit-style, so don't overthink it.

Owners of Down North Pizza in Strawberry Mansion call their restaurant a pizza pop-up with a mission. The restaurant hires formerly incarcerated people, giving them opportunities at culinary careers and to earn fair wages. Pizzas must be ordered in advance.

Down North's weekly menu is posted on Tuesdays and pre-ordering starts Wednesdays at noon for pick ups that are scheduled for Friday or Saturday. Quantities are limited.

When Emmy Squared opened a little more than a year ago in Queen Village, the Philadelphia restaurant was the Brooklyn-based pizza maker's fifth location – there are now eight in the U.S. The local shop's menu includes 17 varieties of Detroit-style pizza, among them the Tony Luke Jr., a nod to another South Philly food icon. It's a square pie, topped with broccoli rabe, roasted garlic, bacon, hot peppers and provolone.

Ordering from Pizza Jawn takes some planning, because you need to do it a week in advance. The first step is to follow them on Instagram. Pizza Jawn drops links to place orders there on Thursdays, Fridays and Saturdays. So pizzas ordered Thursday are ready to be picked up the following Thursday, for example. There are limited pizza reservations each day but the owners also will post impromptu availabilities to social media.

Circles + Squares is another pizza operation that grew into a brick-and-mortar location. The pizzeria was started by Dan Gutter, formerly of the Instagram-only pie maker Pizza Gutt, and now it is nearing two years selling its circle and Detroit-style pies from its Kensington shop.

You need to order your pizza in advance here, too. Around 4 p.m. each Monday, Circles + Squares reservation form for the week goes online. Customers select specific times to pick up their pizzas, and once all the time slots are filled, no pizza until next week. Note that Circles + Squares is cash only.

Square Pie was started by Brooklyn-born chef Gene Giuffi, who moved to Philadelphia two decades ago to manage his uncle's pizzeria. First he opened East Passyunk BYOB Cochon in 2007 before before Square Pie took over the space in 2015.

Square Pie's pizza has a thick crust and chef-inspired toppings. Officially, Giuffi calls his pizzas Brooklyn-style, not Detroit-style. Not saying that all square pies are the same, but if you're deciding between Pizza Hut and here, go local.

There also are options nearby Philly that offer Detroit-style pizza. Two noteworthy ones are listed below.

Delco has long been the land of Greek-stlye pizza – and that's a totally different list from this. But late last year, new pizzeria Crust introduced Detroit style with its Havertown location.

Owner Nick Haselidis says he was inspired by the pies made by Circles + Squares and the restaurant's website adds authenticity to its endeavor, noting its pies are topped with something called Wisconsin brick cheese and baked in a blue steel pan. The pan is a legitimate part of Detroit-style pizza history tracing back to the Motor City's automotive industry roots and steel utility trays commonly found in car factories.

If you're down the shore, you might not be far from Bakeria. It's about five miles inland from Ocean City and 12 miles south of Atlantic City. Bakeria's menu does not call their pizzas Detroit-style, rather "unique square pizza." The dough is risen using a sourdough starter from Naples, and pizzas come in 12 varieties.