Laser Wolf, the much-hyped followup to Zahav, set to open in Kensington 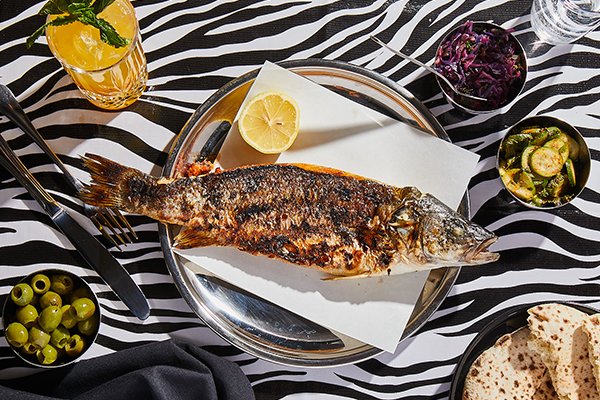 Laser Wolf, the newest Israeli restaurant from Michael Solomonov and Steve Cook, will open in Kensington on Thursday. The dining spot will offer charcoal-grilled cuisine, including Romanian beef kebabs and whole grilled Branzino.

Laser Wolf, located at 1301 N. Howard St. in Kensington, will feature an array of salads and charcoal-grilled skewers, including lamb merge, chicken shashlik and beef kebabs.

MORE: Federal Donuts' 'posy' bouquet is back for Valentine's Day

The restaurant, which draws its name from Lazar Wolf, the butcher in the musical "Fiddler on the Roof," is Solomonov and Cook's followup to Zahav, which was named the best restaurant in the United States last year by the James Beard Foundation.

The new dining spot has been receiving buzz since 2018, when Solomonov and Cook purchased the building, just two blocks from Front Street.

Andrew Henshaw will serve as executive chef. He previously served as the Chef de Cuisine at Zahav for five years and also led recipe testing for the Solomonov and Cook's best-selling "Israeli Soul" cookbook.

This Thursday February 6th, we are OPEN!! in Kensington at the corner of Thompson and Howard.🔥🌴 Book a table for dinner using the Reserve button on our page. You can also go to our website: laserwolfphilly.com. Or please just walk in for the bar!

Patrons can pair a grilled item from the dinner menu, which features everything from beef to fish to mushrooms, with one of 12 "salatim" salads. Among the salad options: kale babaganoush, sweet potato muhammara and dill and lentil tabbouleh. Hummus and pita accompany the salads.

The drink menu includes a rotating beer and wine list, as well as specialty Israeli cocktails, such as the Tel Aviv 75 – a gin cocktail with cardamom-lime and cava flavors. Pregnant or don’t drink? The restaurant has five “zero proof” drinks, including a baharat cherry iced tea or a passion fruit cooler.