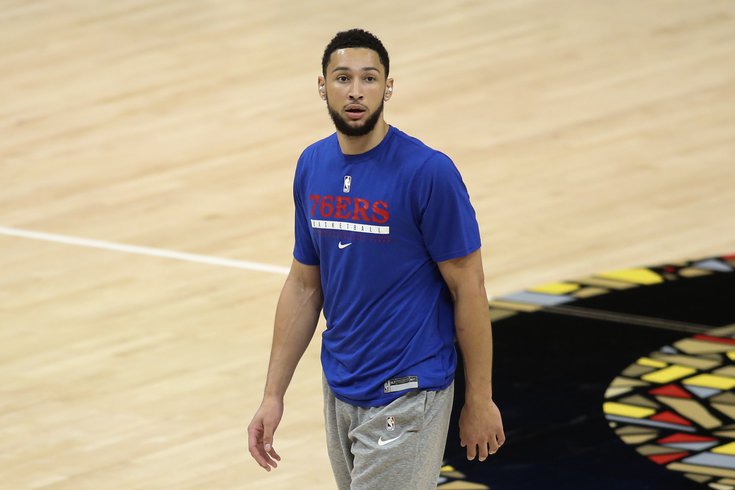 As a guest on the "All the Smoke" podcast, Kevin Hart defended 76ers holdout Ben Simmons, who has demanded a trade out of Philadelphia, hasn't shown up to training camp and is being fined for his refusal to rejoin the team.

Public sentiment in Philadelphia and across the NBA landscape has largely swung against Sixers holdout Ben Simmons, whose trade demand and decision to stay away from the team are easy to perceive as pretty weak, to put it mildly.

Simmons is a multiple-time All-Star and All-Defensive Team standout, but the circumstances surrounding his choice to bail with four years remaining on his contract don't pass the eye test for a multitude of reasons. Much of it seems to boil down to the 25-year-old growing sick of the environment and scrutiny in Philadelphia, or feeling unwilling to put his pride aside to mend fences with those in the organization who slighted him for his objectively timid postseason play on offense.

If it's true that Simmons and his camp believe the Sixers were "too good" for him to develop and refine his game in a less pressured situation, then he may as well be living on another planet.

Most young players with big egos would give anything to be able to earn a max contract from a win-now team that can credibly compete for a title, all the more so if that championship glory may ride on said player improving his own deficiencies to get over the hump.

Whatever Simmons' real reasons may be for demanding a fresh start in this manner, the whole saga is made worse by the tactical reality that Simmons won't come out and state it all clearly in his own words. It's in the hands of his handlers, unless he decides otherwise, and for the time being, we're left with the optics of a talented basketball player forgoing large sums of money to leave a top-seeded team that was on the doorstep of the Eastern Conference Finals.

For all the harsh criticism Simmons has taken from fans and former players like Shaquille O'Neil, Simmons does have an ally willing to publicly defend him in Kevin Hart. The Sixers superfan has dealt with his own share of backlash during his career as an actor and comedian. He's been on the wrong end of plenty of headlines.

Hart joined the "All The Smoke" podcast with Matt Barnes and Stephen Jackson this week and was asked about the Simmons situation.

"Ben Simmons is a f***ing star," Hart said. "Philadelphia, man, we're a different city. A friend of mine used to have this joke, where he was at a football game, and at halftime, the guy's got a frisbee and he's just throwing it. The dog is supposed to be catching the frisbee. Dog drops it a couple times, they start booing the f***ing dog. It's a dog!"

Hart's main point in defending Simmons is that he should be encouraged to play within his own style and strengths, using the tools that made him the top pick in the NBA Draft in 2016.

"Granted, this a three-shooting time in the NBA. That ain't Ben," Hart said. "He's not that guy. He's not that guy. Now, because of the media and how they, you know, position things – somehow we forgot about all the good that he did."

Hart said he's spoken to Simmons, but isn't going to put his business out there.

"Wherever he goes and ends up, Ben Simmons is a f***ing star – and whoever gets that god****, that f***ing potential, and that beast of a man, well, you're going to see the bang for your buck. I'm a Ben Simmons fan regardless, and I know the city of Philadelphia is very tough. We're hard on all. I just wish him the best and hope that wherever his next opportunity is, it's the right one for him."

Hart added that he's still bullish on the Sixers' chances with the duo of Joel Embiid and Tobias Harris, and he's eager to see who the team might add in an eventual Simmons trade.

With the Sixers' season opener against the Pelicans less than two weeks away on Oct. 20, the Ben Simmons drama will at least have to compete with actual basketball sooner than later.