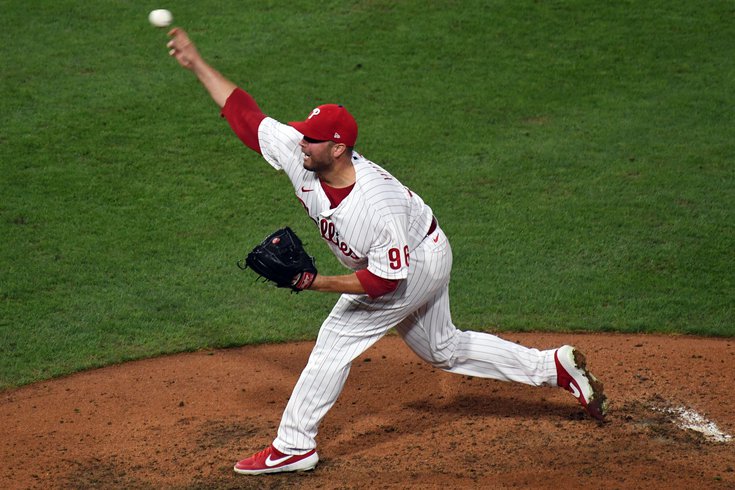 After the Phillies’ bullpen failed to hold onto leads again Tuesday night, this time against the Baltimore Orioles. U.S. Rep. Brendan Boyle jokingly tweeted that he would propose a law in Congress to ban the team's relief pitchers. Above is Tommy Hunter, who allowed two runs in one inning pitched during the 10-9 loss.

The Philadelphia Phillies’ bullpen has been nothing short of disappointing through 12 games of the shortened 2020 MLB season.

The team is 5-7 so far, and much of the Phillies’ struggles can be pointed to the inconsistency of their relief pitching. The starting rotation has been strong and the offense has held its own, but the bullpen has become a glaring weak spot for the Phillies.

The most recent episode of bad relief pitching happened at Citizens Bank Park on Tuesday night, when the Phillies’ bullpen coughed up seven runs on eight hits over five-plus innings in a 10-9 extra-inning loss to the Baltimore Orioles.

Not surprisingly, fans have just about had it and are frustrated with the Phillies’ bullpen mishaps. Among those annoyed fans is U.S. Rep. Brendan Boyle, a Democrat who represents North Philly, the city's River Wards and Northeast Philly in the 2nd Congressional District.

The three-term congressman tweeted after Tuesday's loss that he will introduce a bill that would ban the Phillies’ bullpen.

I’m introducing legislation in Congress to outlaw the @Phillies bullpen.

The Phillies’ bullpen pitchers rank last in MLB in ERA (9.87), WHIP (1.985), and batting average against (.362). When leading, the bullpen’s ERA balloons to 10.66.  There are 48 games remaining, and if the late-game pitching problems continue the Phillies will not contend National League East title.

Boyle is seeking his fourth term in the U.S. House. In November's election, he will run against Republican David Torres.