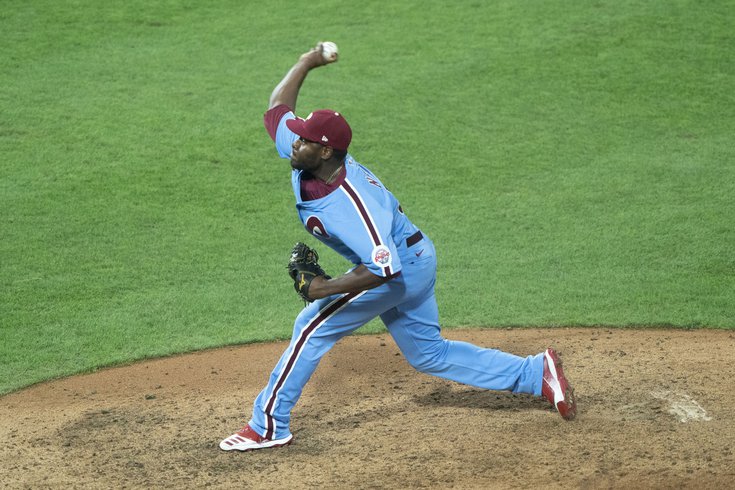 Hector Neris has been a rare bright spot in the Phillies bullpen.

Have you watched the Phillies this season?

You are forgiven if you haven't. Their season, well, all of baseball's season is off to quite the inauspicious start as the Phils missed an entire week of action due to the Marlins experiencing a COVID-19 outbreak in the visitors clubhouse at Citizens Bank Park.

But the team has now completed seven games — half of the rest of the majors (except for Miami and St. Louis... what a mess) — and has gone 3-4. Three of the four losses are because of the bullpen (with Aaron Nola responsible for their Opening Day loss).

• Loss 3: Jake Arrieta kept the Phillies in it before turning it over to the 'pen and Doelis Guerra, who couldn't get through his one inning of work without allowing three runs.

• Loss 4: Nola was incredible, striking out 12 in six innings in a seven-inning doubleheader game while allowing one run. The pen allowed a pair of runs and the Phils lost in the final frame.

The bullpen nearly blew a fourth game Thursday night, as a solid 5-2 lead in the seventh was cut to 5-4 after Nick Pivetta relented a pair of runs.

The sample size is small, but the names coming out of centerfield and entering the game for the Phillies every week are not exactly confidence-inspiring. Joe Girardi is trotting McLain (21 career innings and a 6.00 ERA prior to 2020), Guerra (a 4.67 ERA with four different teams), Kelley (who went 0-3 with an 8.64 ERA in one previous MLB season), Austin Davis (a 5.56 ERA in 48 appearances as a lefty specialist) and Irvin (on pace to allow 24 homers over a 162 game season) on to the mound and expecting them to succeed.

Will they settle down? Or is it simply a group of pitchers who are, well, not very good after Jose Alvarez, Adam Morgan and Hector Neris?

"I think it's really hard to judge our bullpen right now just because we haven't played in a week, eight days," Girardi told media members a few days ago when actions resumed. "Some of these guys haven't worked in eight or nine days. We try to get them as much work as we can, but it's still not game conditions. I think you have to give each guy three to four appearances to be fair to them with consistent work. You ask all relievers, they want consistent work. They don't want to sit for a week and then expect to go out there and have pinpoint control and have a good feel for their breaking ball and whatever other pitches they have. I think they need some consistent work before we really make a judgment."

That sounds like an excuse — but perhaps it is an apt one and they will settle down. With numbers like these, you'd assume they have to:

Those numbers are in stark contrast. With the Braves next on the menu starting this weekend, the bullpen won't have much time to recover. It's premature to blame GM Matt Klentak for not addressing the bullpen during the offseason, but with numbers like these coming from a rag tag group or hurlers it's hard not to wonder how the front office didn't see this coming. Hopefully it's simply a matter of getting more reps.

“Are we going to figure it out? Yes. I’m not at all worried,” Tommy Hunter, who allowed two runs without recording an out on Wednesday, said. “If you get off to a bad start in a 60-game season, it sucks. We haven’t pitched well — I haven’t pitched well — out of the bullpen. There’s been bright, shining stars and there’s been pretty bad moments. It’s early in baseball.”

The playoff field was expanded at the last minute, making the Phillies' margin for error a little bigger. But if they do fall just short of making the eight-team field in the NL, it will be hard not to blame the bullpen.