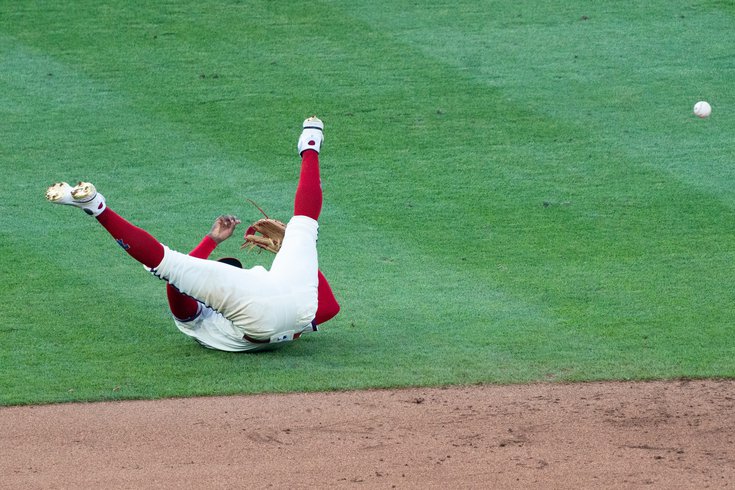 The Phillies underachieved in their first series of 2020.

The 2020 baseball season was originally set to span just 60 games, giving each game 2.7 times the impact of a game in a typical 162 game season.

Thanks to a ridiculous series of events, the Phillies have had seven games postponed or cancelled due to COVID-19 testing and an outbreak from their opening day opponent the Marlins. This only makes each game more important, as they'll likely complete even less total games as they attempt to make the playoffs for the first time since 2011.

And so, with three games in the book (two of them losses), the Phillies have played at least 5% of their entire slate — and likely more. Even with the abridged schedule, it's still way early to panic about their play on the field. We are pretty sure the following five stats we've singled out will change drastically — assuming the season continues — over the next few months.

The team is scheduled to finally hit the field again Monday against the Yankees with Jake Arrieta on the mound. Before they do, here are five interesting stats that explain what happened in the Phils' first trio of regular season games:

The Phillies sport the third worst team ERA of all 30 teams so far — with their 6.17 bullpen ERA also the fifth worst. It's troubling for a number of reasons. First, their top two starters pitched in the first three games (plus Vince Velasquez, who may be out of a job if he doesn't turn it around extremely quickly). Nola was just mediocre in the opener, but Wheeler was the pitching staff's lone bright spot as he earned an impressive win in Game No. 2. Without the solid debut from the $118 million man the Phils would no doubt have the worst ERA in baseball.

Second, this is probably the healthiest the team will be, and with a full compliment of bullpen arms, the relief work was positively awful. Joe Girardi can only hope it was rust. And third, the Marlins are awful (and were already playing without key players testing positive for COVID-19). The Phillies have very few games against sub .500 teams from last year and need to make short work of them when they can. Philly hurlers allowed Miami hitters to hit at a .286 rate (which would have been the worst BAA in MLB back in 2019).

The Phillies hit .136 with runners in scoring position last week, mustering three hits and six RBI in 26 attempts. For contrast, 22 MLB teams hit over .200 with RISP, with 13 teams driving in at least 10 runs over the season's first weekend. Philly's pitching staff was bad, but the offense had ample opportunity to make up for it and they failed to do so. In 2019, the Phillies tied for 18th hitting .254 with runners in scoring position.

This is the batting averages for both Phil Gosselin and Adam Haseley, each of whom went 4-for-6 in the opening series. There is obviously no way this continues after such a small sample, but it is a good illustration of how Girardi should probably manage his team this season. Lending at bats to the hot hand and giving cold players a rest is clearly going to be the recipe for success — (as opposed to allowing players time to work out of slumps) if he can pull the right levers at the right times.

Phillies pitchers have gotten ahead of opposing (Marlins) hitters 37.7% of the time with an 0-2 count, the second highest rate of 0-2 counts in baseball. The Phillies have given up the second most hits on 0-2 counts, and as a whole have thrown strikes 65.9% of the time, a top 10 number in baseball. And yet, for whatever reason, their stuff has just not induced outs when the ball is in play. Is this just a small sample size issue that will correct itself? Or is the Phillies pitching staff hanging the ball over the plate?

The Phillies last year allowed 258 home runs to opposing hitters, the fifth worst number in the league. This year, once again playing in hitter-friendly Citizens Bank Park, the team is on pace to allow exactly 100 home runs, or 270 over a 162 game season. This is a recipe for failure. The Phils have the offense and the ballpark to dominate in the home run category, a stat that could help them make the expanded playoffs. Their six homers offensively through three games is a very high pace, one that would yield 120 homers on the year, or 324 during a regular season (17 more than 2019's season leaders, the Twins with 307).