Kevin Cooney: How the Phillies can succeed in this odd 2020 baseball season

Opening Day brings a sense of normalcy, but this season — like this entire year — will be anything but normal. 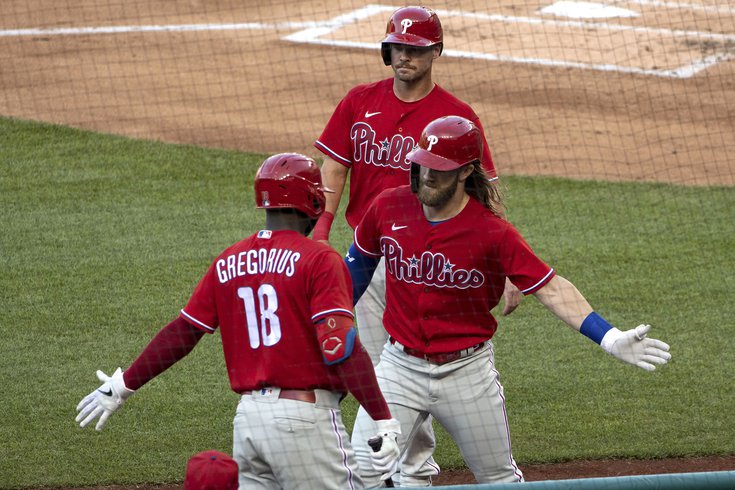 It won’t be a crisp April afternoon that greets them, walking in from the recesses of Ashburn Alley to the soaring red-and-powder blue clad masses bundled against the early spring chill, excited for the normal marathon grind.

Instead, it will be the blazing July heat and stifling humidity — the dog days that have too often signaled the end of the city’s interest in baseball as the football team heads to training camp — that awaits the Phillies on this “Opening Night.”

Instead of 46,000 fans screaming themselves hoarse between overpriced alcoholic beverages of choice after downing plenty of the cheap stuff in the parking lot, they will be greeted by the sounds of silence and the only noises coming from the construction vehicles of the casino being built down Darien Street from them.

Welcome to Phillies baseball 2020, everyone. Or in other words…

“(Bleeps) about to get weird.”

Seriously, how do you even project what this could possibly look like for the next two-plus months?

Could the addition of one big money pitcher (Zach Wheeler) and one veteran manager (Joe Girardi) turn baseball’s biggest 2019 disappointment into a sudden contender? Will a field that has been expanded to eight from five in the National League playoffs help pave the way for the first Red October in a generation?

Or will this franchise — devoid of real talent in the minors, filled with offensive underproduction and potholed by a wing-and-a-prayer bullpen — head down the same old path it has since that fateful Game 5 of the 2011 National League Division Series.

This is the great mystery of baseball life right now. Where in the world will this abnormal season take us? As we were reminded on Thursday, with Nationals outfielder Juan Soto’s failed test, there’s no guarantee that the Coronavirus will allow for a finish line to be crossed. A lot of what happened will – unfortunately — likely be decided by the testing results. Lose an ace pitcher for 14 days and a season can fade quickly. If your opponent has an illness or an injury, the opposite could be true. And the playoffs can develop into the ultimate crapshoot in a world of Best of 3 series.

If this Phillies team wants to dream about October, it will need two things: a starting rotation of Aaron Nola, Zach Wheeler and a third wheel – Spencer Howard, Jake Arrieta or Vince Velasquez — providing some stability and depth to avoid too much of a workload on a highly questionable bullpen.

The second is often overlooked: it needs consistent offense. The lineup has a ton of names — Andrew McCutchen, Jean Segura, Bryce Harper, J.T. Realmuto, Rhys Hoskins and now Didi Gregorius — that can go on explosive spurts. All of those guys have been able to piece together All-Star or MVP type resumes at one point or another.

The problem for Philadelphia has been getting everyone to fire at the same time. In 2019, Philadelphia was 22nd in batting average (.246), 22nd in homers (215), 19th in on-base percentage (.319), and tied for 17th in on base/slugging percentage (.746) with the Angels. There are times when numbers are deceptive, but the idea that this lineup — celebrated for its potential, limited in its execution — flailed so often last year was a result of a hitting philosophy by John Mallee that ended up with too many empty swings.

Joe Dillon comes over from the Nationals and it will be fascinating to see how much of a change has really taken place. The message could be similar, but the messaging – stressing a less mechanical style — could tap whatever is in the system. Having Scott Kingery at one spot — second base — may also benefit with stability. Plus, Philadelphia does have the luxury in this first designated hitter season with Jay Bruce as a primary option and the possibility of floating Hoskins, Realmuto, McCutchen and even Harper into that role if needed.

If the Phillies are going to be a playoff team, they will absolutely need to do it with offense. The starting pitching is better, but not sizeably enough to reduce the gap between them and the Nationals, Braves and Mets. (New York’s loss of Noah Syndergaard and the potential injury to Marcus Stroman does throw a ton of weight onto a highly touted Mets bullpen.)

The possibility is there for the Phillies to bash their way into this expanded October pile. In fact, they probably should. The manager is better and the roster appears better than last year’s .500 team. And while you can’t make any sweeping judgments based on this weird season, you can understand that failing to get into the top half of the National League should cause a serious bit of soul searching at 11th and Pattison about where they are as an organization.

On this day, however, it is great to be able to look around and feel a first sign of normalcy in months. It may not feel like an April Opening Day in any way. But just having the sport around beats the alternative.

And in this year from hell, you take the wins anyway that you get them.

Kevin hosts the “Working The Beat” podcast with Mike Kern, available on iTunes, Google Play and everywhere podcast are heard. A regular on WIP, Kevin loves to interact with readers on Twitter. Follow him there at @KevinCooney.