What they're saying: Who is the Phillies' most-likely trade chip? What might a Realmuto extension look like?

Plus, amid a flurry of roster moves by the Phils, baseball returned this weekend to very little fanfare 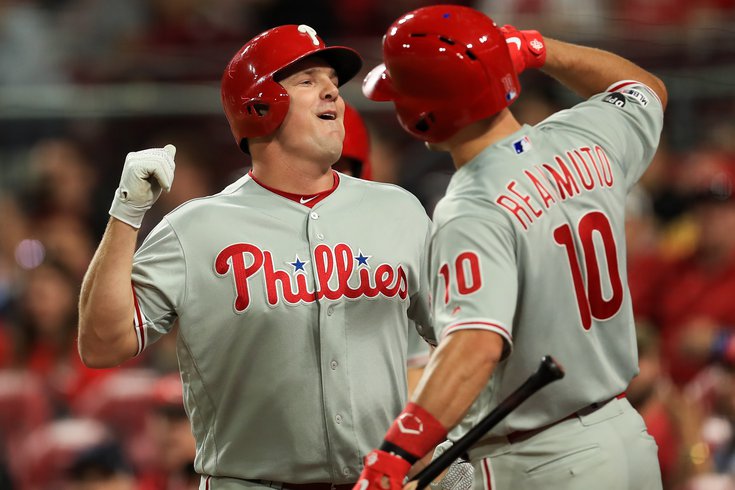 In case you missed it — and if you weren't paying close attention there's a good chance you did — the Phillies played their first exhibition game on Saturday night when they visited Max Scherzer and the Washington Nationals in D.C.

And the Phillies looked good in support of staff ace Aaron Nola, lighting up Scherzer for seven runs in two innings behind home runs from Bryce Harper and Didi Gregorius on their way to a 7-2 victory in their first of three exhibition games.

Unfortunately for Phillies fans, there was no way for them to watch the game. And given the near four-month delay to the start of their season, which has now been shortened to just 60 games, one would think that Major League Baseball would want to take advantage of televising as many games as possible, especially now, when none of the other four major American sports are currently playing games.

But, baseball is going to baseball.

That the Nationals and Phillies are playing the first bona fide exhibition game in big 4 US sports since the pandemic began, and it is not on TV, and it is not streaming, tells you everything you need to know about @MLB's acute lack of self-awareness.

The good news, however, is that the Phillies will be back on TV on Sunday and Monday nights for their final two exhibition games against the Orioles and Yankees, respectively, before they open the season on Friday at home against the Marlins.

With the clock ticking down toward the start of the actual season, let's take a look at what they're saying about the Phillies as the team prepares with some roster cuts ahead of Opening Day — and even some trade deadline and contract extension talk.

Since Saturday night's win over the Nationals wasn't on television, we figured it'd be a good idea to provide some commentary on what that first fan-less experience was like down at the ballpark. Here's some of what the Inquirer's Matt Breen saw in Washington as he took in a game that neither looked nor felt like an actual professional baseball game — and one that likely won't look much different when the games start to matter at the end of the week.

The game was the first major-league exhibition since summer camp resumed, yet it was not on TV. With fans barred, the Nationals covered some outfield seats with advertisements and constructed tents over the first rows of three sections in the lower bowl. The tents are overflow dugouts to allow for social-distancing if the regular dugouts are too crowded.

They played “Take Me Out to the Ball Game” but did not have their traditional race of former presidents. They pumped in fake crowd noise and added reactions, but the canned noise seemed to cheer as Harper’s homer traveled to right-center against Scherzer.

Maybe Nola isn’t the only one to figure out some of the newness of a strange season before it begins later this week.

“I think all of us are wondering what it’s going to be like game three, game four, game 10, game 20 without fans in the stands,” Girardi said. “I think players use fans for energy, but there was a different feel tonight, which made me feel better about what we’re doing.”

“Everything feels a little bit different, but I think everyone learns how to adapt and it becomes normal again, in a sense.”  [inquirer.com]

With MLB's COVID-shortened season, the trade deadline will be upon us before we know it. In fact, it's happening just 39 days after Opening Day this season — and typically, about a month before the deadline is when trade talk really starts to heat up. Interestingly enough, while the deadline will pass much earlier in the year than in a normal season, it will also be happening much later in the season too (yes, that makes sense) as there will be just under a month between the deadline and the start of the postseason.

In other words, it's not too early to start thinking about potential deadline moves, even if we don't know yet who will be buyers and who will be sellers — or even if there will be a lot of movement in this odd year.

Over at MLB.com, Mark Feinsand took a look at one likely trade candidate from each team, and the name that popped up for the Phillies was an interesting one, especially since most people have him penciled in as the team's designated hitter on most nights this season.

The addition of the DH to the National League should mean more at-bats for Bruce, whose power has long been his best attribute. Playing in the final year of his three-year, $39 million deal, Bruce will earn a prorated $5.18 million during the shortened season, most of which will be paid by the Mariners as part of last year’s trade. He’s one of several impending free agents along with Didi Gregorius and J.T. Realmuto, though without a clear starting spot, Bruce might become a trade chip if the Phillies are in need of an arm for the pennant race.  [mlb.com]

How much for Realmuto?

There's been a lot of talk recently about J.T. Realmuto's status with the Phillies and whether or not the team will re-sign the best catcher in baseball or let him test the free agency waters when his contract expires at the end of the season.

Over at The Good Phight, newcomer Stephen Souden took a look at not if the Phillies will re-sign their All-Star catcher, but what that contract might look like, and whether or not the team can expect Realmuto to live up to that deal. It's a very in-depth piece with tons of analysis, so we obviously couldn't put it all in here, but here's the premise of his piece...

J.T. Realmuto, by most metrics, is regarded as the best all-around catcher in baseball heading into the 2020 season. It is for this reason that the Phillies would be short-sighted to simply let him hit the open market, especially after giving up so much to acquire him just last February. He has one year of club control remaining before he is eligible for free agency, making this season the final opportunity to reach a long-term agreement.

So, what does a potential J.T. Realmuto extension look like? ...

In terms of average annual value, I see Realmuto setting the record. [Joe] Mauer’s AAV of $23 million per year was set in 2011. Realmuto will be signing his deal almost a decade later, and due to ever-shifting markets, will likely be worth more than $23 million per season by 2021 market standards. Judging by these conditions, a theoretical 6 year/~$150 million contract ($25 million per year) does not sound too far off.

The next question is, how will J.T. Realmuto progress into his thirties? The answer to this one is much less clear. By and large, predicting human performance is a daunting task. Various modeling practices yield promising results, but sometimes it is simply a crapshoot trying to estimate how good a player is going to be across a six-year span. Regardless of inevitable biases and imperfections, here is my attempt to pinpoint exactly how J.T. Realmuto will produce during a potential contract extension period.  [thegoodphight.com]

The Phillies made a slew of moves this weekend, including releasing a pair of veteran players in Logan Forsythe and Francisco Liriano. Additionally, reliever Victor Arano was optioned to Lehigh Valley and catcher Henri Lartigue was removed from the Phillies 60-man player pool.

On top of that, the team told infielder Neil Walker that he will indeed make the team as one of their likely five bench players.

According to NBC Sports Philly's Corey Seidman, the biggest surprise among those moves was Liriano.

The most unexpected move was the release of Liriano, who looked to be on track to join a shaky Phillies bullpen. The only real bullpen locks on this team are Hector Neris, Jose Alvarez and Adam Morgan, and Liriano is a lefty with a track record of limiting lefties, so this was surprising.

Asked about that move Saturday night, Phillies manager Joe Girardi mentioned liking the stable of lefties in the bullpen.

“Liriano had a pretty good spring training," he said. "He’s had a long career and can still help someone but we might go with a little more youth.”  [nbcsports.com]

Bart Braun, a longtime scout and front office executive currently serving as special assistant to the general manager for the Phillies, passed away suddenly on Friday, the team announced. Over at The Athletic, Matt Gelb spoke to several members of the baseball community who knew Braun and asked them to share their favorite stories. It's clear he was a man whose life revolved around baseball, and was someone respected by all those he came in contact with.

Braun died Friday. He was 64. He devoted 44 of his years to baseball. For the last 37 years, he was a scout. His job put him on the road, sometimes for more than 300 nights a year. Braun collected countless stories because he was willing to go wherever, whenever to see a player. No matter what trend pulled baseball in a new direction, a team found value in Braun’s opinion.

“He’s the best evaluator I’ve ever been around in 31 years in the game,” Phillies assistant general manager Scott Proefrock said. “I’ve known him for 31 years and I had more damn fun than the law allowed being around that guy for that period of time.”

“Bart was not afraid to make a mistake,” Hall of Fame executive Pat Gillick said. “If you’re in scouting, if you’re afraid to make a mistake, you’re in trouble. He always put his evaluation forward. He always put his thoughts forward. You knew what was on his mind. There wasn’t anything hidden when Bart was talking about a player and evaluating a player.”

“There were a lot of people throughout our game laughing today and crying today and talking about Bart and telling stories,” Twins manager Rocco Baldelli said. “They are endless.”  [theathletic.com]