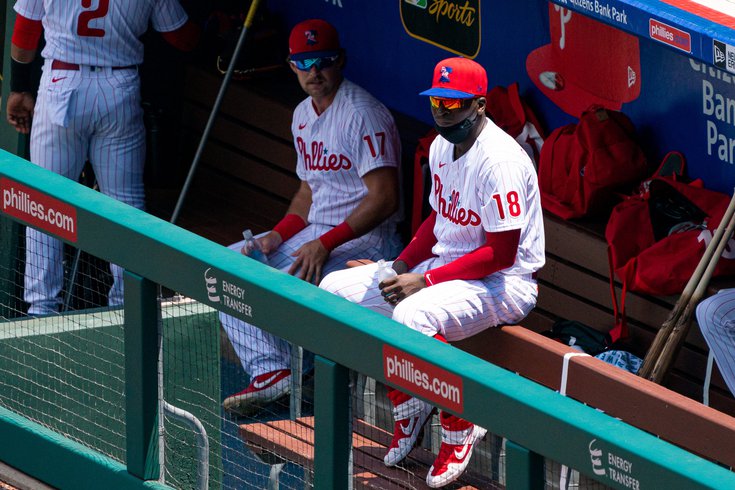 How many players will be needed to complete the 60-game regular season?

If you're a baseball fan you already know full well that 2020 (if it happens and finishes) will be absolutely wild.

And with teams playing in their home ballparks and traveling fairly frequently, as opposed to the NBA and NHL putting players in a controlled bubble, there will likely be some mini-COVID-19 outbreaks this season. Positive tests are inevitable, and as they arise, players will need to miss at least two weeks at a time.

The Phillies have been bit by the bug already but luckily most of their coronavirus-related absences are over and the full team is practicing with the regular season just a week away.

There also exists a higher probability that players get hurt early in the season with such a short ramp up period. As opposed to having a month of practice games, the Phillies will have had about a week and a half of intra-squad games plus three exhibitions. It's a recipe for soft tissue injuries.With so much uncertainty, Joe Girardi will need a backup plan.

Rosters will start at 30, and decrease to 28 and 26 in two-week increments. The team will be able to draw players from a 60-man roster pool which can be tinkered with as players are put on the IL or COVID list. The Phillies will need a backup plan — or two — or nine — for the 60-game 2020 season. Here's a preliminary look at what they could be:

Losing Realmuto for any extended period of time would be a nightmare. Grullon is an extremely talented prospect who could take the backup job from Knapp at some point, but has minimal MLB experience. Bethancourt was a non-roster invitee to spring training who is not in the 60-man pool — but could be added for catching depth. He has hit .222 in 469 career at bats. If there was any more evidence needed that Realmuto's re-signing was of utmost importance, looking at the catching depth provides a pretty convincing one.

If something happened to Hoskins, the Phillies likely wouldn't appoint a full-time first baseman. With such a short season and so many bats looking to get opportunities, Girardi might go with a matchup-based approach giving players like Realmuto, Jay Bruce or some bench pieces starts at first. The team could also call on top prospect Alec Bohm, who's first position is third base but is arguably a better defender at first.

This one came close to actually happening, and might be called into action to start the year. Kingery tested positive for COVID and dealt with the illness just a few weeks ago. He is back in summer camp now but is a bit behind his peers, prompting the possibility he may miss a few starts to begin the year. If so, the Phillies are likely to start one of their infield veterans. The team could also move Jean Segura to second base and plug top prospect Alec Bohm in at third. As you're about to see, they should have plenty of options in the infield.

The good news about the Phillies starting infield is that there are multiple players who can play multiple positions. So, say Gregorius is out with some kind of injury for an extended period of time. The team could theoretically call up Bohm to play third base, and move Kingery from third to short. They also could start one of their veteran bench infielders. A third option exists for them too. Gamboa is a prospect who is not on the 60-man roster right now, but is on the 40-man roster. The 40-man is still operating as usual this season, and the Phillies could eventually be facing the need to make room on it if they go through enough players. Booting someone from the 40-man roster would require that player to pass through waivers, something Gamboa would not do. Which means they may need to play him at some point. If things go south this season, there may be an opportunity for the 22-year-old to get some playing time in the majors.

This one is pretty simple. Bohm is the top prospect in the Phillies farm system. He is the top third base prospect in all of baseball. If a third base opening — or even an infield opening that requires some shuffling (Segura can play short and second) — Bohm will likely get his chance.

The bats behind former MVP's Harper and McCutchen are really not dazzling. Bruce has pop and would be the next man up, but probably isn't solid enough in the field to be a regular, every day outfielder. He also will be the preferred DH against right-handed pitchers. The Phils have some talent behind them in Garlick, who is likely to miss the 30-man roster and Williams, who has a minor league option left and will start the season with the "taxi squad" in Lehigh Valley. The Phillies could also slide one of their centerfielders — Adam Haseley or Roman Quinn — into left or right if needed.

The Phillies are lucky to have two centerfielders who, while relatively unproven in the big leagues, are each capable of starting 60 games if healthy. If for some reason the Phillies go through both, they have two aspiring outfielders in Mahtook and Martini who could fill in short term. If the team really wants to shake things up, they also could give former No. 1 overall pick Moniak a chance.

There's really no point in providing the backup plans for the bullpen, as the team will have more than 30 pitchers to draw from during the season if need be. It will more than likely be a revolving door of relievers. However, there will also likely be more than five starters used this season.

Phillies pitching coach Bryan Price says the team will carry around 16 pitchers on their 30-man Opening Day roster. About 12-14 pitchers in camp will be stretched out to compete as relievers and secondary starters if they don't make the team.

In an earlier interview, Girardi hinted that he might have some kind of "shadow pitching staff" ready to go, with a hurler shadowing each big league starter in Lehigh Valley, throwing full bullpen sessions every five days in case one is needed. We have no way of knowing for sure right now which of the 12-14 starters alluded to will be the next one called up, but if we draw on four hurlers who got experience last season (in Pivetta, Suarez, Irvin, and De Los Santos), plus the team's top pitching prospect (Howard) who is on the 60-man and expected to make his debut this season at some point, we get a general picture.

Starting pitching will be a key element this season, and it's likely that keeping their top three or four guys healthy could be the ingredient that propels them to the playoffs.