Kevin Cooney: Phillies finally have an adult in the room with Joe Girardi 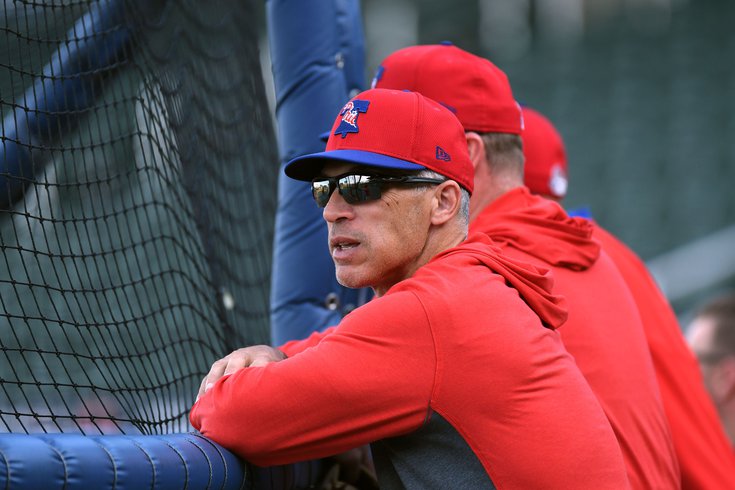 Judging by the Zoom calls that he is doing with the media these days — and for the foreseeable future, that’s all we’re going to have to go by in judgment — Joe Girardi hasn’t really unpacked things in his Citizens Bank Park office to make it fully home.

This isn’t Gabe Kapler, who believes that pictures of Gandhi and Einstein on the wall would translate into some sort of a baseball culture. (Breaking news: It didn’t.)

The only thing that has been visible in Girardi’s Zoom calls have been empty shelves hanging near the ceiling that are awaiting its contents as a season goes along.

The symbolism is in the actions. One guy wanted to play a manager. The other one is too busy being one to worry about what to put on the walls.

In this most abnormal of years with no guarantee that the Major League Baseball season can even finish the 60-game “fun run” of a schedule, the one thing that Phillies fans should hold onto is the fact that their manager has as good a grasp on a situation that will easily get away from most skippers.

Players checking in and out with COVID-19 or testing flaws? A starting rotation that will likely only see five innings for most games? Juggling how a lineup should be handled with the extra bonus of a designated hitter in play for a roster not designed for it?

The bet here is that Girardi gives the Phillies an advantage in at least trying to weather the tide should the entire year not get washed away. While nobody has ever really dealt with a season quite like this, there are not many people who have dealt with the bizarre situations like Girardi which he saw in New York as manager of the Yankees.

Think back to everything that happened in Girardi’s managerial career with the Yankees:

• Replacing a Hall of Fame manager in Joe Torre.

• Closing down Yankee Stadium I and moving into the bandbox next door.

• The death of George Steinbrenner.

• The A-Rod suspension and return.

• The retirements of Derek Jeter and Mariano Rivera — complete with year-long farewell tours that could be as disruptive as anything in sports.

• Taking a ton of young players as the Yankees transitioned to a new generation and getting them into Game 7 of the American League Championship Series in 2017.

That’s a lot of things that have happened and yet Girardi never let the Yanks crack. There may have been years without playoffs — four out of 10 seasons, but three of them had major transitions or injuries involved (2013, 2014, 2016) and the lowest win total he had in that entire time was 84 wins. (Girardi’s only under .500 year was his first managerial job — a 78-win season with the Florida Marlins in 2006.)

Players, managers and team executives shouldn’t be judged by the most unusual circumstances — games without spectators in multiple cities with multiple nose poking’s in a week in a sport designed for large crowds, a 60-game schedule that goes against everything the sport has practiced for the last 151 years — that a professional sports league has ever attempted to play through.

So, you are going to end up with Matt Klentak as the Phillies general manager in 2021 whether the club goes 55-5 or 10-50. Don’t expect to see movement of a lot of players, either, even if J.T. Realmuto’s contract status is up in the air. (The amount of bidders is going to be dramatically reduced with no cash coming into team coffers this season.)

There is one thing, however, you will be able to take and hold onto and that will be Girardi’s managerial ability. If the Phillies are anywhere close to a playoff spot with all of the questions they have — shaky starting pitching, a bullpen that’s temperamental and the uncertainty of a pandemic — it is because they have an actual adult in the dugout who knows what the hell he’s doing.

You can probably put that on a stack of empty shelves and take some solid comfort in it.

Kevin hosts the “Working The Beat” podcast with Mike Kern, available on iTunes, Google Play and everywhere podcast are heard. A regular on WIP, Kevin loves to interact with readers on Twitter. Follow him there at @KevinCooney.