What they're saying: Should we be optimistic or cynical about Phillies, upcoming baseball season? 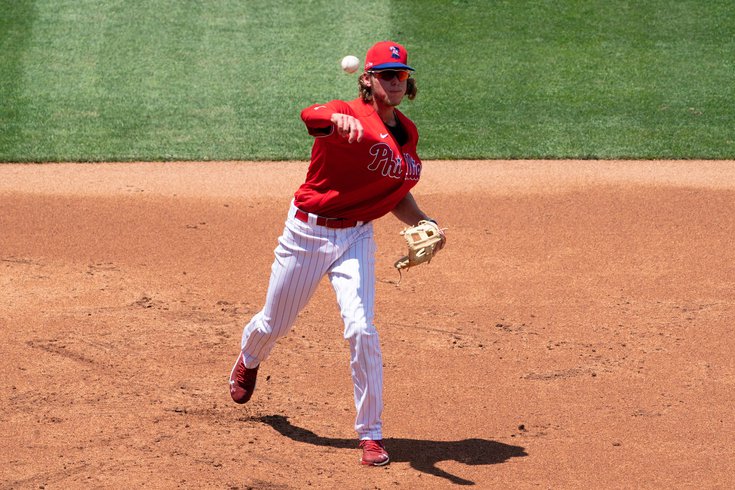 Will Alec Bohm be on the Phillies Opening Day roster?

Like everything else in life, the fast approaching 60-game baseball season can at times seem like an incredible gift, and others seem like an irresponsible waste of time.

And depending on who you ask, there are a great many people in and around the game who are incredibly optimistic and enthused to play or watch what was once America's National Pasttime, and some who are already defeated, pessimistic and mitigating its possible value.

That's the frame we'll take here with our latest "what they're saying about the Phillies," as we offer you some takes and pieces of news that frame the upcoming season in one of those two major boxes.

We'll start on a lighter, positive note on a player for whom there has been much worry over the last week. With J.T. Realmuto, arguably the game's best catcher, looking more and more likely to become an unrestricted free agent at season's end, many are forgetting that he has an entire (albeit 60-game season) ahead with the Phillies. According to Baumann, who compiled a roster of players who are "must watch" for his All-MLB.TV team, Realmuto is the no-brainer catcher for his line up.

A star player in a contract year for a high-variance club is compelling enough, but Realmuto has stated his intention to play every single game this year, which is unheard of for a catcher. Realmuto logged more innings behind the plate last year than any catcher in baseball, and with just 60 games on the schedule, he figures he can still play first base or DH on days when he doesn’t catch. It’s not out of character for catchers with some offensive ability to moonlight as first basemen—Yasmani Grandal made 16 starts at first last year and appeared in 153 games total—but having a catcher appear in literally every single game would be a stunning development.  [The Ringer]

Jake Arrieta hasn't really been in the news much locally of late, especially not since the healthy return of Aaron Nola to Phillies camp firmed up the rotation. But the one-time Cy Young award-winning starter has a player option coming up and could be a free agent like Realmuto in a few short months. In a conversation with media members, Arrieta said he believes the safety protocols the league is implementing will work, and that this season — during these strange times — could be the opportunity to do "something special."

What a nice slice of optimism.

Arrieta, too is feeling okay about his chances of landing a decent contract for his next gig this coming winter.

The shutdown has hurt the sport’s revenues and that could soften the market for players like Arrieta next winter.

For now, Arrieta is not concerned about that.

“If you look at (Kansas City Chiefs’ quarterback Patrick) Mahomes’ deal, it shows that sports, and baseball is no different, will generate a tremendous amount of revenue regardless of what’s going on right now. We’ve seen certain TV deals be signed. Every free-agent class has obstacles. We can’t predict the future.

“We just have to play it out and see. There will be a lot of guys in the same boat as I am. I’ll handle that when time approaches.  [NBCSP]

Andrew McCutchen was another big name Phils' player who spoke publicly this weekend, and the layoff has certainly helped the outfielder as he seems healthy and ready to go after tearing his ACL last summer. But that wasn't the biggest topic of discussion. Cutch is both the clubhouse leader and an African American, and racial issues have dominated the headlines during the four-month baseball hiatus. The former MVP co-wrote a USA Today story documenting his feelings about the George Floyd killing. Will McCutchen make some kind of statement on the field this season?

McCutchen said he will not take a knee during the anthem on Opening Day, but it would not be a surprise if other players did. Players have hinted or said that they plan to use their platform to promote Black Lives Matter and the movement.

“I think we all understand -- we should by now understand -- what the knee means, people who do take a knee,” McCutchen said. “People are going to feel the way they feel about it. For me personally, it’s not something I’m going to do or partake in. At the same time, anyone who does that, they have my support. If they feel like they should protest, that is what they’ll do. That's not something I plan on doing.”  [MLB.com]

Okay, so you're feeling a little better about things now, no doubt. It's time to hit you with some pessimism. It really seems like a no-brainer that top offensive prospect, Alec Bohm, and top pitching prospect, Spencer Howard, make the 30-man roster. Each is in big-league camp currently and is clearly talented enough to make an impact. Both 23-year-olds were expected to break through sometime in 2020 anyway.

But as laid out in recent a mailbag from The Athletic's Megan Montemurro, it's unfortunately not that simple.

Service time still plays into roster decisions, even in a shortened season. The collective bargaining agreement expires after the 2021 season, and who knows what team control and free agency might look like after that, so organizations maintaining team control of their best young players remains an important development strategy. It seems likely that Howard and Bohm, the Phillies’ top two prospects, start the year at the satellite camp in Allentown for roughly a week to work around the service time issue. Perhaps the Phillies consider adding Howard to the 30-man roster and having him make his big-league debut during their third series of the season against the Blue Jays or right after that series, when an off day could allow the team to reconfigure its rotation. As for Bohm, Girardi was asked about the third baseman Thursday and said the Phillies see the 23-year-old as a possible contributor this season. Girardi mentioned how Bohm hits the ball to all parts of the field and grinds out at-bats. “I think he’s interesting,” Girardi said. “We’ll just continue to watch him in this spring training and how he’s progressing. But I think at some point, he’s going to help us.” As of now, I would be surprised if Bohm starts the season with the Phillies.  [The Athletic]

Is it really worth it?

And finally, a dose of reality from Murphy, who wrote a column contemplating what the true value and virtue is of staging a mundane 60-game season that will likely be missing many of the sport's biggest stars during the most dangerous time to be alive in the last century in America.

He ponders a question all of us have toiled with at one point or another as we've all waited for sports to return: Is it worth it?

In the actual world that baseball has chosen for itself, the heightened importance of each of Wheeler’s 12 projected starts is now mitigated by the suspicion that they might not mean anything. Last week, Girardi sounded optimistic that the length of any absence would be closer to the usual three-day paternity leave that players typically take. But even if that proves to be the case in September, what matters most right now for baseball is the perceived legitimacy of its season. From the pandemic to the George Floyd protests to the daily political circus, the last four months have required an unprecedented divestment of emotional energy from the same Americans whom baseball is counting on to invest emotional energy in its sport. If viewers’ supply of energy is as limited as I suspect it to be, baseball was always going to face a herculean task in siphoning off some portion of it while also contending with the NBA, NFL training camp, and the 2020 presidential campaign. Now, with 11 days to go, managers still aren’t sure how many of their players will be participating. Players still aren’t sure that they’ll get their test results in time to participate in a given day’s workout. So how can a fan be sure that the upcoming season will be worth treating seriously?  [Inquirer.com]