But the team's top two prospects shouldn't have to wait long for their MLB debuts... 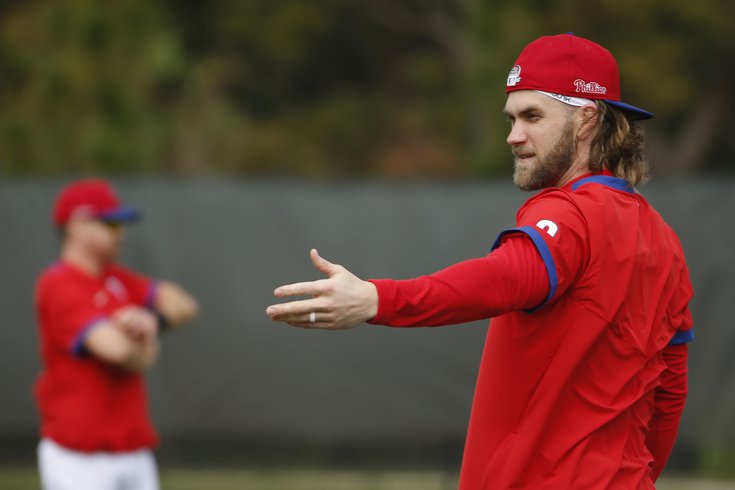 Back in March, before the world was upended by coronavirus, hearing an article about the Phillies start with the phrase "Bryce Harper said while playing Fortnite on Twitch..." would be pretty unusual.

But it seems like the new normal and so here we go.

Bryce Harper said, while playing Fortnite on Twitch, that "If Spencer Howard isn't starting in our rotation by Game 6 in New York against the Yankees, there's a problem. That's all I'm saying."

In his short one-plus year as a Phillie, the MVP outfielder has wasted no time in not only becoming the face of the franchise but also the player with the most interest and most invested in the future success of the team.

Harper, after all, signed a contract keeping him in Philadelphia through 2032, when he will be 38 years old.

"You get that feeling that he knows he's going to be here for a while and he knows how important it is for the guys coming up through the organization to have success," top prospect Alec Bohm said to media members Friday. "He has been very welcoming and lends a helping hand wherever he can."

That helping hand, at least publicly, has been trying to wield his enormous influence over the Phillies front office. A few weeks ago, as summer training started up in South Philly, Harper was seen wearing Realmuto swag and yelling "sign him," after the soon-to-be free agent slugged a dinger in a practice game.

"He's been one of the faces of baseball for forever now it feels like," Howard said of Harper. "For him to be a Philadelphia Phillie for 13 years, or however long, he's definitely looking out for younger guys in the system. He's really trying to integrate himself into the whole Phillies organization and it's really cool."

On Twitch Thursday, he was commenting on another complicated situation.

Howard, like Bohm, is a top prospect in the Phillies farm system. Both are on the cusp of breaking through to the majors at 23-years-old and each is in the 60-man player pool to start the year. Will they get invited to stick around and make it to the 30-man opening day roster on July 24th?

"There's no hard feelings about it," Bohm said. "It is what it is. That's a thing they can do — it's business. I am not going to hold any grudge about it."

The "it" to which he is referring is commonly referred to as service time manipulation. Once a player makes his MLB debut, it sets off a ticking clock of team control that typically lasts six full seasons — three that have them paid a scale salary and then three more arbitration years. Only then can he become a free agent. Realmuto, for example, is playing in his final arbitration year. If Howard or Bohm open the year on the big-league roster, they have six years. But a team can delay the start of that clock by a full year by simply not having said players on the roster for the early part of the season. And due to the prorated 60-game season set to begin next week, they'll only need to be held back for a few games and the Phillies can keep both Howard and Bohm under team control for an extra seventh year.

"There's not much I can do about it other than just take care of my work every day to try and get a little bit better," Howard said. "What they choose to do is up to them."

The writing seems to be on the wall, baring an unforeseen injury or COVID case, that both players will start the season with the "taxi squad" in Lehigh Valley before getting the call up sometime during this season. Which makes sense for the team long term — Harper gets it.

But both probably are good enough to begin with the 30 MLB players in Citizens Bank Park based on merit.

"I'm glad he's on my team, that's for sure," Bohm — who says his glove has caught up with his bat this preseason — said of Howard. "Spencer, he's one of the best guys to have in the clubhouse. He is unfazed by anything. If he gives up five runs, which is pretty rare, he's the same guy in the locker room and he's electric on the field. He is great to play defense behind, he has has great pace."

Still, it's got to feel great to have Harper campaigning for you.

"I didn't hear anything about it until this morning," Howard said via Zoom. "My parents called to ask me about how I was feeling and my dad mentioned it and I just saw it on the way over here."

You might be able to tell from reading that quote, but he was smiling pretty big.